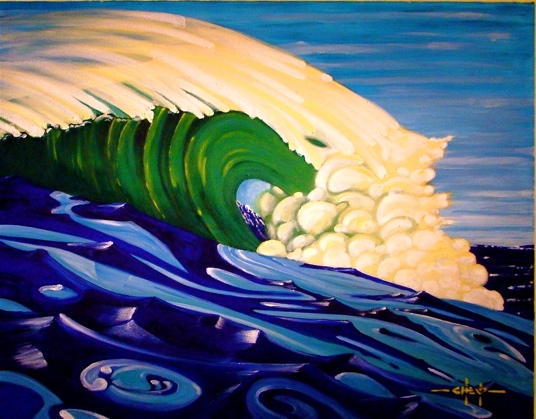 Stan Chew's West Peak
Stan Chew has lived and surfed in Hampton for 30 years. He studied Fine Arts at Jacksonville University and University of New Mexico. He's also a professional musican who's been playing since the 70's. The guitar is his main instrument and he's playing as much today as he did back in the day. His art influences are HC Wyeth, Bill Odgen, Maxfield Parrish and Rick Griffin. He's sold more than 50 original paintings. He currently lives in Europe where he's working on a new collection of art. His long term plans include you and me. Huh? He's opening a creative Surf Retreat in Panama in 2008 catering to surfers, world travelers, musicians and artists who are seeking inspiration and barrels. And isn't that what we're all looking for? I'll be seeing you in 2008 Stan...you can count on it.
Oil on Canvas by Stan Chew

Stan Chew's Water Fairy
Stan is that what we can look forward to in Panama? I mean more paintings like this...
Oil on Canvas by Stan Chew