Hard to believe there's no surf today. Seemed like we were getting waves every week there for a while. Most weeks it was that Monday swell that kicked off the whole week. Last Sunday was the last decent day of waves for this winter. Today is the First Day of Spring. I may be going out on a limb here when I claim this but...' I think the winter of 2005 will go down in the Surf History books as one of the all time best winters we've ever had. Maybe the best ever.' I mean was that one hell of a Winter we just had or what? So... ' What say you, my 6mil brothers and sisters?'

Spring time brings many things, but one of the few things it does bring that we could definitely do without is, onshore winds. I know we get our fair share of clean Spring Swells every now and then, but this is the start of the onshore wind season. It's all downhill from here kids.
I'm already missing those weekly monster swells.

Last week I mentioned that I wanted to take on the subject of Discovery. Now Discovery is nothing new in the eyes of anyone who's been doing this for sometime. I mean, if you really surf and you have traveled both here and abroad then discovery is something you live with. Now for the sake of argument, 'Surf Discovery' does not necessarily mean you have to board a ship and travel to some Third World Country. Hardly. You can make discoveries right here in America. Or, to be more specific, the East Coast. Or, dare I say...you can make discoveries right here in New England!

All you gotta do is open your eyes.

One of my favorite quotes of all time is by Albert Einstein.
"Imagination is more important than knowledge".

One of my own (original quotes) and I use this one all the time.
"If you can drive by it...it ain't a secret."

Think about that one. Raise your hand if you've ever driven by a break that looks inviting but, you never bothered to surf it because of a number of reasons. You know dam well you've done that. I'm guilty of it myself. Look, we live in a time of ultimate convenience.

Yesterday 1966. Peter Stokes Discovery.
This photograph reminds me so much of a photo from the 60's that ran in SURFER. It was a photo of a couple of guys eating Vanilla Wafers while watching the surf at the Ranch. Once again, a mirror image of what East Coast Surfers were doing while the West Coast Surfers got all the fame and glory. Somewhere in Massachusetts.
photo courtesy of Peter Stokes 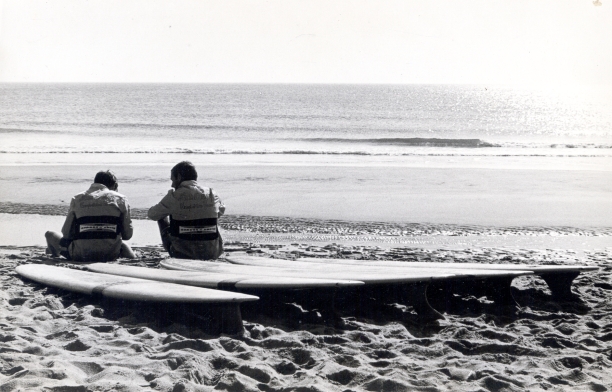 Yesterday 1967. Peter Stokes Discovers That You Don't Have To Be
In California to Get a wave like this.
East Coast Surfer Peter Stokes gliding down the face of a wave that could be anywhere in the world.
But it was here in New England in 1967. photo courtesy of Peter Stokes 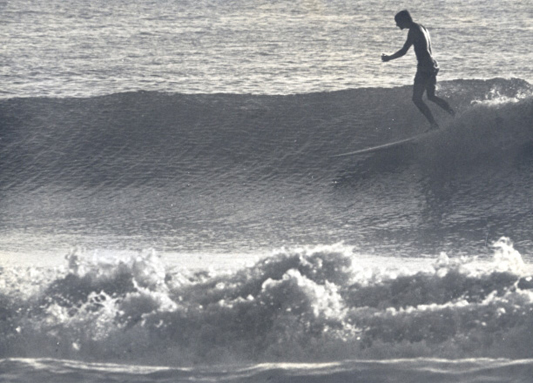 Everything we do, is geared to keeping us from doing less. Nothing's fast enough for us. Gotta have Internet access and it's gotta be quick. Don't have time for dial up anymore. I CAN'T WAIT 30 SECONDS!
I DON'T HAVE TIME TO WAIT 30 LONG SECONDS. There's a whole generation of surfers who have grown up with this kind of
' I need it now ' attitude. There's no imagination left because we've all been robbed of it. And that my friends, is the true essence of Discovery. IMAGINATION.

I don't think I've ever been anywhere in this great big world and not looked around the corner ' just to see what's there.' Hell, I've made more surf discoveries right under the noses of so called "Locals" only because they couldn't be bothered. I've got friends who to this day, are constantly on the hunt for more discoveries. My friend Jeff Chamberlain who heads up a hearty crew of Surf Adventurer's in California scour the coast in their little boats looking at every cove and hidden point and reef. And you know what? They find new spots all the time. IMAGINATION. Lenny Nichols found spots on Oahu in his craft.Yes I said OAHU, HAWAII. I know he did, because Kevin Grondin and I surfed there with him. IMAGINATION. I've been part of discovery crews who have surfed and named so many different breaks in so many places from right here in New England to the Last Frontier of Novi Scotia. I've personally found spots in New England as recent as last year. And all because of a little IMAGINATION. You just have to open your eyes and see. There are so many more places just waiting to be discovered by those who are willing to work at using their... imagination.
The next time we have a big swell, instead of gathering like sheep to slaughter, all sitting on a single peak watching boards and bodies collide, step out of the box. Walk away from the light. Yes, you may get a lesser quality wave, but, you may get MORE waves and have MORE fun.

Like my Westie friend Jeff says; "We Know It's Out There and We Want Some". That just about sums it all up.

Have a Blessed Palm Sunday to all my Religious friends.

Get strong and healthy RICK EVANS! We all can't wait to see you back in the line-up. It's been a longtime brother. And you can have any wave you want when I'm out there.


Click On Wave to Go Back to The Top.
Today 2005. Palm Sunday Discovery
Somewhere in Southern California. If you've been there you know where. If not...well them's the breaks.
*Note. Not all discoveries are kept a secret. Photo courtesy of The Phantom 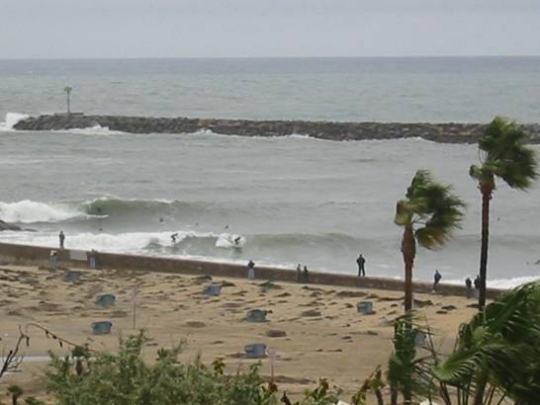 Today 2005. Last Week's HUGE Centro Cal Swell
Somewhere in Central California. Where? Be serious. I will say this. My friend Doug Hendry was out there this day.
Those are boats moored off to the left. This day was the biggest day in 2-4 years at this spot. Doug who's 50 years old
was charging it this day. Good on you Douglas. Photo courtesy of The Phantom 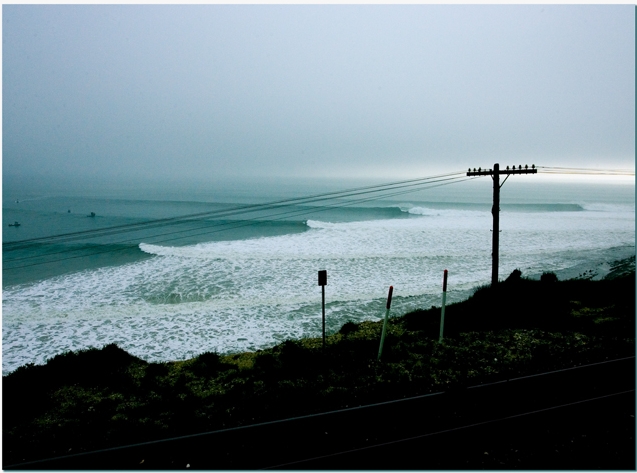 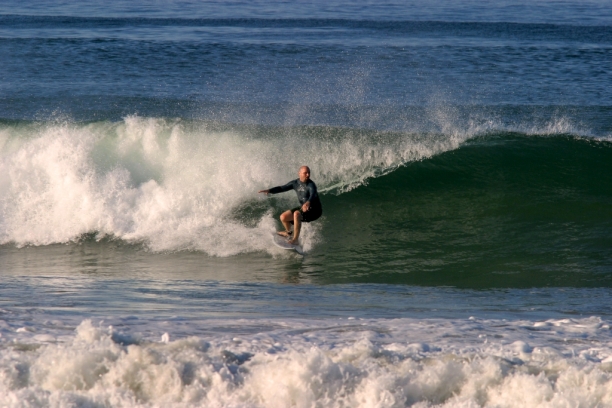 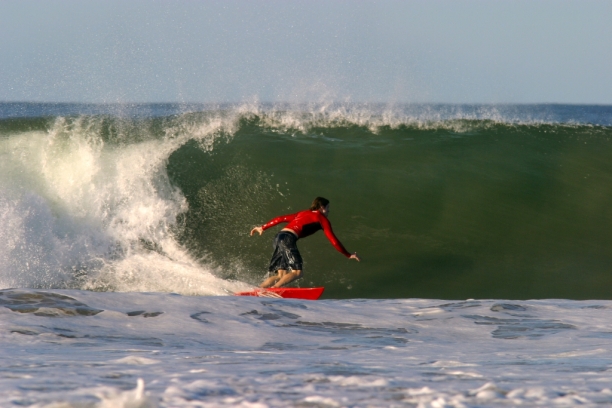 Today 2005. March Madness.
This is Mike Keefe surfing a spot that he discovered in Costa Rica last week.
photo courtesy of Dale Keefe 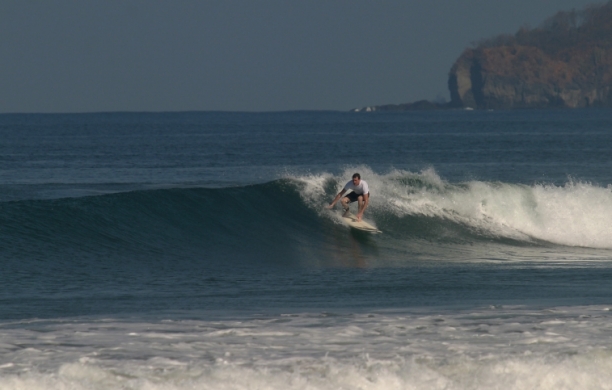 Today 2005. Jason Alix Discovers a Dream Spot in South Africa
This is a photo that Jason sent me this week. Just he and a buddy surfed this spot. No names. No maps.
Use your imagination. photo courtesy of Jason Alix 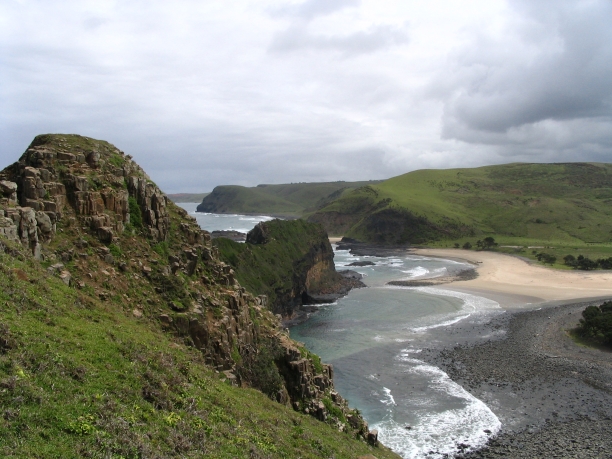 Today 2005. The Luck Of The Irish!
This photo was taken somewhere in Western Irelend. Looks a lot like one of our Point breaks.
Ahh but she's not laddy! Tis somewhere at the end of the rainbow in Western Ireland!
photo courtesy of James Reidy 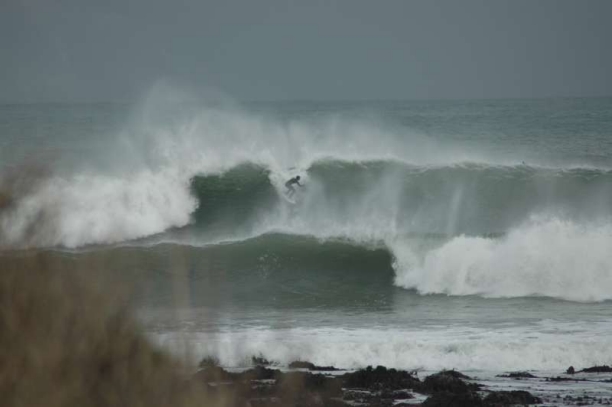 Today 2005. Recent Lonely Outer Reef Discovery.
100 miles out and off the coast of California. Cortes Bank looks inviting form the glossy magazine photos. But I'm sure it's a whole different beast when your facing the tiger. Sharpen your teeth boy. You're gonna need all the bite you can muster.Rider unknown. photo courtesy of The Phantom 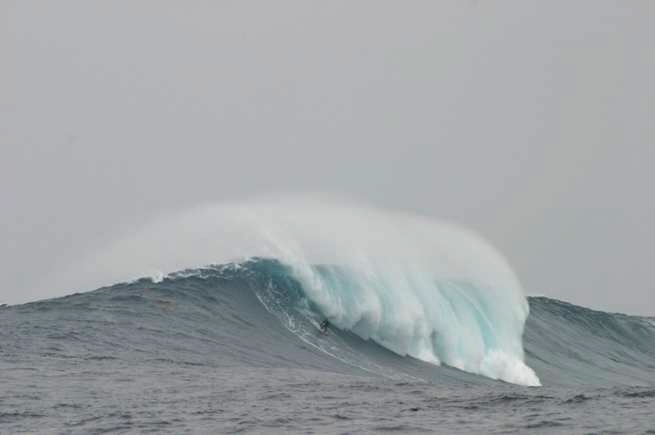