Little late this morning kids. Sorry about that. I don't really have a deadline. It's not like Dave is watching the clock and screaming at me to get the weekly column up. However, I like to try and get this column done by Sunday night. Most times I succeed. Other times, like yesterday, I get hung up. And (big surprise), it's usually due to surf related issues. I did have a full day yesterday. Starting with snow blowing my driveway for the millionth time this winter. Then I shot some early morning surfing. It was so beautiful with the snow and all. Then I went snowboarding for the day with my two nephews and son. We tried to get back in time to get a surf in, but, our aching muscles and the waning light put the Kabash on that plan. Ever done that? Snowboard and surf in the same day? It's cool if you can pull it off. Because of our close proximity to both the coast and the mountains, it's possible to do. I've done it several times. You should try it if you haven't already. Then you can tell your grandkids one day. "When I was your age Spunky, I went surfing and snowboarding in the same day and I didn't throw up in the dam car!"

The surf and snow combination is almost getting tiring. I say almost, because come this summer we're all gonna be wishing for something to ride when those flat spells come rolling in. And you know they're coming. You do know that don't you? You older mature surfers certainly know it. But you youngin's might not. It will be flat for days on end with no relief anywhere in sight. And it's during those desperate moments, that we'll think back on this winter and wish we had another day of snow and surf. Oh, it's coming alright.

So be careful of what you wish for.

Yesterday 1966. Peter Stokes Toes On The Nose
This is the first photograph of a series of photos that Peter brought to me on Saturday. Peter has a vault of old photos that I will be featuring here in the weeks to come. Peter responded to my request for Old Photos and let me scan a batch of great old stuff. This particular photo was taken somewhere South of Seabrook Beach and North of Plum Island. It's a place that had a low budget Steak named after it. Can you guess where and what the hell I'm talking about?
photo courtesy of Peter Stokes

There were quite a few comments in my email box over last week's display of WipeOuts. I thought it was a different approach to the weekly photo page. I mean, all those wipes happened in the same week. I also got several more photos from California. They had quite the swell. Some of that stuff was impressive. But I have to say, as impressive as their photographic evidence was, it pales in comparison to what we deal with all winter. Yes, they get bigger surf. And yes, their swells are more consistant than ours. However, our extreme winter conditions puts a whole other spin on what we have to endure. Look, if you know any native west coast surfers, or, any warmer climate surfers, you know that they cringe when they hear what we deal with on a regualr basis during our cold months. In other words, from November to March, we get some big swells and we deal with weather that would send most of those trunk surfing wooses running for their Hot Tubs! Stand tall and proud my Easties! You are the Real Winter Surfer. Make no mistake about it.

Happy Saint Patricks Day to all my Irish friends. Although I have no Irish blood in me, I wear the green on St. Patty's Day in honor to all of you who bleed the green blood. My wife and kids have some Irish blood in them, so I am near and dear to you...my McSurfers!

Next week I'm going to write about discovery. Both here and abroad. So think about your own surf discoveries and maybe drop me a line.


Click On Wave to Go Back to The Top.
Today 2005. Two More From The Nichols Gallery
Lenny snapped theses babies when he wasn't snapping turns at the Rocks this winter. Nice work Len.
Photos by Lenny Nichols 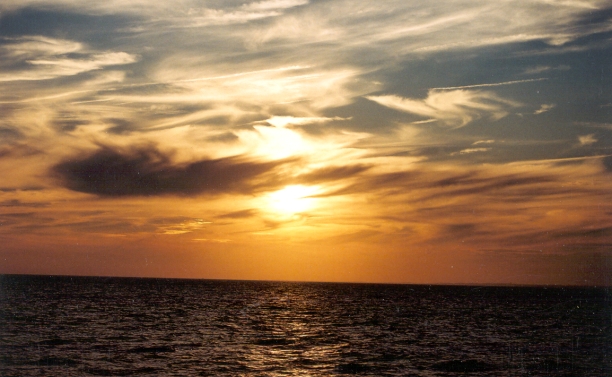 
Today 2005. Yesterday (like yesterday Sunday). March 13, 2005
This is Marky Jowett taking a cold drop after the latest snow fall. Mark had to wipe the flakes off his brow and mustache before paddling for this lone Gray Wave. Mark is a big boy. Well over 6 foot tall. So, it's safe to say this wave is overhead.
Video Still Frame by R. Fatello SFOD 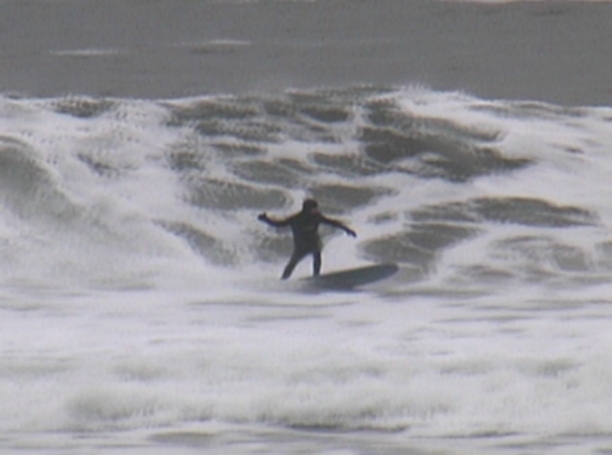 Today 2005. Young Mexican Grom on a Warm water face.
Mike Lantaigne sent me this photo last week. It's a nice photo of a young local Mexican Grom ripping the snot out of this hairball reef somewhere near Trocones Mexico. Looks a lot like Mark's wave (above) except a tad warmer.
photo by Mike Lantaigne 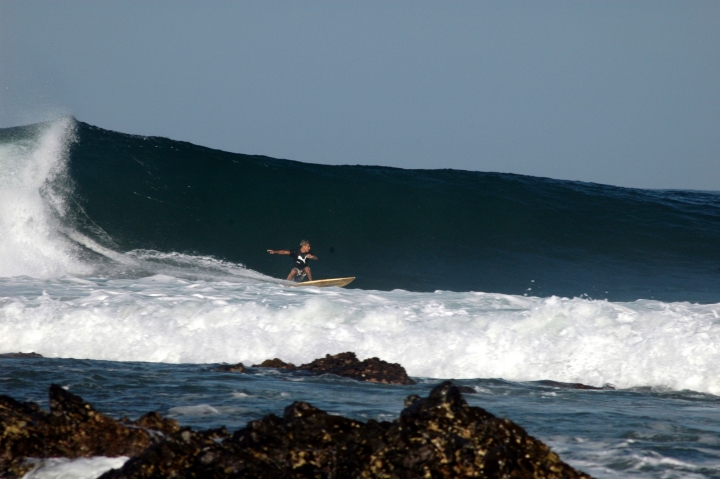