June 27th Newsletter 2004
I saw something today that I have not seen in quite sometime. It was a hollow, offshore groomed, bluegreen wave. I saw this as I was floating in the inside line-up in today's small but fun swell. The wave itself was not very big. Maybe waist high at best. But it was hollow. I was right in the spot where I could look directly into the pitching lip and see it all unfold in front of me. That one glorious moment in a wave's short life where time seems to stand still. Only those who surf can truly appreciate the sight. I can recall many times in the begining of my surfing life where we would "Mind Surf" the small days. Mind Surfing is simply using your imagination. When the surf was 1' or under but perfect, we'd sit under the Wall and imagine ourselves as tiny beings. You know, GI Joe size, or Barbie size. Well, I saw that wave today and imagined myself as a 8" rider pulling into a steep, triple overhead, super thick barrel. It was intense!
Then, I imagined myself getting drilled into the sand bottom as the thing closed out and unloaded in a thunderous explosion of salt and sand. It was fun to do. Not to mention safe.

Imagination is more important than knowledge for all East Coast Surfers.

Boy it did feel like summer today. Lot's of people on the beach. Longboarders, shortboarders, beginners and old timers. They were out in force. I had a French Canadian paddle up to me (that's being kind...I wouldn't exactly call it paddling) and ask me to teach him to surf. "What?" He pleaded with me to give him a few pointers. I did. But it was no use. He was on a board that was too short for him.That and the language barrier proved futile. He ultimately got in my way on three consecutive waves."No no noooo...I told you when someone is riding a wave you have to back off"! He looked at me and gave me the thumbs up sign. I just shook my head.

I could see Jack laughing at me out in the lineup.

Yesterday. North Beach Looking South. Early 1900's.
Look at this photo. Then look at the wave cam shot. Look at the point with just the one house on the bluff. Look at the Wall...there is NO Wall! Imagine being a surfer in those days. Of course there were no boards. Imagine how many empty waves poured through without anyone to ride them. If Time Travel was an option in the future where would you go? 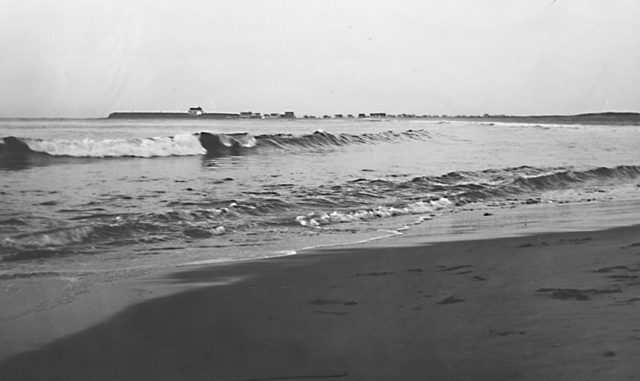 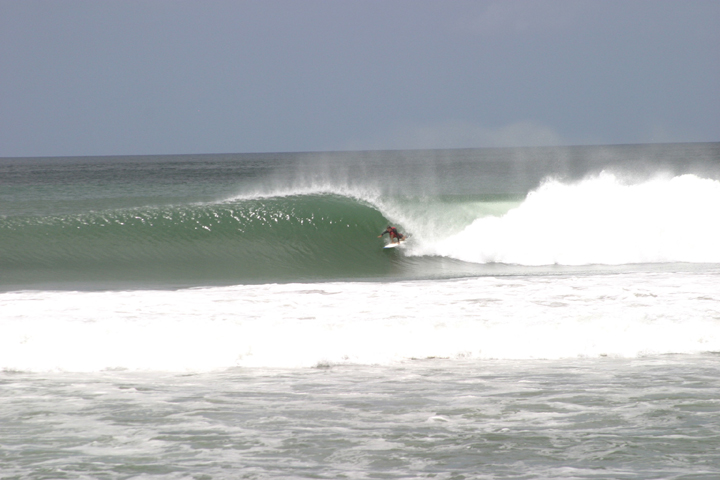 Today. Central America.
This photo was taken last Friday. Look at this perfect wave. This is a spot that was recently discovered in a remote region somewhere between El Salvador and Costa Rica. Some of the Hampton boys are headed there this week. We hope they score surf like this. We hope they bring back some decent documentation of their travels. What would you do on a wave like this?
photo courtesy of Henry Morales of Wave Hunters

The Bocce Boys had the Opening Day Ceremonies of the Long Awaited Annual Beach Bocce Season. The Kick-Off Match today was being played by the following players. Jack, myself, Lenny and Skip. Though these men are not exactly of the Olympic caliber, they do play what they call "Extreme Bocce". Be forewarned: It's not for the purists of the game. We play in the rocks, in the water and deal with all the summer beach elements. Tourists, lifeguards, kids, you name it-we deal with it. Rookie righthander Skip took the first day narrowly beating the competition. This despite his one DQ followed by several warnings from the Commission.

It is truly summer when Extreme Bocce is being played on the beach.

Lenny had to postpone the ESA contest yet again to the following weekend. It's not easy running a district and running contests. Imagine if other sports had to deal with the lack of playing fields like surfing. Can you picture it? Sorry, there will be NO Football Game today. Why Not? The field didn't show up! In surfing, sometimes the field just dosen't show up period. Or, sometimes TOO MUCH of it shows up. It's a tough call for Lenny but we think he's doing the right thing. There used to be a ESA director who would run contests in any size surf. I mean anything! That's not right. We agree with the call. Wait it out. The surf will come...won't it? Of course it will.

What do Dave Cropper, Cory Fatello, Kyle Linseman and Mike Tyson have in common? If your guess was Gold Capped Teeth and facial Tatoos you are wrong ( I hope). Nope, the correct answer is June 30th. It's their birthday. So Happy Birthay to them and to anyone else born in June. Hope you got to surf on your birthday!
Well, That's it for this week kids.