For the record I didn't say it. Say what? I didn't say we were in a Flat Spell. However, Dave did. He said it in his daily wave report on the Wave Cam page. I on the other hand, will not say we're in a Bona Fide Flatspell until, it goes over the two week mark. It's only been a week. One week. Seven days of no waves. No need to panic just yet. I will say, that having been doing this thing (Surfing) for some time now, I can almost feel it, creeping in on us all. The Hot, steamy, humid days, the ice cold ocean water, the non user friendly jetstream...it's all coming together and it's not good. However, I personally can't complain just yet. Not after the Winter and Spring we just had. How can I? How can you (if you surfed all winter)? Simply put, you can't. We all can't. And I won't...not now anyway. Ask me in a couple of weeks though. I may have a different opinion, but for now, I'm living with the residue of last Winter/Spring Swells in my mind.

Ok, I keep getting asked the mystery question of the month. What's that? Well, I'm talking about the dude with the Red Longboard on the Homepage of this website. People ask me as if I would know. Truth be told, I don't know who it is. Or, just where exactly it is. I have my own opinion about who and where it is. Even Paul is clueless. And he was the one who put it up. Now, for the sake of clarity, I'd like to throw this out to the masses. If you know who it is, and where it is, email me. The first right answer gets a ...free...bar of wax! What? Did you think we'd throw in a Free Trip to Tavarua or something? Be serious. Get cracking on this mystery you little Sleuths, so we can all rest easy knowing who he is and where he's standing.

Last night I got to jam with some fellow local surfer/musicians. Dave Cropper's band KINGS HIGHWAY played at a party on the beach and my nephew Jesse and myself got to sit in and play some music. It was a freeform jam. Kind of like Soul Surfing. Totally unscripted, but completely inspiring. The thing about a good jam is, you never know where it's going to take you or the people who are listening and watching. We reached some creative levels last night. Some of you know that I played music in bands for a longtime. I've played from 25,000 people in the Meadowlands to a handful at a local party (like last night). The most fun I always have is, when it's some local friends, who have common interests in both music and surfing. Like last night.

Dave played guitar, Steve played bass, Salt played drums, my nephew Jesse played keys and sang and I played guitar and sang. It was fun. My nephew Jesse is pretty serious about his music. If you ever get the chance to see him, or hear him, you won't regret it. His song "The River" is featured in my movie 13POINT5. He surfs and he's very talented. Now, I'm not saying this because he's my nephew (well maybe a little), I'm telling you the truth. Ask Crop or any of those other guys. Jesse is the real deal. Check out his band The Resonance at this website http://www.sonicbids.com/theresonance

You'll be stoked to see him live. Tell him his uncle sent you.

Got good surf pics? Send em off to me directly. (See link below) Just make sure they're NOT huge files. In fact if you have any questions about the size, email me first and I'll write back.
Start shooting crackie!!
Ralph Pic Of The Week

Yesterday 1978 Mike Doane negotiates a Pending Lifestyle Change
My buddy Jeff took this photo in the late 70's of an old friend of ours, Mike Doane. At the time this photo was taken Mike was thinking about his upcoming marriage. Some friends threw a bachelor party for Mike and they made up T-shirts with the writing "Don't DO IT Island Mike!" Everyone wore them at the party. Mike of course, went through with the wedding. And as far as I know he's still married. However, I have not surfed with him since. Mike, if you're out there, please tell me you didn't give up surfing. Photo by Jeff Crawford

Lenny (NNE-ESA) had to pull the plug on the contest for the weekend. The surf didn't show up. It's a tough call for a contest director to make. You need marginal surf for the kids to compete, but you need some kind of decent surf for the Juniors and the Mens. The sport of surfing is so much different than any other sport. Sometimes our field doesn't show up. Can you imagine canceling Football Games because the field was not there. Or canceling a Golf Game because the course was missing 3/4's of the Greens? It's not easy this competitive surfing.
Of course there's the other side of the coin. Sometimes, TOO MUCH of the field shows up. Having witnessed young 10yr old Groms faced with HUGE surf at contests, I can tell you first hand, that's not easy to deal with either. Feast or famine. In either case, the First contest is on call for this weekend. Saturday July 2nd at the Wall. 10th Street to be more precise. Keep yer fingers crossed.

Speaking of 10th Street. I stopped by the other day and noticed that there were about 30 to 40 teens hanging out near the opening. I'm going to challenge each and every one of you to do something. That is, to take a stand, to protect that piece of cement. That sacred ground. Where generations of Surfers have walked and surfed and hung out at. It's up to you, to keep it clean. If you see someone throw trash, or break a bottle you need to take a stand and make sure they pick it up. If you see anything that might cause trouble (public drinking etc etc) you need to take a stand and protect it for all of us. Respect for the local population and the beach and waves. It's up to you, to hold your ground and protect our beach. Respect our beach.

Ok class it's time for the 2nd installment of:
"Ralph's Tip of the Week".
Last week we talked about Holding On To Your Board. Remember? Hold onto your board at all costs. This week's tip is called TAKE THE HIT. It's about paddling. You know, if you're paddling out and someone is riding a wave and they are coming towards the path of your paddling. DO NOT TRY TO PADDLE FOR THE SHOULDER of the Wave. INSTEAD, PADDLE TOWARDS THE WHITEWATER and TAKE THE HIT. So many people try to beat the rider to the shoulder for a number of reasons. Maybe they think they can get their faster by paddling. Wrong. Maybe they don't want to get their hair wet. Wrong. Maybe they just don't know what to do. All of them wrong. Look, it's simple. Just paddle into the whitewater to allow the poor sap who's riding, to finish his or her ride, without having to deal with someone trying to beat them to the shoulder. How many of us have had to straighten out because someone was in the way? My hand is raised.

Paddle into the whitewater. Sacrifice your dry head. Take the hit. It's only water. Big deal. You get wet. Maybe you get dragged a bit, who cares? Think of the good it does. You allowed someone to finish their ride and maybe the best section of the wave happened after you took the wave on the head. If it was me who was riding and I saw someone paddle into the whitewater to allow me to complete my ride. I'd be happy. So happy I'd thank them and give them a wave.

Next week's Tip will focus on Dropping in. Stay tuned...

Today 2005. Surf Camp North West Canada Style.
Look, I'm not exactly into roughing it when it comes to surf trips. Not at my age anyway. I'm into the comfort of Hotels, Air Conditioning, Room service, laundry service, clean bathrooms and well, you get my drift. My friend Jeff is the complete opposite. He relishes the adventure of camping out on some isolated coastline that's rife with both Bear and Wolves. They cook their own food, pitch a tent, dig a hole for a bathroom...you know...they ROUGH IT. All in the name of adventure and discovery. They usually find what they came looking for. Peace and solitude, with a decent pointbreak around the next corner. So here's a big salute to all of you Adventurers out there. I'll think of you next winter when I'm ordering room service after surfing a crowded day at Marias in PR. And a part of me, will wish I was with you. God bless you all.
Photo by Jeff Chamberlain 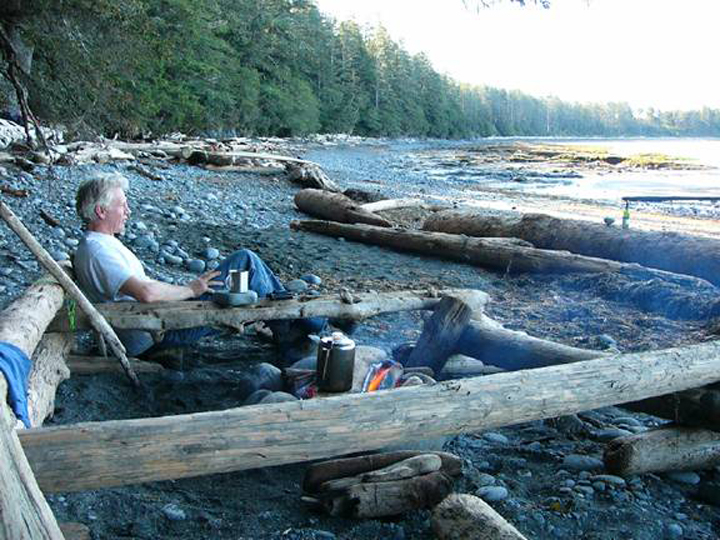 Today 2005. Northeast Canada Collage
When we went to Nova Scotia in 1971, we roughed it. I mean we really roughed it. I was into it back then. I was younger and full of piss and vinegar. Today, I'd still consider "roughing it" if I could get waves like this. I may have gotten softer in my old age, but my imagination is still very active.
Photo courtesy of The Phantom 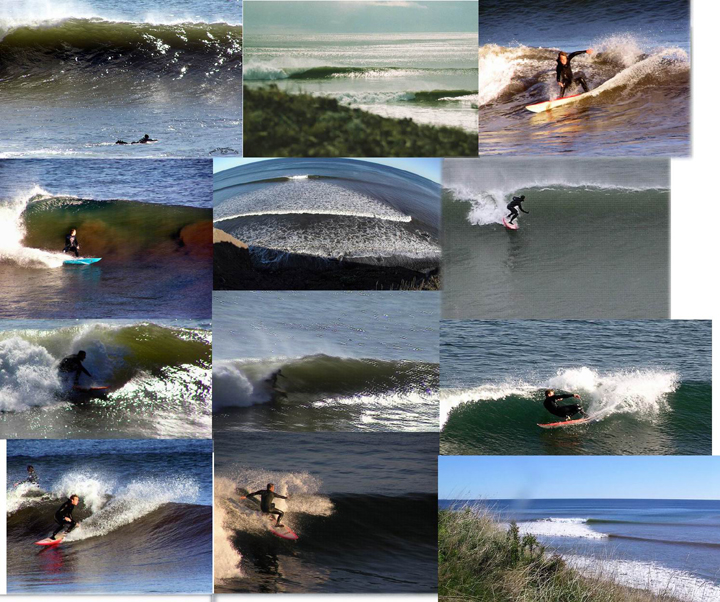 Today 2005. Tropical Perfection
How bad do you want it? Look at these waves. How long would you wait in a crowded line-up to nab just one of these Blue Dreams? An hour? Two hours? Some people wait a lifetime for the chance. This is the home of New England Transplant Steve Magliano. Stevie I'm coming to visit you brother this winter...tell the boys to let me have just one. Please.
Photo courtesy of The Phantom 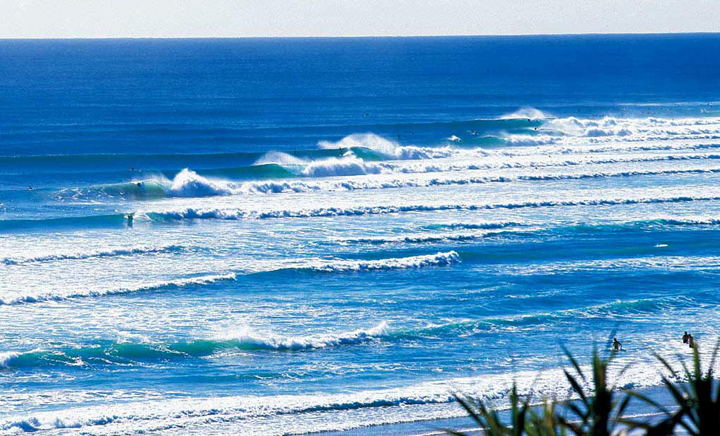 Today 2005. West Coast Seclusion
A friend of mine Tony Sczabo (ex-NH boy) hiked a long way to find this Gem. I don't see anyone else around. Do you?
So my guess is, Tony had it to himself and whoever he hiked in with. How far would you walk for a wave like this?
Photo courtesy of Tony Z 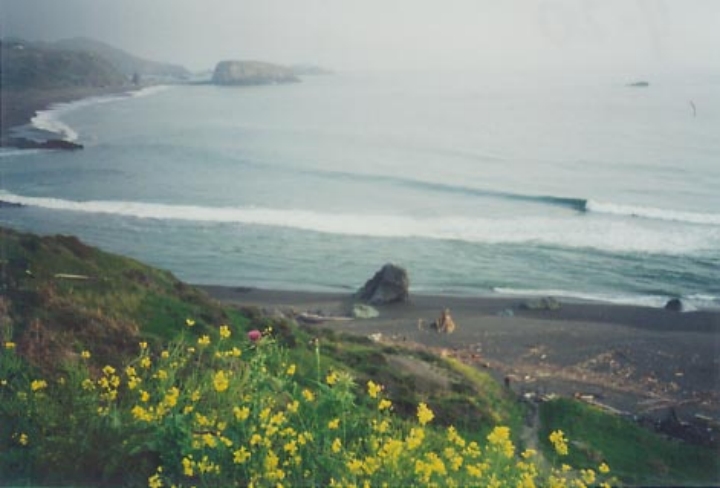 Today 2005. Big Ass Cloud Break
Taken last week in Fiji. How far would you run to get away from a wave like this? As far as it takes.
Photo courtesy of The Phantom 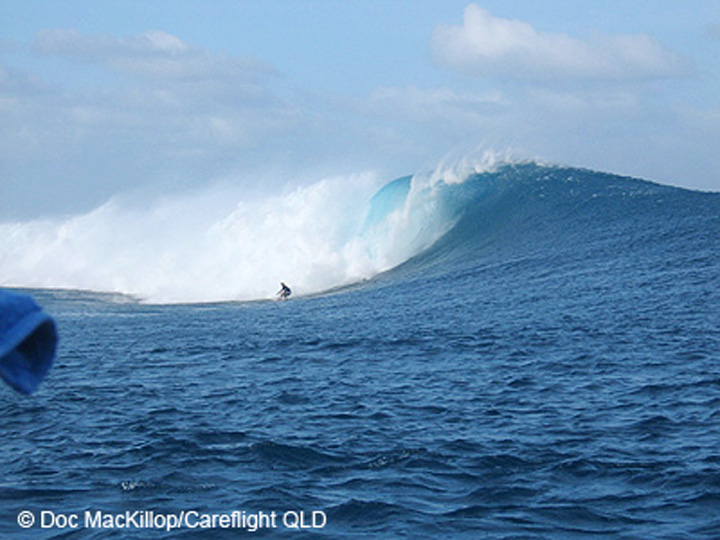 Today 2005. Blue Angel's buzzing the locals
This shot is wild. Look how low this guy is flying this thing. My guess is he's moving at a pretty good clip too. I'm also guessing that he's loud. Like in real LOUD. Cool stuff.
Photo courtesy of The Phantom 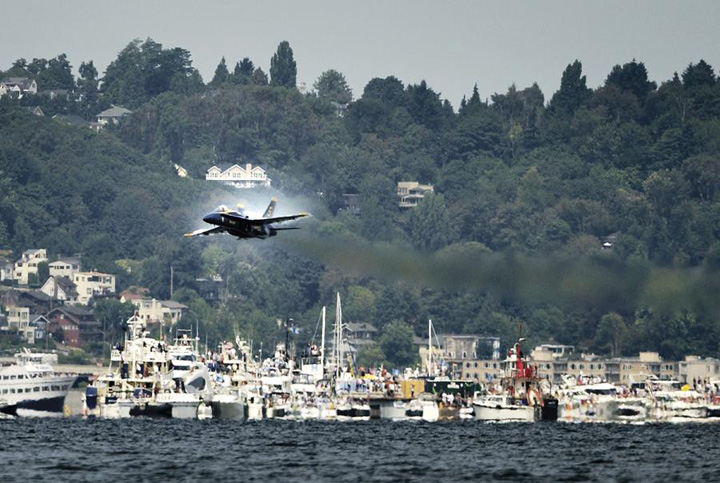