Thank you Tropical Storm Arlene. That was a pleasant 3-4 days worth of early June surf. Not epic by any means but clearly worthwhile. There's an old saying..."If a Point Breaks in the Summer, Will They come and surf it?" The answer is a resounding YES. Well to be honest, there's no such saying, I just made it up. But it sounded good, didn't it? Truth be told, they did surf the points this past week. And let me tell you something friends, anytime it's big enough for the points to break, it's good enough to say Thank You.

Today is Father's Day. Last month I wrote about the Moms and gave them their much due accolades. Today, it's the dad's turn. I know so many surf dads. All over the world, dads who surf are being acknowledged today. That's got to be the coolest thing for any surfer who has a dad that surfs. I mean come on. Sharing waves with your dad has got to be one of the best feelings for any young surfer. Unless of course your dad is a wave hog. Then I could see how it might be a drag to surf with your dad. Still, he's your ride to the beach. He's your ticket to filling your belly when you need food. He's your friend's ticket to all of that and more. He's also the guy that will quell any disturbance in the water involving you and a drop-in situation. In short, a surf dad is your ticket to the best thing that's ever happened to you. Surfing.

Maybe you have a father who doesn't surf, but has still been instrumental in your surfing. I know lot's of dads who don't surf, but nonetheless have played a major role in their child's surfing lifestyle. Taking you and your buds to and from the beach (see above), the food, the money for board, wetsuits etc etc etc. You owe him a big Thanks today. I also know there are dads who have no interest in your surfing. But is still active in your life. I'm sorry about those few situations. Some people don't get this thing (surfing). Or they have some preconceived notion that surfers in general are a bunch of losers. We all know that's not true. However, there some bona fide losers out there who surf. But for the most part, we all have our shit together.

My point today, is to honor your dad and thank him for all the little things he's done for you and your family. If your dad lives far away, give him a call. If you lost your father recently, think about the good times you had with him. Maybe call an uncle (dad's brother) and have a good talk with him. When my dad passed away I found myself drawn to my uncles. I found out a lot more about my dad that I never would of known had I not contacted his brothers and really talked with them. Unfortunately, all my dad's brothers have since passed away.
So today I reflect on their memory and enjoy my own status as "Surf dad". I know I'm a lucky man and I am very thankful for it.

Finally, to all the 'new" dads and dads to be. Enjoy these moments.
For they too, will pass like the blink of an eye. Trust me, the hands of time wait for no man. Take the time to take it all in. It's all so good.

Got good surf pics? Send em off to me directly. (See link below) Just make sure they're NOT huge files. In fact if you have any questions about the size, email me first and I'll write back.
Start shooting crackie!!
Ralph Pic Of The Week

Yesterday 1950's. Uncle Ralph w/ little Ralph with my sister Donna) and My dad Gus at the beach
My Uncle Ralph (yes I was named after him) would swim out to Egg Rock in Nahant (Lynn Beach side) everyday in the summer. I don't know how long of a swim that is...I do know it's quite a feat. The last time I sat and spoke with him in the hospital before he died, he talked about those summer swims. I asked him difficult was it to swim that far when the surf was big. He smiled and said "It was hard going out, but a lot of fun bodysurfing back in". What a great memory that was. My dad on the other hand, was solely responsible for me surfing. Ironically, at the same beach my uncle made those long swims at. I had wanted to move to Hawaii to go surfing. I had seen surfing on TV but had never seen anyone surf around here. One day in the late 50's we were standing at the water's edge. There must of been a a strong summer ground swell because I remember seeing these perfect green waves just pouring off in the distance. He pointed out to those waves and said "It's possible to surf these waves if we had a surfboard!" We got a board, and the rest as they say, is history. I owe it all to him. Thanks dad.
I still miss you. Photos by Gus and Eva Fatello 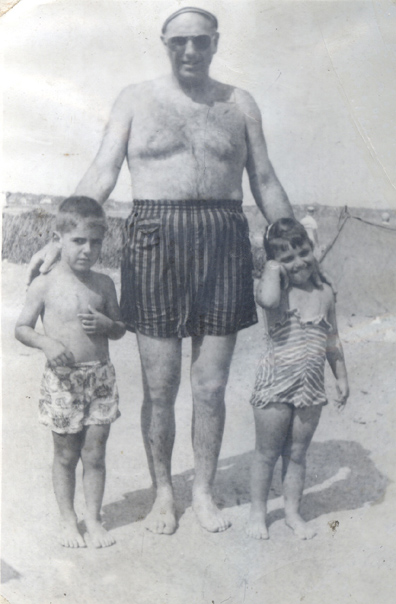 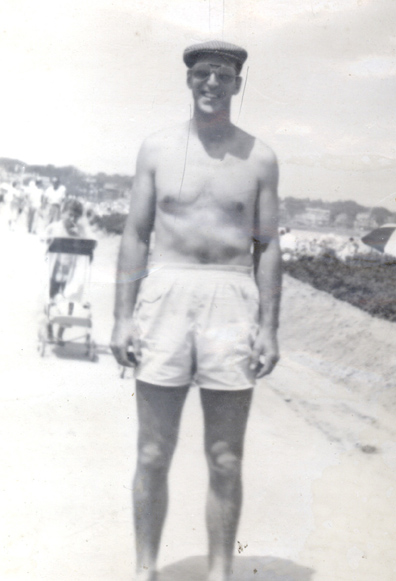 Last week I kind of dissed on the Great Lakes. Ok, I clearly dissed them. But like all Good and Bad Karma, the track that T.S. Arlene took last week brought her right through the Great Lakes Region. My guess is...they got waves from it. Now again, I don't know much about the Great Lakes surf seasons, but if I were to guess, I'd say they probably never get waves from Tropical Storms or Hurricanes. I think they got waves from Arlene last week. And if they did....I'm happy for them. And, I'd be even more happier, if I thought I actually had something to do with it by writing about them. I know that's a weird long shot but, you never know. I'm just glad that Arlene came to her Tropical senses and headed back out to the Northern Atlantic to give us a 4 day stretch of surf. I would of been so bummed had it not. So, did I learn a lesson about dissing other spots? Probably not. I gotta write em like I see em. Sometimes you have to be cruel to be kind.

Hope we get another swell soon...(do I sound spoiled?). The Summer contest season is upon us and the NNE-ESA needs a little help from Mother Nature. It's hard to run a contest for these young athletes when the "field" doesn't show up. I'm sure there will be better days ahead for Lenny and Company. Hopefully, it will be this coming Saturday.

I went to the IOKA last Thursday to see the movie "GLASS LOVE" by Andrew Kidman. It was really good. I mean, it was very well done. Beautifully photographed (they used 16mm) and edited. My kind of Surf Movie experience. In an old Movie Theater on a VERY Big screen. It was great. Too bad the numbers were down. I'd like to think that we all would show more support for Independent filmmakers who tour all over the country showing surf movies. Are we all that plugged into the DVD player? God I hope not. When I was Grom we would wait months for a Surf Flick to come into town. We'd all be so stoked to all go and see it. There's a movement the last few years to bring that stoke back. Let's not let it die out. Let's get out and share the one subject matter that only we get...SURF MOVIES!

Someone emailed me last week to give some tips to beginners. Well, I could write a book on that subject. But he got me thinking. Maybe I should throw in a "Ralph's Tip of the Week". You know, for Kooks and novices alike. So, here's my first tip of the Summer.
HOLD ONTO YOUR BOARD. Do not depend on your leash to keep the board nearby. There's nothing more frustrating then paddling out behind a bunch of people ditching their boards when being hit by a wave. Those leashes stretch pretty far. Far enough to hit some poor soul duck diving behind you. Hold onto your board, it's not that hard.

Next week's Tip will focus on paddling. Stay tuned...

Today 2005. Proud Dad with his little girls at the Northeast Regionals Last Month
Lenny is a father to 5 children. Chris, Nohea, Julia, Hoku and Kai. His kids all love him. He surfs. They surf. It's a Surf Family existence they have carved out for themselves in New Hampshire. Just another Surf dad who lives in our community.
Photo by Arlene Nichols 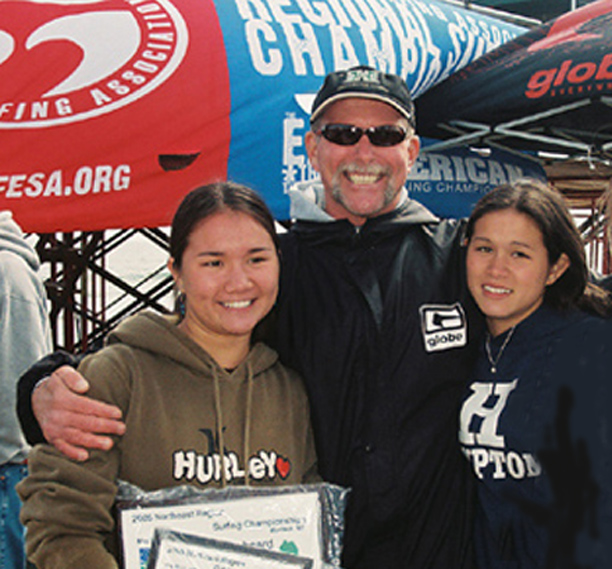 Today 2005. Father/surfer Chris "Shaka" Sullivan Serving Our Country and
away from his kids on Father's Day
Chasing down bad Guys out on the High Seas this past year QMC Chris Sullivan would for sure rather be spending Father's Day with his kids and surfing in New Hampshire. But we are a nation at war and somebody has to take care of business. Thanks for serving Chris, there's plenty of waves waiting for you when you return home. Photo courtesy of Chris Sullivan 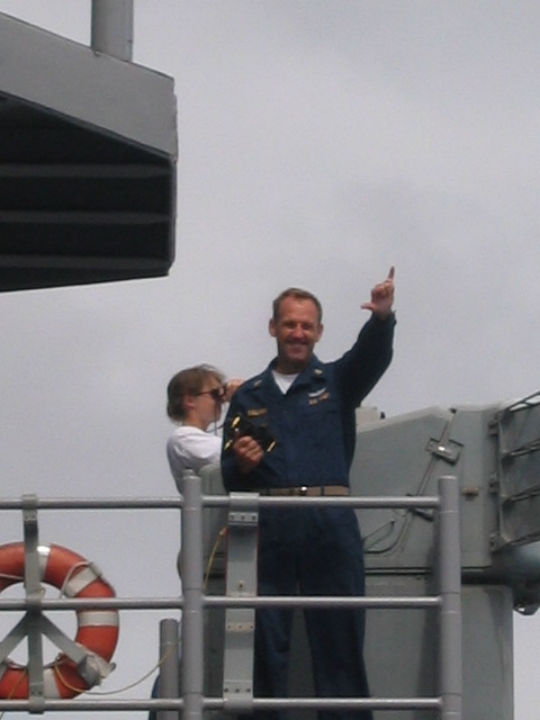 Today 2005. Tropical Storm Arlene visits Hampton
These photos were sent in by Skye Nacel this week. As you can see, Arlene was very good to us. If you scored some of these waves you know what I'm talking about. If you missed it...well...you missed it! Still, there's always the next swell.
Unknown rider on the White board, but that's Nick aka ORGANICK on the yellow.*Skye has a radio show on Tuesdays from 1-3 PM in Portsmouth WSCA, called perpetualmocean. Check it out sometime.
Photos by Skye Nacel 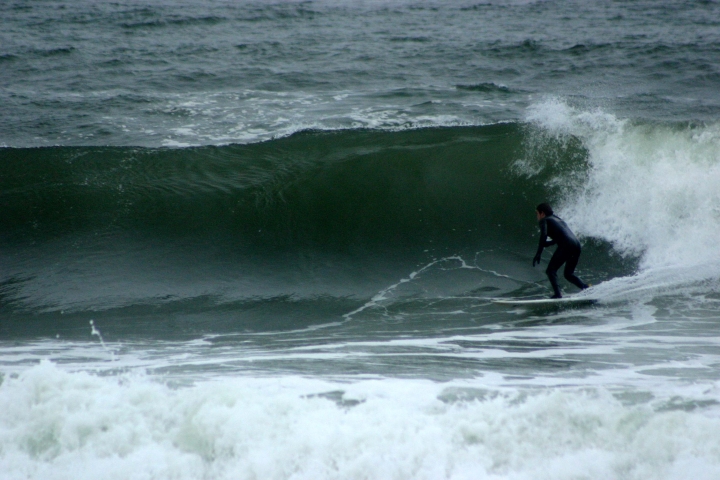 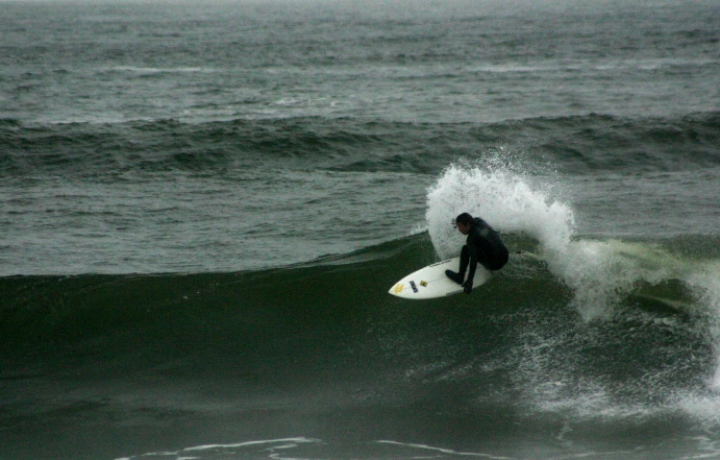 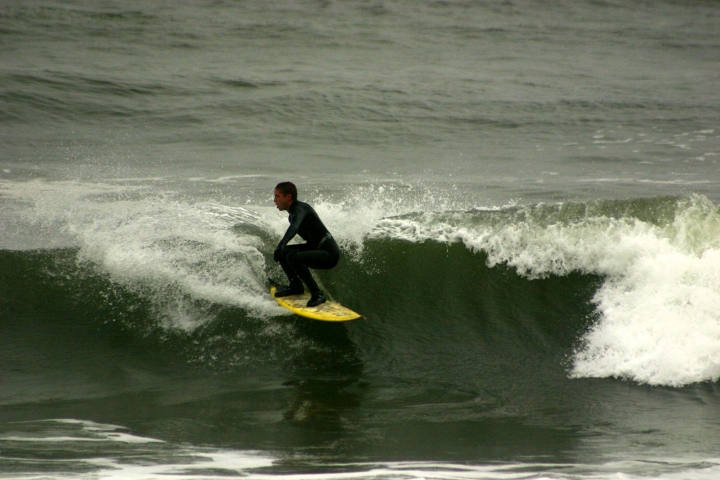 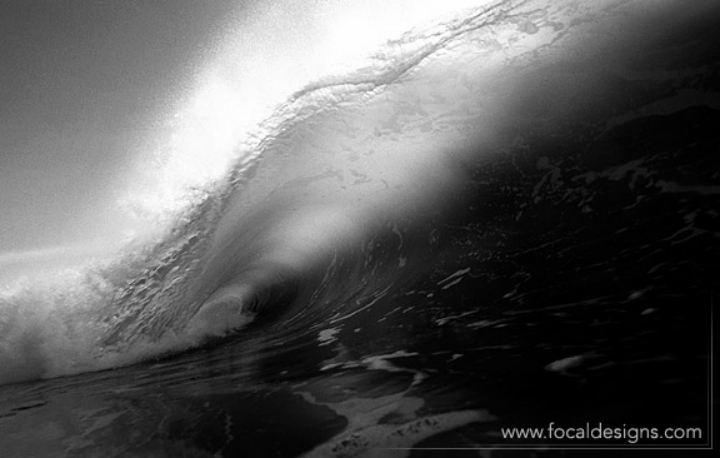 Today 2005. NH Transplants in Costa Rica. The Ride back to Tamarindo.
Justin Pudloski and Dave Dandeneau are from New Hampshire. They love and miss our waves. However, they have not stopped in their quest to find waves elsewhere. Justin sent me this last week. Only a surfer knows the feeling of riding back from a solid surf session. The stoke is alive and well in Costa Rica! Pura Vida!
Photo by Dave Dandeneau 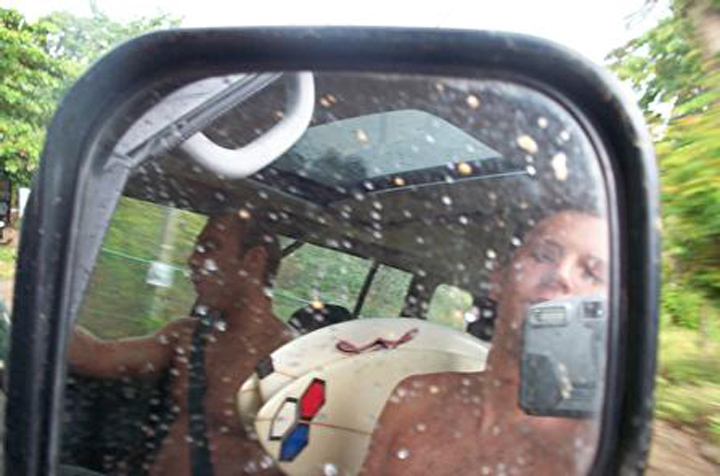