What can you say about this week? You can say the water was warm. You could say that the Red Sox spanked the Yankees on Friday night 17-1. You could say that there's another Hurricane down south while the last one Dennis The Menace is still churning through the midsection of the country. But...you couldn't say the surf was any good. So...another week of weak waves. I still went out on Saturday and paddled around. I got a few ankle snappers and I had fun. And isn't that what the deal is all about? I mean really. It's having fun. I had fun on Saturday afternoon. Just hanging out at 10th Street taking it all in. The Gulls buzzing people's lunches, the locals coming and going, the tourists doing what tourists do. In fact, I secretly do enjoy watching tourists.

Sometimes they do the funniest things. We were watching this one guy who had a water craft that looked like one of the 3 Stooges shaped it. We couldn't tell if it was a Surfboard, a knee board or an ironing board. It was that weird. But that's just the half of it. He was using it as a body board and he was trying to ride it in the High Tide shorebreak. I kept thinking I should get my camera, because this guy looked like he was going to hurt himself. He didn't of course. He just provided some midsummer entertainment on a hot summer day. He'd catch a wave with all of 1 foot of real estate in front of him, only to slam himself and the strange wave riding vehicle into the shorepound. He never got to his feet or made any attempt to ride the freaky stick. He just went over the falls and slammed himself silly. He did this time after time. It really was quite amusing. He seemed to enjoy it too. At one point we locked on each other. He had a big smile on his face and so did I. What fun we were having.

I want to comment on the fact that I did not find any broken glass this weekend. Thank you for picking up your trash and for not breaking bottles. I know that must of been hard for the Moron(s) who are hell bent on breaking bottles. I'm glad to hear that the medication is working. The scene at 10th Street this weekend looked like it should. Clean. A special thanks to those who have personally told me that they were also watching out for anyone breaking bottles. It's not too much to ask for people. We all use the beach. Let's keep it clean.

I was walking along the shore with two of my kids on Friday afternoon at North Beach, when right around 16th Street, I saw a small crowd gathering. Upon closer inspection, I saw what the fuss was all about. Apparently, a young Sand Shark had washed up on the beach and was in the last death throes of his young life. There it was, thrashing about in the wet sand while a Lifeguard kept the crowd at bay.

"Please stand back!" She hollered. "What's going on here?" I asked. "We're waiting for it to die." The female guard answered. "He's an old Sand Shark and he's dying from old age." She continued. "Really?" I said sarcastically. "Actually, he's a young shark and he's not dying from old age. He's dying from the hook he swallowed and the gash on his side." "Just leave him alone sir and step back." The guard countered. Not wanting to cause a scene, I walked away from this bizarre scene shaking my head.

Summertime...it is such a strange time.

Yesterday 1970 A solitary peak for a solitary surfer
A perfect peak is a perfect peak. It doesn't matter where it is, we can all relate to it. And it certainly doesn't matter when. The man made Jetty may have had a lot to do with this perfection. Maybe not. One thing's for sure. Wave photos are timeless. This shot could easily be 2005. But it's not. It's 1970. Taken 35 years ago.
Photo by Jeff Chamberlain 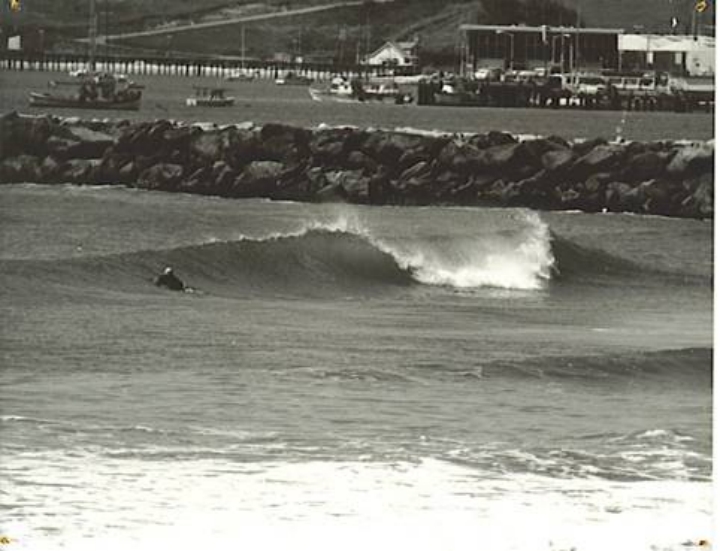 Today, I spent the better part of the morning and afternoon paying my respects to a young man from the Seacoast area who recently gave his life while trying to save his friends. NAVY SEAL Dan Healy was killed in action on June 28, 2005 while attempting to rescue 4 other SEALS trapped on the ground in Afghanistan. They were surrounded by Al Qeada and Taliban fighters. Dan was on board a Chinook Helicopter with 15 other brave NAVY SEALS when it was shot down. Everyone on board that Chopper was killed. Only 1 on the ground made it out alive. It was the single biggest loss of life suffered by the Navy SEALS. The Memorial today was held in Rye at one of the Surf Spots that we all surf. I couldn't help but think about the sacrifice this young father of four had given for all of us to keep doing what we all love to do. Surf. I thought about some of the other SEALS on that Chopper who were all based in Hawaii. I know for a fact that a bunch of them were Surfers. Not just surfers. But Hardcore Surfers. Once again my friends, the price of Freedom is not Free.
"Greater love has no one than this, that one lay down his life for his friends". John 13:15

Today would of been Dan Healy's 37th birthday.

OK kids, it's time for the 5th Summer Installment of:
"Ralph's Tip of the Week".
The last 4 weeks we talked about Holding On To
Your Board, Paddling Common Sense, DROPPING IN, and KNOWING A LEFT FROM A RIGHT.
This week's Tip How To Use That Leash.
Just what do you think that leash is for? Do you think it's some kind of ticket for you to act irresponsibly? Do you really think it's ok to just flail around and let your board shoot out from under you, just because you have your little safety leash on? Are you kidding me? The leash, my primitive beginning friends and novices, is a tool, that is meant to be, a last ditch effort, to control your board. In other words, HOLD ONTO YOUR BOARD! (seeTip number#1). I see more people surfing with total, out of control, abandonment because, they know their little safety chord is going to save their butts from having to (God Forbid) swim. Listen, if you don't know how to swim, or you're not a strong swimmer, then start learning. Or quit surfing. Don't depend on your leash for everything. I've had more near misses because of someone just letting their boards go. Why hold on to your board when you can let the leash do it for you? I see ya jumping off your boards, arms and legs flapping like some kind of a wounded seagull, not a care in the world. Who cares if someone's paddling out? Or standing in waist deep water while your tethered missile is heading straight for their head? Who cares? We do. Those of us with common sense. Let me tell you all something. The next person who hits me with a loose board is going to have to explain that new necktie they're wearing to their friends. Let me tell you something else too. The less you use your leash, the better surfer, you will become. I don't mean to not wear a leash. I'm talking about not using it when it's attached to your ankle. I'll say it again. The less you use your leash, the better surfer, you will become. The better you will feel about yourself and your surfing. Control your craft at all times and we can all live in peace and harmony. Amen.

Next week's Tip How To Wax Your Board (seriously). 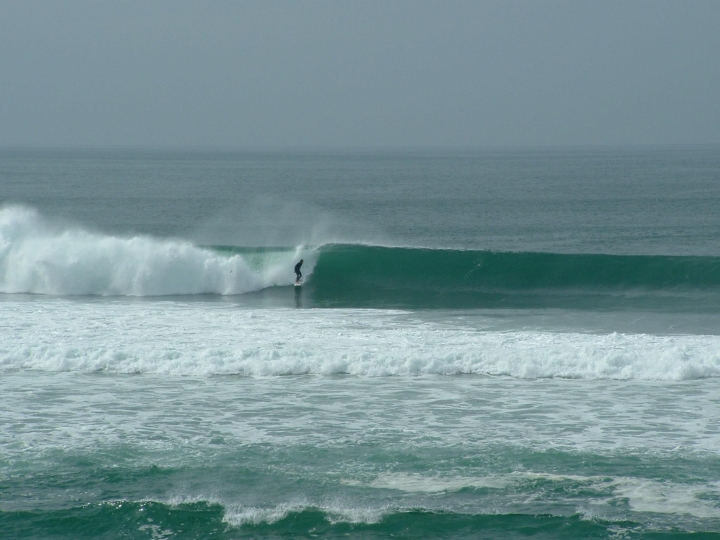 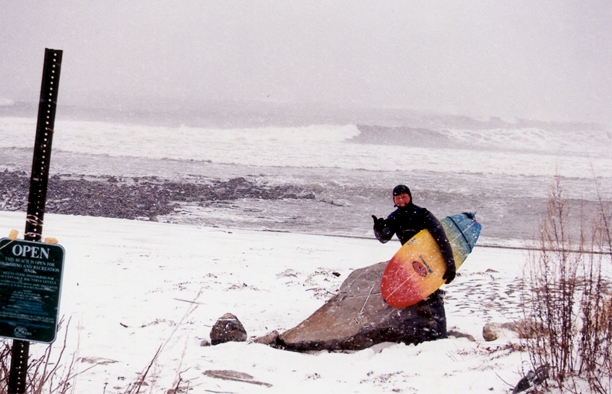 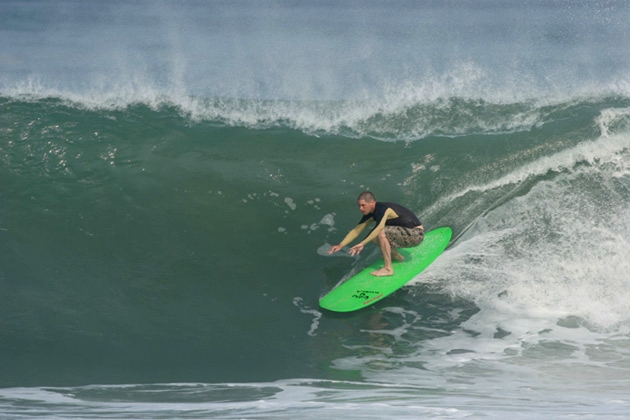 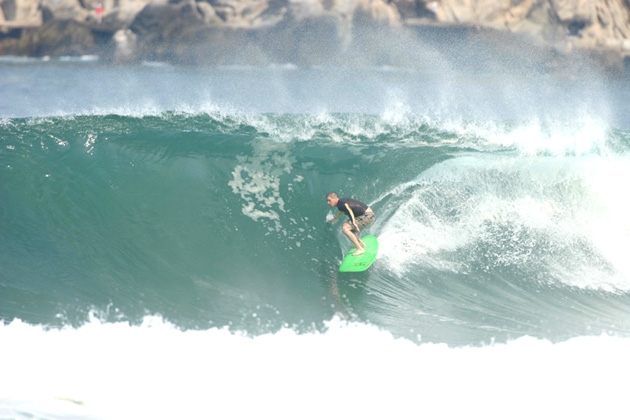