How did you all like that little summer swell? I mean come on. Waist to chest high for two days and the water temp was dam near tropical. Are you kidding me? Trust me, when it comes to staying warm, I'm the last guy you'll see trying to macho-ize a surf session. In short, I wear the correct amount of rubber year round. The last two days I was trunking it and never once felt cold. I was chilled here and there, but clearly, it was trunkable. I watched some people paddle by me with boots and gloves on. Huh? Did I miss something here? Dudes, boots and gloves?

I guess it's the signs of summer. You never know what you're going to see out in the water in the summer. Speaking of seeing things in the summer. The recent shark attacks in Florida has caused somewhat of a concern for all the beach goers. Someone asked me recently if there's sharks out in our water. To quote my buddy Jeff Chamberlain, "Stick your finger in the water and taste it, if it's salty, then there's sharks out there." Or to use my own line. "The only way to avoid being bitten by a shark, while surfing here in New England is, to surf with someone, who swims slightly slower than yourself."

I can't say that a shark attack in New England could never happen, I can say that it's highly unlikely. I can also say with conviction, that, there's a better chance of you being hurt, or killed by a loose surfboard in the shore break, or being hit by a car while crossing the Street at 10th St.

Forget about the sharks, they're the least of your problems.

Last night we went down the end of the street to watch the fireworks. The 4th of July display was in full swing and it was quite impressive. The sounds of the fourth on the main beach in the distance was apparent. Mixed in with the constant popping of small firecrackers and the booming fireworks was the unmistakable sounds of police and fire engine sirens. One can only guess what was happening down there. None of it, I'm sure, was any good.

America is 229 years old today. America is also at war today. We lost two brave Americans this week in the Global War on Terrorism with ties to the Seacoast . Navy Seal Dan Healy from Exeter, NH was Killed in Action in Afghanistan while attempting to rescue a team of US Navy Seals trapped on the ground and surrounded by Al Qeada and Taliban forces. The US ARMY Chinook helicopter he was riding in, was shot down by an enemy rocket killing all 16 on board. Also a local North Hampton man lost his son in Iraq the same day. 2nd Lt. Matthew Coutu was killed by an enemy sniper while he was assisting local Iraqi police investigating a vehicle that was on fire. His father Michael is a North Hampton resident and he himself is a veteran of the Vietnam war.

In another strange turn of fate. A Surfer friend of mine from California, Robert Gerard emailed me to tell me that one of his close friends, US NAVY SEAL Erik Kristensen was on the same Chopper that got shot down. Erik was a SURFER. He loved to Surf. He traveled the world Surfing, and now has paid the ultimate sacrifice for our freedom. On behalf of all of us, we want to extend our condolences to the families of these brave men.

This my friends, is the price of freedom.

Yesterday 1975 Jeff Obst bottom turns at the top Turn of Ocean Blvd. (Beaver Tail and all)
My friend Charlie Daley sent this pic in of our old friend, NH transplant Jeff Obst. Jeff grew up right at 10th Street. His late mother was so good at telling me over the phone how good the surf was. Especially seeing how she didn't surf. I guess I'd ask the right questions. Because when I drove down to the beach she was spot on correct. Jeff had his own unique style and we used to call him "Bert's after the famed Larry Bertleman from Hawaii. Jeff, if you're reading this, come back sometime and pay us all a visit. Hopefully there will be surf and we can get reacquainted.
Photo by Charley Daley 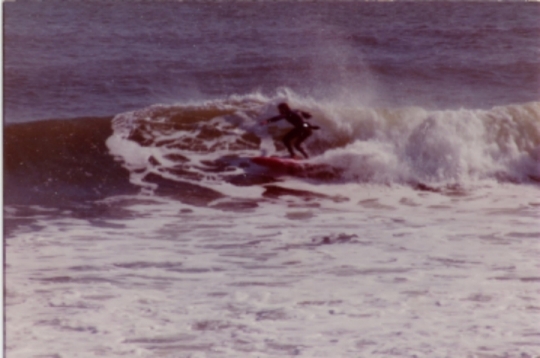 Here's an interesting bit of historical information for
those of you who are interested. Click here for TRUE story of what happened to the original men who
signed the Declaration of Independence.

Last week I asked if anyone knew who the dude with the Red Longboard standing on the rocks is and no one has come up with the answer. The photo is on the homepage. "Who Da Guy"? No one knows? Come on. Too late now...the image has changed.

Ok class it's time for the 3rd Summer Installment of:
"Ralph's Tip of the Week".
The last 2 weeks we talked about Holding On To
Your Board and Paddling Common Sense.
This week's tip is about DROPPING IN.
I can't believe I have to cover this, but it seems that some of you, STILL don't get it. If you're wondering why people have been yelling at you and screaming bloody murder, when all you were trying to do was catch the same wave they were riding, here's why.
IF YOU SEE SOMEONE ALREADY STANDING ON THEIR CRAFT AND COMING YOUR WAY. DO NOT ATTEMPT TO CATCH THE WAVE. Why? Because
It's AGAINST THE LAW. THE SURF LAW. It's the number One violation in Surfing. It is the single worse offense in surfing and has been the subject of many heated debates over the years. It has caused VIOLENCE at some breaks all over the world and NOTHING, I repeat NOTHING, pisses off a person more than this hideous OFFENSE. Now, I know, that some of you KNOW better. And quite frankly, I don't know which is worse. Having a beginner drop in on you, or having someone who knows better. I'd guess it's the latter. But for the sake of time and space, I won't go into the "You should KNOW better" rap for those who clearly should know better. Although, you OFFENDERS who obviously KNOW better are sending the wrong message to the beginner who watches you and thinks this is OK. Instead, I'll explain this to the beginner.

The rider who catches the wave further out and stands up first, has possession. Or, in the case where you are side by side with someone. The rider who is CLOSER to the breaking part of the wave has possession. If you see a wave coming do this simple step. Look left and right and make sure NO ONE is up and riding. If someone is and they are coming right at you. STOP paddling. Wait to see if there's another wave coming. It's really not that difficult. You will be a better person for it and who knows,
the rider may GIVE you the next wave.

You see, it's all about the sharing.

Next week's Tip will focus on How To Tell The Difference Between a Left and a Right. (oh yea).

Today 2005. Surf Training USCG Style
I was impressed with this image. That is ONE HEAVY wave. The Coasties are a brave bunch. They deal with it all. From rescuing boaters and ships to BLOWING away Terrorists when they get to close to our shores. God Bless them all.
Photo by The Phantom 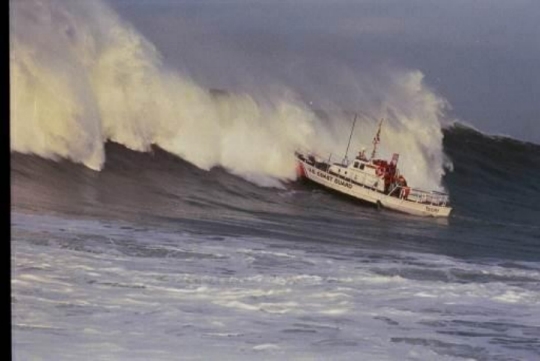 Today 2005. Cali Surf Craft
How do you get to the beach? This is how my buddy Jeff gets around. She may not look sporty, but trust me. This little boat gets to places the rest of us can only dream about.
Photo courtesy of Jeff Chamberlain 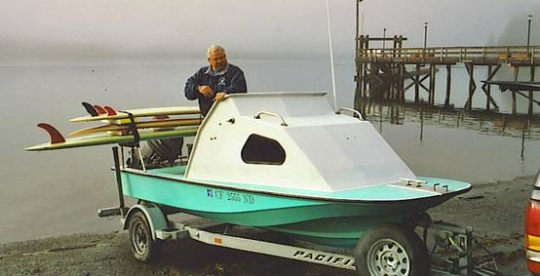 Today 2005. Cali Tube Time
Sent in by my Phantom buddie to remind me again, of just how good it gets out West.
Photo courtesy of The Phantom 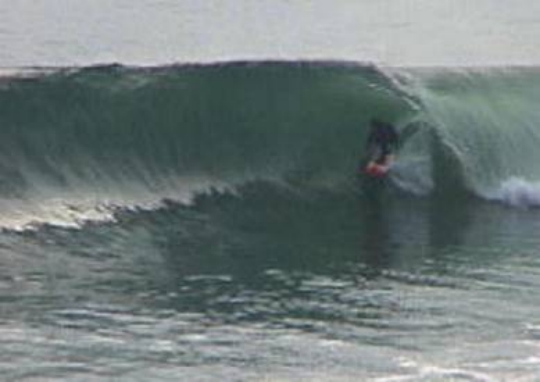 Today 2005. East Coast Stall...
Don't really know what's going on here. Looks like either the photo was snapped too late, or too early or, the rider is just standing there working out the kink in his back. From a couple of weeks ago.
Photo courtesy of Brennan Natoli 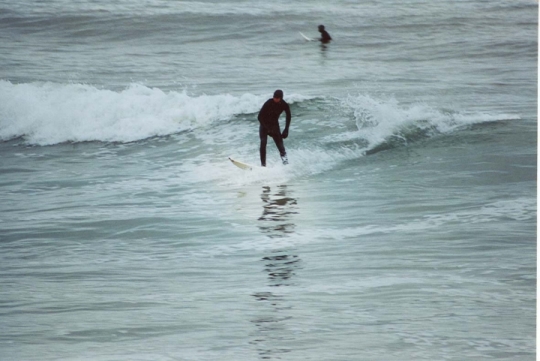