January 5th, 2005
155,000...One Hundred and Fifty Five Thousand lives lost in last week's deadly Tsunami. Over 5 million people are misplaced. These numbers are staggering. The reports are still coming in about Surfers being swept away while out surfing at some of these remote surf destinations. Like a lot of you, I am completely blown away by the scope of it alI. I do want to take the time to thank those who emailed me this past week and those who I spoke with on the phone and in person. Clearly, this tragedy has touched us all. I've heard that many of you have already sent in contributions. That's good. We (my family) sent money to the Red Cross on Day 3. For those of you who are concerned about getting scammed, there are many legitimate organizations that are helping with the relief effort. We all need to do something. Those people need our help.

We need to help our fellow human beings. I hope that none of you have lost any friends or relatives. It's still hard to accept that a Wave did this. Or rather, a series of waves, caused by a powerful earthquake. I listened to one fisherman say "I'll never return to the sea, it is too frightening". And really, who could blame him?

There are good stories too. I heard just today that a man was found alive 100 miles off the coast clinging to a tree after 7 days. There were others as well. Families being reunited after being separated when the tsunmai first hit. Truly amazing. It is a wonder at what the human body and spirit can endure when faced with a life or death situation.

Talking with Dave Cropper this week, we talked about the dangerous attraction that a lot of us have with the ocean. "We flirt with danger all the time. When ever we enter the water and the surf is big". John Meehan echoed those same thoughts. "After surfing big waves we all feel that exhilartion of having cheated death and that makes it special because not many people do this."

We are a unique group of individuals. Surfers. Surely, many of the islanders, who live in these remote surf locales, must think that Surfers are a tad crazy. They watch from the safety of their crafts,. or on the shore. In wonder and amazement. Some no doubt, end up joining us in our quest. Phil Carey brought up an interesting scenario. That is..."How do you travel to these countries now and ask where the big waves are? They will look at you like you're speaking of the devil." This Tsunmai has changed the make-up of surfing in these areas for many years to come. And the sad thing is, there's no telling how long.

To reiterate what I said last week.

This will be, the single biggest loss of life, suffered by SURFERS and... the biggest blow to surfing, in general.

Same day as above...only different spot
Look closely.The outside wave. About 20 yards in from the pitching lip. In front of the white water. Yes, those are people paddling out...right smack into the impact zone. photo courtesy of Dave Sautter 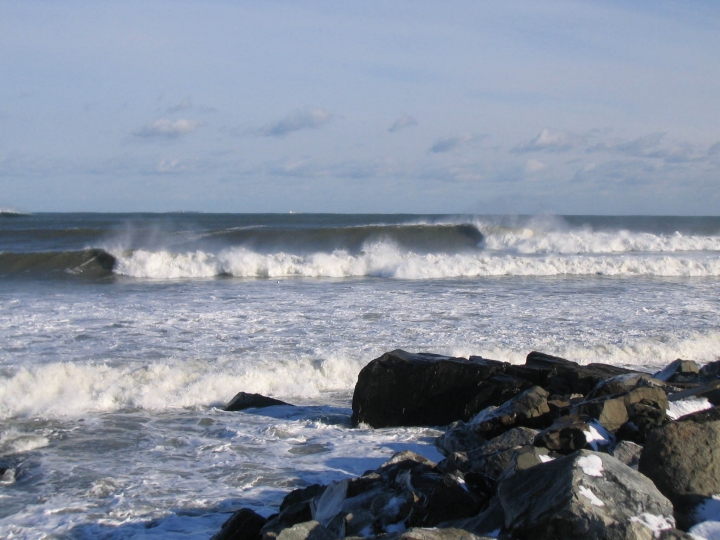 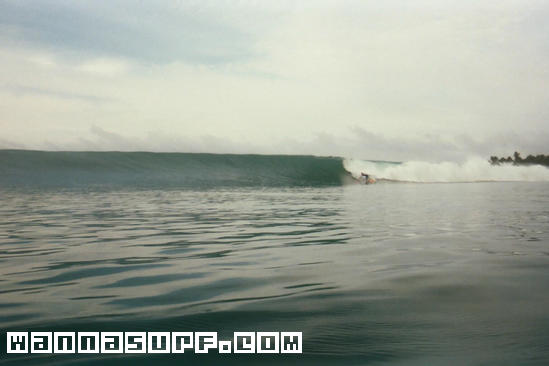 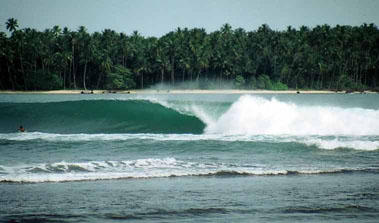 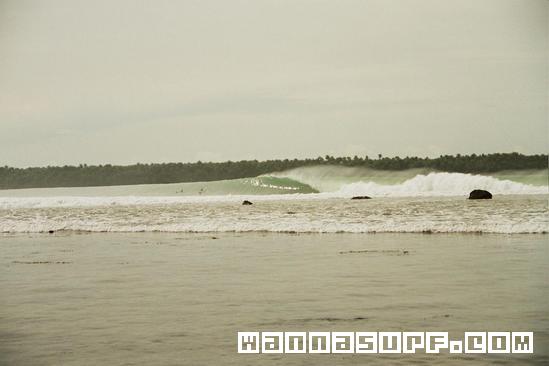 Yesterday 2001. Nias. Gone, But Not forgotten.
I heard that this spot is now History. The whole village has been wiped out. This wave has always captured my imagination. There's something about it. It's perfect for sure, and hollow too. But, there's always been something mysterious about Nias to me. Now, I'll never look at it again without thinking about what happened there.
Photos courtesy of wannasurf.com

Ok... I've received some photos from last week's swell. Monday, December 27th, 2004. They are impressive in more ways than one. The obvious parrallel to the Tsunami news is evident, but more importantly, the separation, from the scenes of death and destruction, to our cold, beautiful world. And of course, the surf.

It was big that day. If you saw the wave cam that morning you knew. The tops of the waves were blowing back to France. There was size and it was significant. Remarkably, there were very few people out. It was cold for sure and the wind was clearly a factor.

Maybe, the tsunami had an adverse affect on more of you than I originally thought. I know how I felt. I know the vibe that day was weird. A lot of things didn't feel right.

Speaking of surfing and fun. The Goulds and Grondins have returned from their Puerto Rico trip. The reports are, they got good to great surf, but the crowds were a bit thick at some spots. Still, how bad can surfing in tropical waters be, when we're all stuffing ourselves into 6mil suits and swallowing 40 degree salt water? I'd say..."what crowds?"


The Patriots are sitting back this weekend and taking it easy. They went 14-2 this season matching what they did last year. Only last year, they didn't have Mr Dillon. Corey Dillon rushed for 1,600 yards this regular season. You have to think that he's excited to be with a team like the Patriots. He's been fun to watch. I can't wait to see what he'll do in the Post season. You have to think he'll do good.
It will be nice as a fan to watch Football without wondering if we're going to win or not. The Bye week. Sounds good to me. And, if Crop is right...the road to the Super Bowl passes through New England.

Happy New Year to you all!

P.S. Pray for the victims and their families. God Bless.

Click On Wave to Go Back to The Top.
Today 2004. Monday Dec 27, 2004. Kevin Rafferty just back from the pre-Tsunami Surf Trip.
Kevin Rafferty riding waves in New Hampshire, but his thoughts are clearly a half a world away in Indo.
Photos courtesy of Jamie Wade 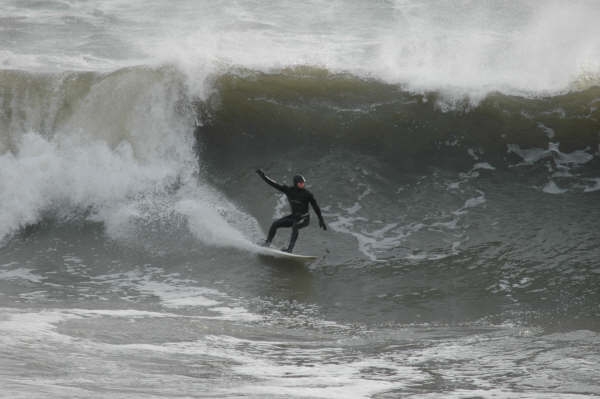 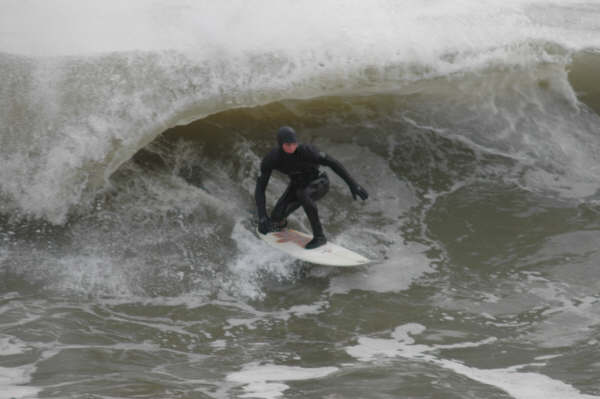 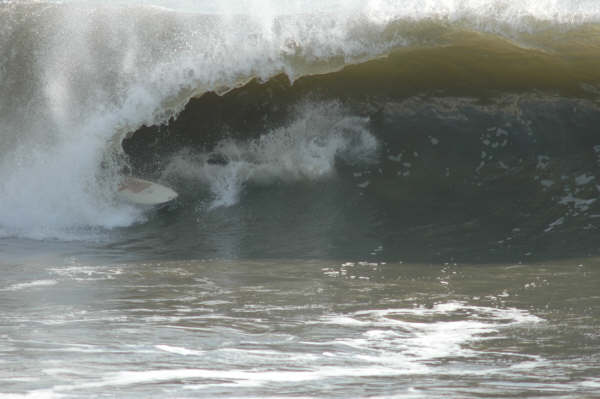 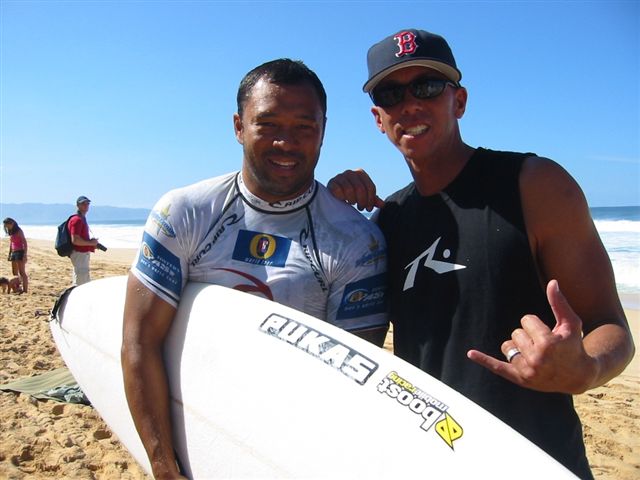 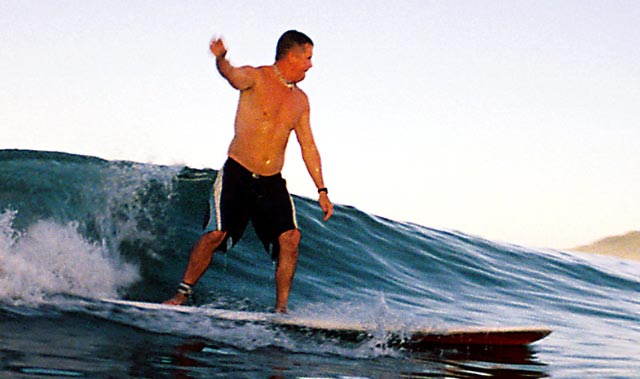