February 28th, 2005
Tell me another Monday storm coupled with yet another swell isn't coming? Are you kidding me? Of course, this means more snow.
And I I think we're gonna get slapped hard with this bad puppy. But think of the waves associated with this Monday mess. Can you handle more surf? Sure you can. What should we call this swell? How about The Oscar Swell?

Last week I asked the Surf community how many US Presidents may have tried Surfing. Thanks to an email from Jeremy (another history buff), he says that NIXON did infact try surfing! More than likely in the 40's. According to Jeremy's sources, Nixon's kids even bought him a board. Richard Nixon owned a surfboard! Jacko even said that he thinks JFK may have tried surfing on the Cape. So I guess I was pretty close last week when I picked those two out of the whole presidential batch as to which US Presidents may have tried surfing.
Now we know the Rest Of the Story.

I noticed something last week that I'm sure a lot of you see too. The Wave Cam's creative eye. Every now and then that Wave Cam captures a wave at the most critical moment. You know what I'm talking about. Several times last week I looked up to see a perfect hollow wave on my monitor. Then 10 seconds later, it was gone. It's like the mind's eye. I was impressed with the timing last week of the wave cam. Now, I know the dam thing has no way of knowing when to snap that image, but for some reason last week, the cam was getting some decent shots. Then as fast as we'd see 'em, the thing throws em away. Just like the human brain.

Paul is there any way to save some of those images? We could have the Best of The Wall Cam Gallery.

Yesterday 1968. The Late Peter Hilton Cutting Back intoThe Hands of Time.
This photograph of my old friend Peter Hilton is a bittersweet memory for those who knew him. Peter was a member of our old Surf gang back on the North Shore (Mass) during the 60's and throughout the 70's. He gave up on Surfing in the 80's and hung around with a different crowd. For years we tried to get him to come back to Surfing. For whatever reason, he wouldn't.
After a night of heavy drinking with his new friends Peter was involved in a solo car crash. He lived throughout the night in that Emergency room, but passed away the next morning. There was a new swell on the rise when we all heard the news. Peter was a good surfer and a talented shaper and glasser during his time. We all still miss him. He was a good friend.
photo courtesy of Jeff Crawford 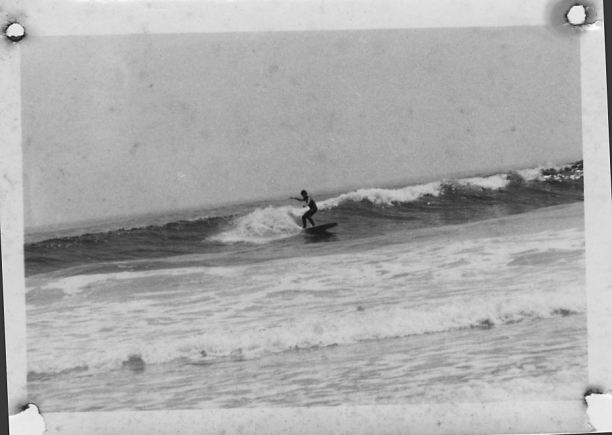 All the kids were on Vacation last week. I mean all of them. Massachusetts and New Hampshire. Those of you that missed the travel boat or plane, were treated to a few nice days of waves. I surfed three days last week with Max. It was almost like we were on some kind of a Surf Trip, except for the unbearable cold. Man it was cold on Wednesday. Max kept pointing out the obvious. "Dad can you imagine if these waves were in a tropical setting? Just think of how crowded it would be!" I didn't have to answer him. He already knew
my answer.

Mike and Dale Keefe are off to the tropics this week. Back to Costa Rica. This is Mike's 4th or 5th consecutive CR trip. What are ya trying to tell us Mike? Is there good surf there? Or is the New Hampshire weather getting to you? I'd say both.

Good Luck to TY LAW. We're gonna miss you. 10 years is a long time. The Patriots won't be the same without you. Just don't end up on a team we have to play please. Lenny was laughing at the possibilities of Ty Law heading to Miami...could be worse...he could go to the dreaded... JETS! Please God don't let that happen.

Did I see that Antwoin Walker is back on the Celtics? Is that legal?

Wax those boards kids...we're getting another Macker Swell!


Click On Wave to Go Back to The Top.
Today 2005. Last Week In Southern Cal and at Pipe.
You think we're the only one's experiencing Big Swells this winter? Think again. These came over on the hotline last week.
Photos courtesy of The Phantom 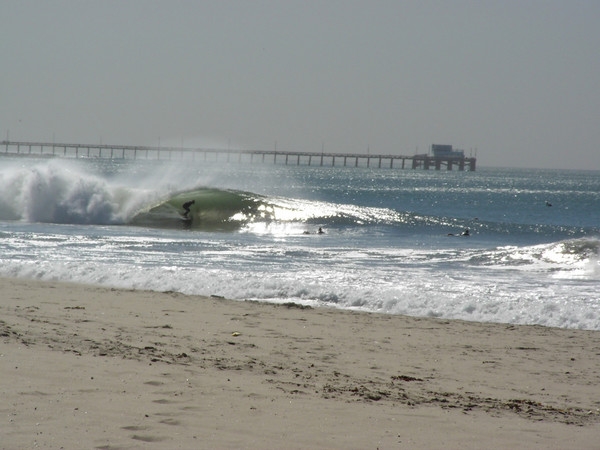 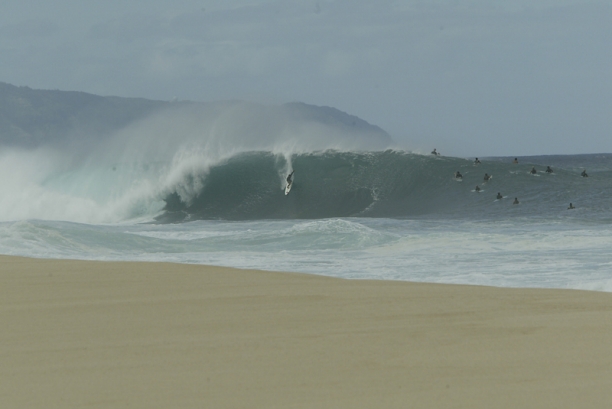 Today 2005. Last Week In New Hampshire.
First shot is Mr. Jacko Keefe at a Not So Secret Spot. It's a Left with a decent Right...for some people.
Photo by Jamie Wade 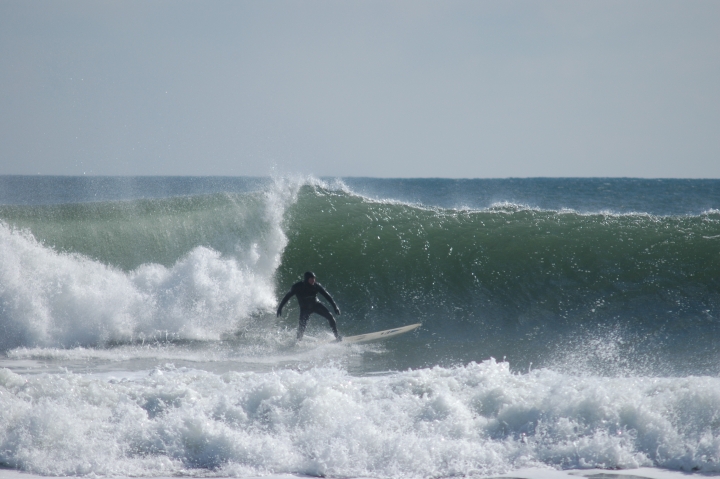 Same Day in New Hampshire, Cept, Different Spot, Different Surfers and Different Photographer
Or as I'd like to call this...a Tale Of TWO MIKES.
This is Mike Moran and Mike Stanek at a Spot Called Parking Meters. Looky how Hollow she gets!
*Keep in mind all 5 photos above were shot last week.
Photos by Johnny Grasso 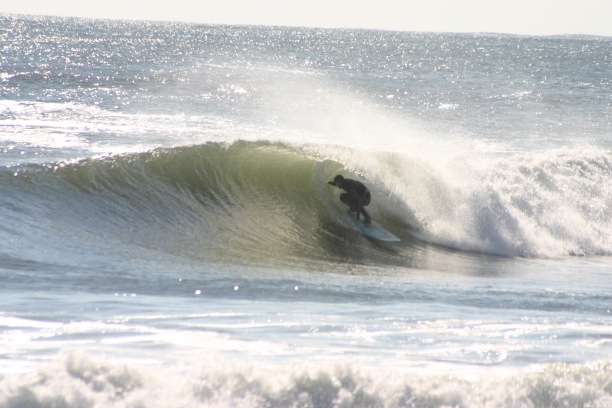 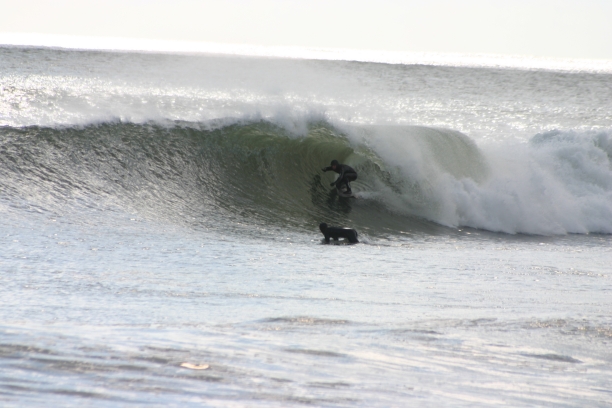 Today 2005. I'll meet you at the "V" in the Vortex.
Last week I asked John Carden to send me a surf photo. This is what he sent me. Good job Whoop.
This particular New Hampshire spot Rhymes with Havana or Banana. But not Canada.
Photo by John Carden 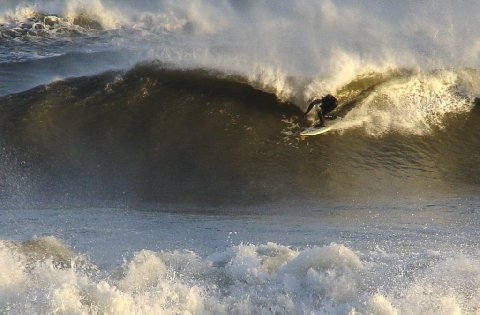 Today 2005. The French Connection.
This photograph taken last August of Alex Schimel was sent to me today from France. Alex is a Frenchman who went to school at UNH this last year. He bought a board from Cinnamon Rainbows and surfed our waves while he was here. Little did Alex know, that his hat would play a major role on the die hard Red Sox fans in New Hampshire a few months after this photo was taken. Alex tells me that the most popluar surf magazine in France (SURF SESSION) had a 10 page story on New Hampshire. We'd like to get a copy if possible Alex. Send us one if you think of it.
photo courtesy of Alex Schimel 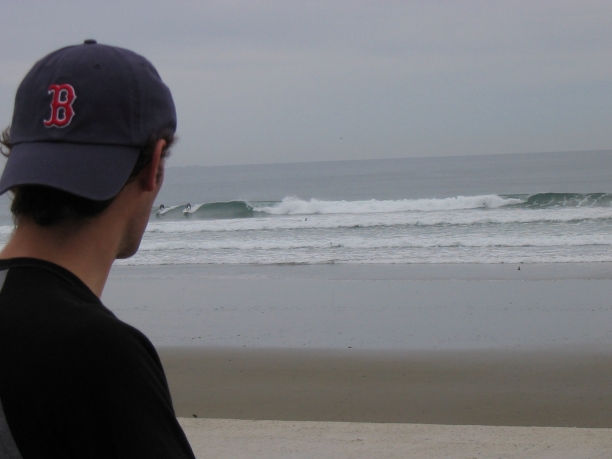