December 18th, 2005
I made three observations this week that I wanted to share with you guys. The First one happened on Wednesday, December 14th. It was the opening night for the movie KING KONG. Being a semi Movie Buff I had to see it. I loved the first one. You know, the old B&W made in 1933 that starred Faye Wray. A classic for sure. This time I forced (yes I said forced) my whole family to join me. It was great. The NEW KING KONG is really good. If you like that kind of genre. I do. My family dug it too. Lots of really amazing special effects combined with a decent storyline made for an enjoyable viewing feast. The director Peter Jackson (LORD OF THE RINGS) kept it close to the original screen play. Like I said...the SFX were wild.

However, my observation happened about a third of the way through the film. Apparently, they shot the SKULL ISLAND footage on New Zealand. There's a scene where KONG's love interest (Naiomi Watts), is standing next to the Big Guy as he sits in front of his cave atop some high mountain and gazes out over the ocean and reflects upon the beautiful sunset. What caught my eye was; in the background, there was a beautiful, perfectly, groomed set pouring onto the reefs below. Suddenly my mind was thinking about the surf out there and not the scene. I leaned over to Max and motioned to him. "Check that set out!" I whispered. My youngest daughter sh-s-s-ed me.

But it was too late, the surfer in me had seen something and my mind was wandering. I wondered if there were any surfers working on the set, and if they got to surf that swell. Because, there was no need for Special Effects there. That swell was big and clean. And REAL.

Go see the movie. It's good and worth the money. And tell me that swell wasn't going off!

My second observation happened on Friday December 16th. I was supposed to play my guitar with some good friends at a private party when about an hour before the gig I suddenly became ill. Now I don't mean just a headache, or sneezing, or an upset stomach. I mean I was hit by a freight train. The dizzy spells (the room started spinning) and the nauseous was overwhelming. I couldn't stand up for hours. Anyone who knows me, will tell you that I really enjoy playing my guitar. I've been playing for sometime and I look forward to any chance where I can cut loose. Not this night. Which got me thinking again.

What if I was in some third world country and miles from any doctor or hospital? It did happen to me once. In the Caribbean (a long time ago). I became violently ill and had to find my way to some third world hospital. I ended up in some Quonset hut in the jungle. It was pretty sketchy there for a while. By the time I got out of there I had lost some 15lbs. Then the surf came up (but that's another story). So what's my point? My point is...some of you will no doubt be traveling this winter, and I know, some of you will be heading to places, that don't really have the proper facilities, if you need them. In other words, you're on your own. So what to do?

Get all your shots and medical history in order before you leave. There's nothing worse than being sick out of your mind when the surf is going off. The very least you should do is to make sure you have a first aid kit. And any kind of over the counter pills you can take to fight off a stomach virus, or a simple headache will help.

I'm telling you all this because, if I was too sick to play my guitar on Friday...I was clearly way too sick to Surf.

And that's the ultimate bummer for any surf trip.

Yesterday 1975 December Wall...One Guy Out!
I had to beg my friend Jeff "Berts" Obst to paddle out this day. I wanted to finish up a roll on my cheap Kodak instamatic. Jeff had a Yellow wetsuit! Yikes. He was such a good surfer and his ability to pull into the barrel on the clean days is still fresh in my mind. Thanks Jeff for going out this day. See I told you it was worth it!
Photo by R. Fatello 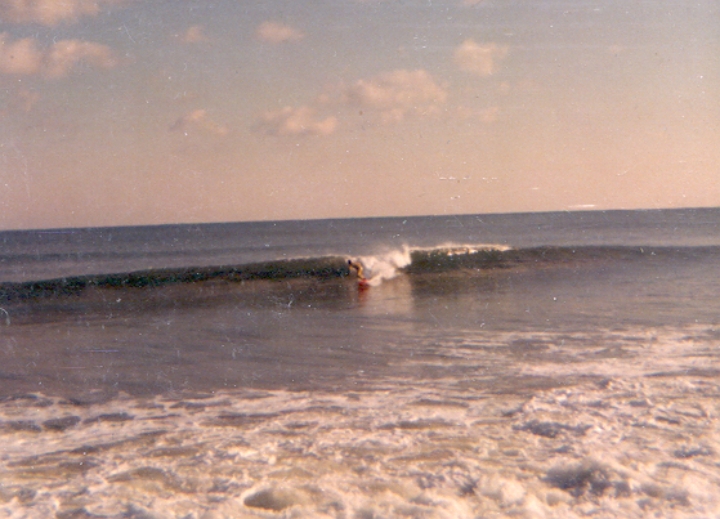 My third observation occurred yesterday when I was too weak to surf. I decided to shoot some of the action at the Wall. I watched as Max and the boys shared a bunch of waves at 10th street. When I noticed that there seemed to be more surfers than I have recalled in the past surfing in the Winter. Don't get me wrong here. I'm not complaining (maybe I am, and just don't realize it). It's just that there were so many different types of surfers heading into the water and out. I might not have noticed had I been out there with them. But standing there under the Wall I was able to see it all unfold in front of me. There were young rippers, young longboarders, men and women, old short boarders and old long boarders. The one common thread that each one of them had was...they all had decent wetsuits.

And that's the secret to WINTER surfing. Now I realize that this is not some major revelation and I am not telling you anything you don't already know. But for me, and many of my older friends who live this lifestyle, it's the one thing that we didn't have in the old days. We never had good WINTER suits. We suffered. And that's why there were less crowds in those days. Who the hell wants to paddle out in cold water and have your dam suit leak? Anyone? Just a handful of us did.
Watching the dozens of surfers paddle out on Saturday morning made me realize just how far we have come.
I just don't want this thing of ours to become to accessible to the masses. Do you?

The jury is still out on the CLARK FOAM Closing. My guess is, it will be bad for quite sometime before it gets better. Maybe it's time to try a Wooden board or an Epoxy? Hang in there everyone. It will work itself out. The demand for a decent blank is too great. Someone will step up and produce a good blank. Be patient.

Well the Patriots have finally awoken. The rest of the NFL better pay attention. They clinched the division yesterday against a good Tampa bay team and now have their sights set on the Post season (after the last two remaining games). It's all Pretty exciting (again).

The SurfFreeOrDie Winter Surf movie WINTER 05
is in the Shops and it's also on the Shopping Cart on the Cinnamon Rainbows Online Shopping. Thanks Paulie! WINTER 05 was shot ENTIRELY in New Hampshire from December 1st 2004-Thru March 31st 2005. It features all New England Surfers with some of the BIGGEST Surf ever photographed in New England.

SUMMER 05 release date has been delayed (due to the success of WINTER 05 but we're trying to get it in the shops soon! SUMMER 05 was shot in New England and Cape Hatteras from June 1st thru September 30th 2005. SUMMER 05 features New England Surfers/East Coast Surfers surfing some GREAT Summer Waves.

Hey! I thought I'd lay this on you all. The last week of the year I wanted to do the BEST PIC of the WEEK for 2005. How do we do that? Simple bunky. Go back into the archives and pick your favorite Picture from 2005 and send me an email with what photo you picked. DON'T SEND ME THE ACTUAL PHOTO just a description of which one. Sound like fun? Or a pain in the butt? Come on kids. Go back and find the one photo that you think deserves the title... PIC OF THE YEAR! The pic with the most votes gets both the Photographer a FREE DVD and if there's a rider in the pic he/she gets a FREE DVD too! You can only vote for one pic. Start checking the archives out and cast your vote!

Congrats to my friends Phil and Marie Beauchesne on the birth of the new Surfer Girl Isabella. Mom and baby are doing fine.

Today 2005 THE WALL December 16th, 2005 (Yesterday) With 100 Guys Out!
What a difference 30 years makes...not to mention the New Winter suits. Boy are you guys lucky. Kevin Rafferty setting up for the lip smack or the glide...? H-m-m-mmm what do you think?
Video Frame Grab SFOD R.G. Fatello 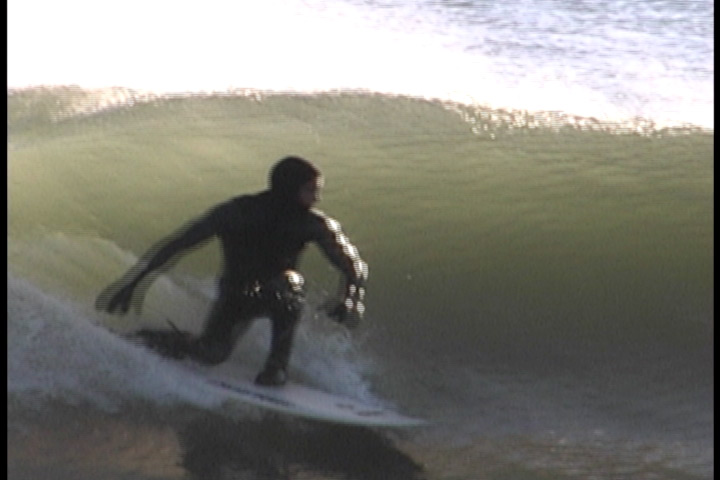 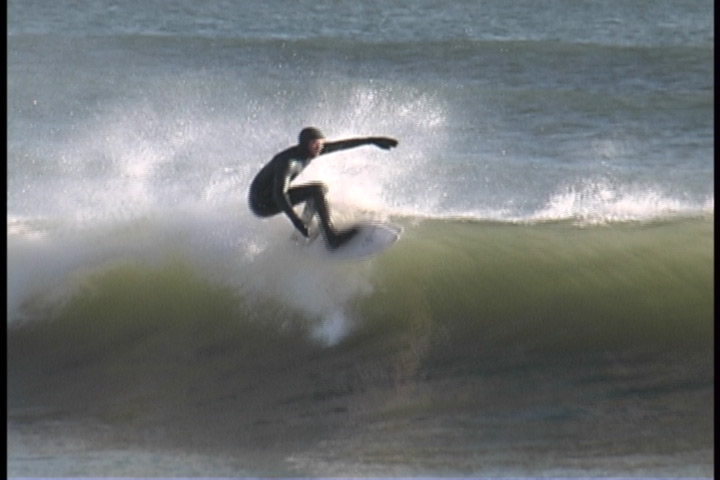 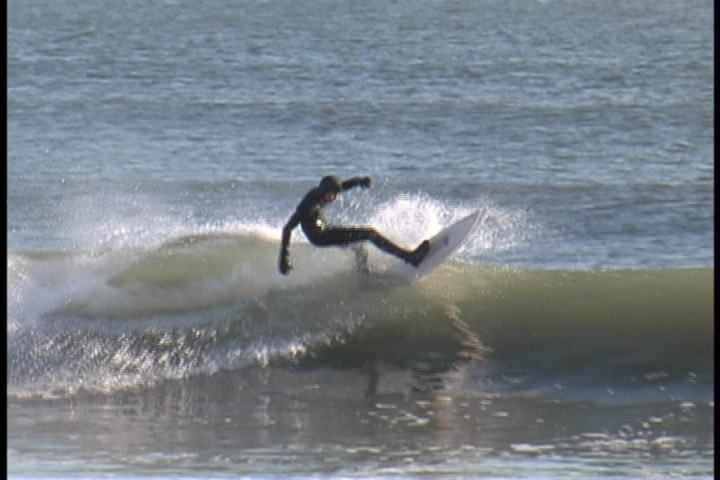 Looks nice...and lonely and quite frankly, you can't tell how cold this really is. CLICK ON PHOTO BELOW FOR MORE OF NICK'S SHOTS FROM SATURDAY.
Photo by Nick Lavecchia

This Peak has a nice mini A-Frame ...lucky dog! (CLICK ON PHOTO FOR MORE OF SKYE'S SHOTS FROM YESTERDAY Saturday Dec., 16, 2005.)
Photo by Skye Nacel 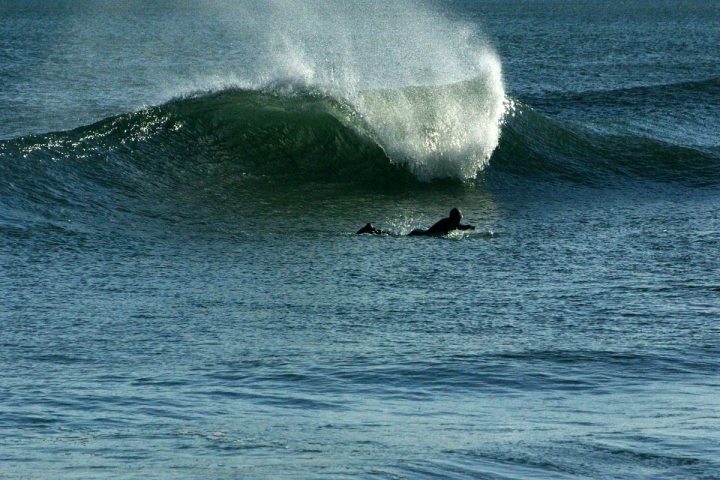 One from a few weeks ago...this is a beautiful photo of our coastline. Looks cold but it sure looks good.
Photo of Sean Sullivan and empty waves by Kathleen Sullivan 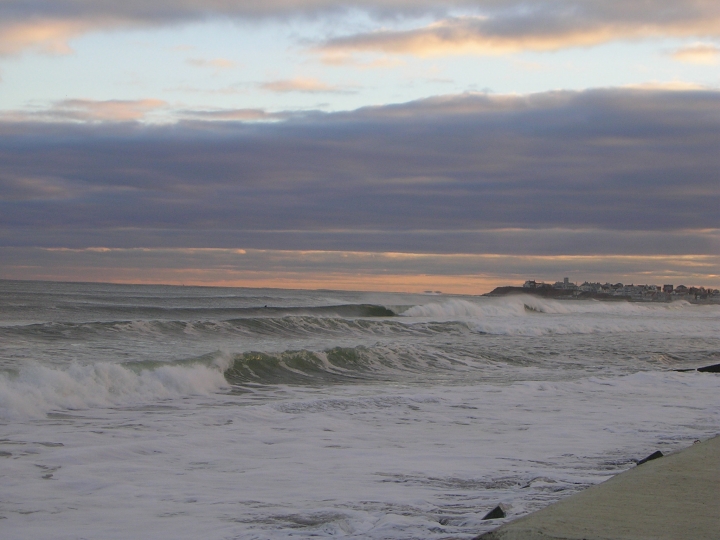 Today 2005 EASTY GOES WESTY
Hampton Transplant Kyle Howard showing us all why the move to California was kind of neat...
Photos courtesy of Cory (Kyle's brother) 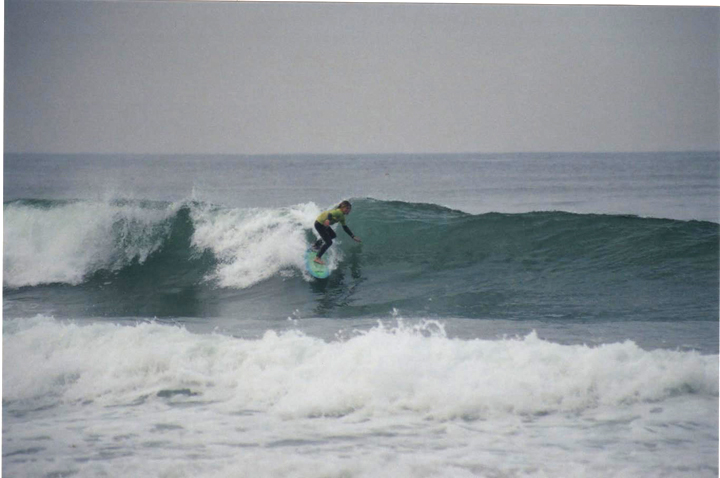 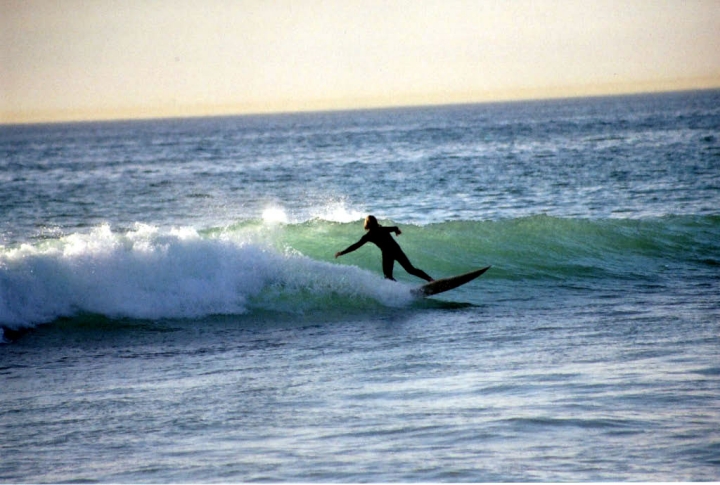 Today 2005 MORE Madness from the Westie Coast
My buddy Rock sent these of his favorite beach break. Are you kidding me? Beach break? I don't think so Rocky.
Homey don't play that game. Photos courtesy of Rocky V 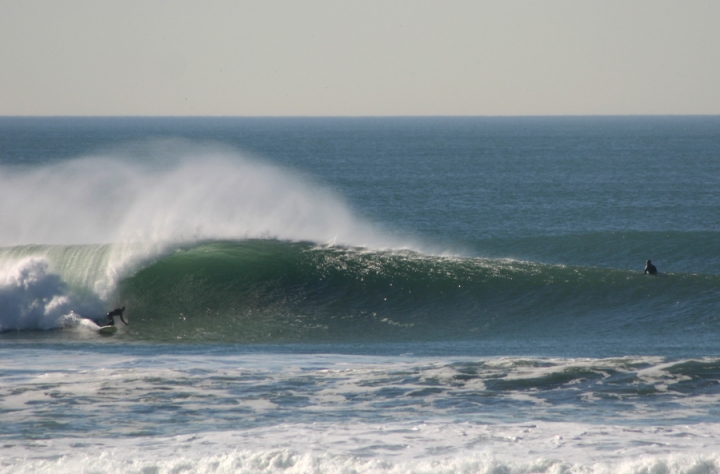 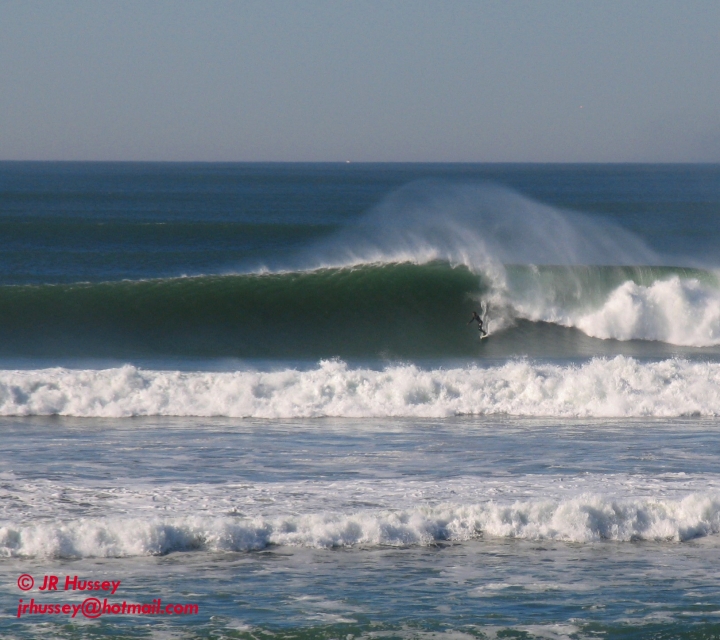 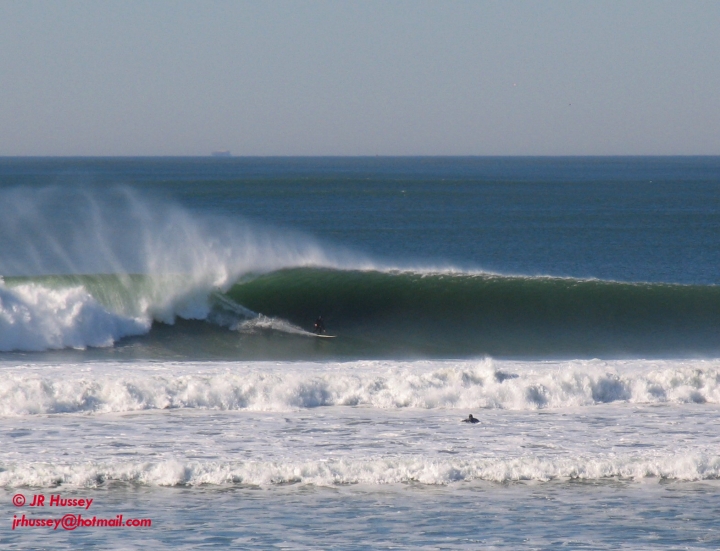 Today 2005 While My Guitar Gently Weeps
My buddies in KINGS HIGHWAY let me jam with them last Summer. Here we are playing Voodoo Chile by Jimi Hendrix
Video Frame Grabs by SFOD from the Movie SUMMER-05 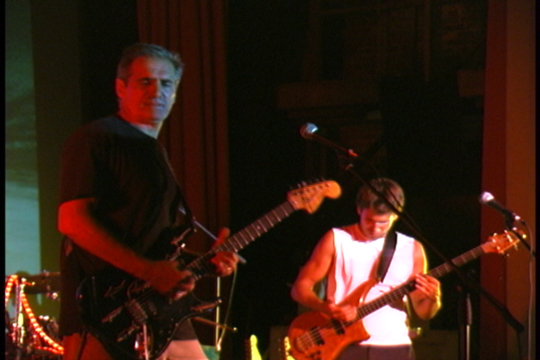 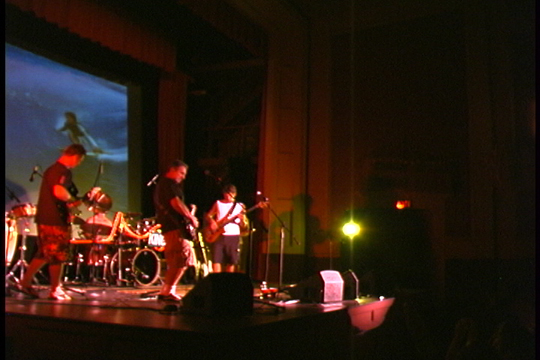 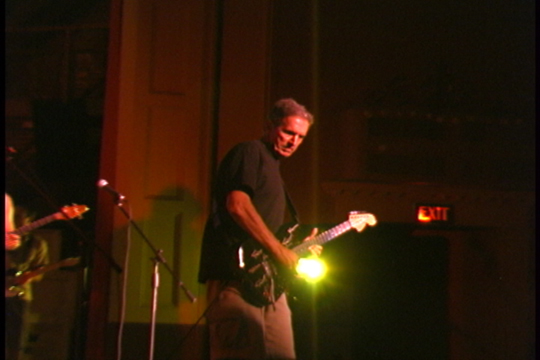 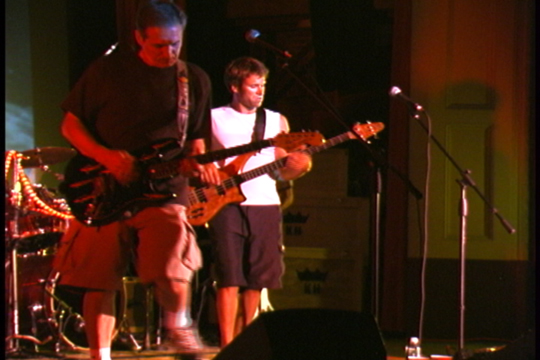 Today 2005 PARTING SHOT- The Future of Surfboard Blanks
Think this is funny? It might end up like this.
. Photo courtesy of The Phantom 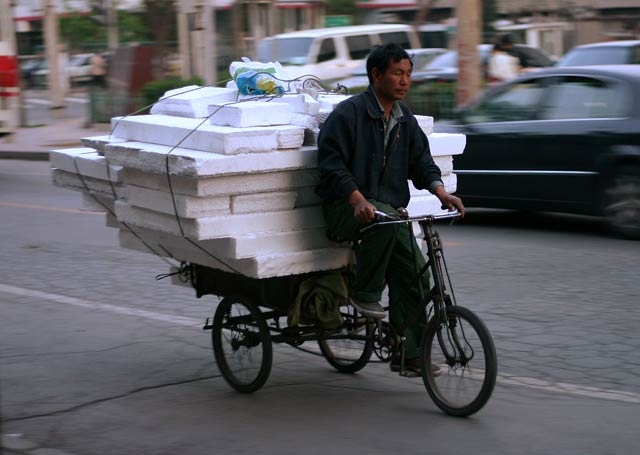