Last Sunday in the early evening, right around 5:00PM, I had just finished writing my weekly column, when I decided to join my son Max and some friends at one of the local point breaks. It was warm enough to wear my 4/3. The surf was overhead and seemed to be building. The wind had died down and it was glassing off nicely. We surfed until dark and had some of the best waves of the Spring. Just 4 of us out. There were a couple of new guys out surfing who I had never seen before. One guy in particular, had just moved here from Hawaii. I think he said his name was either Paul or Pat...can't quite remember which. I do know that he was very friendly. And, he was a good surfer. I sparked up a conversation with him. I told him I had been to Hawaii many times and that I loved all the islands. He shook his head. I asked him the obvious question. "Why would you leave Hawaii for this?" He explained that his wife was from Massachusetts and she missed home so much that it was just too much for him to bear. So, he packed up his whole life and moved out here so his wife could be near her family. He was surprised to find surf here. In fact, he was beyond surprised. He didn't seem to mind the wetsuit, or the cold. He asked me if this was a typical swell. I had to answer truthfully. "Yes and no. It can get better than this and....it can get a whole lot worse." I don't think he heard the last part. Because he took off on another wave and just ripped it apart from start to finish. Big ole smile on his face, the whole wave.

I remember thinking that he must think that all of New England has great surf and friendly surfers. We all know that's not true. It's especially not true in his native Hawaii. There are some heavy vibes, heavy locals and REAL heavy waves in Hawaii. Don't get me wrong. There is still plenty of Aloha in Hawaii. Which got me thinking again. Wouldn't it be nice if every spot was friendly?. So when you traveled to some foreign country, or even here in the States, you encountered smiles instead of stink eyes. Is that wishful thinking on my part? Maybe. But, I do know one thing. This new Hawaiian transplant I met had himself a good solid surf session and just maybe, his sacrifice for his wife is less painful today because of it.

Speaking of good vibes and surf trips. Dave and Phil have returned from Fiji with some great stories about some killer surf and great times. They hung out with some hard chargers in some of the heaviest surf they've ever encountered. Listening to Phil talk about 15' Cloudbreak had my stomach in knots. I could just imagine the pressure of having to perform in front of these Big Wave Rider Pros. Let's face it. We're all good surfers in our own minds. But when you see the real deal waves and the pros who really ride them, well, reality sets in. And you can either do one of two things. You don't surf. Or, you push yourself into the fray. You go for it. Against all of your better judgment. You paddle out into conditions that you know you shouldn't and you take off on waves that you have no business trying for. Of course only two things can happen. Both of them bad. You either die paddling out or you die taking off.

Seriously though, Phil and Dave handled themselves with confidence and they represented our beloved New England with pride and distinction. Even if they were both, just a little bit freaked out, on some of the bigger days.

Yesterday 1977. A Dream Wave, somewhere in Massachusetts
I remember this day. I was out surfing with just one other guy. My buddy Jeff was up on the rocks clamoring around trying to get the best angle on this fickle spot. I was riding an old yellow single fin Robert August 7' 8". We all thought we were Gerry Lopez in those days. The more casual you stood in the pit the better you looked. Or so we thought. Jeff had been trying to get me to surf here for the longest time. I was too busy surfing my own fickle breaks in those days. As you can see, this wave is pretty dam good. Of course, I played like it was just "OK". What is wrong with surfers? I mean it's always bigger where you are, always cleaner, always less crowded. I wish I could go back in time. I'd change some things for sure. I think we all would. We'd all be better human beings for starters. I guess that's why we have children. So we can teach them the errors of our ways and make sure they don't make the same mistakes we did. Thanks for the memories Jeff.
Photo courtesy of Jeff Crawford 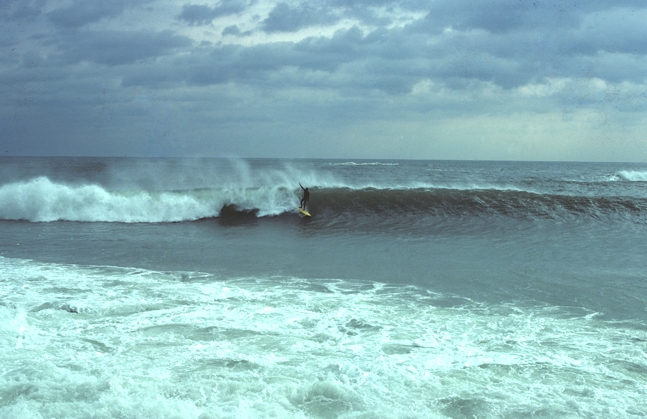 Monday was Patriots Day. And we had some great waves all day long. I bet if you asked half of the Surfers who surfed that day what the meaning of Patriots Day was, you'd get a handful of different answers. Most of them would undoubtedly be wrong. No it's not the day to celebrate the New England Patriots (although that's not a bad idea). It is the day we commemorate the Battles of Lexington and Concord in Massachusetts in the year 1775. Exactly 230 years ago. It was the start of the American Revolution.

We've come a long way since the days of British rule and powdered wigs. Paul Revere today would of used email to warn of the approaching British.

Of course nowadays, we celebrate Patriots Day by the running of the Boston Marathon. Now, I don't want to draw parallels here, but a few of us pulled some ' Marathon ' surf sessions on Monday. I for one, surfed 4 hours. Others surfed longer. Some spent the entire day in their wetsuits. That's got to stink.


Writing this column today, I am aware of yet another swell. This one is not as strong as last week's, however, it is yet another swell in a series of never ending swells. And one can only hope and pray that this weekly gift of waves continues right through the summer. Because my friends, that's when we'll all really need it.

The summer. It's coming. With all the good and the bad it brings. A weekly swell could make the summer more bearable. The experts are predicting a active Hurricane season. We'll see.

Ok we have finalized a solid date and time for the Memorial Paddle for Ray Hackett. It is Sunday May 15, 2005 at 5:00PM at Rye Rocks. I f you're wondering whether or not you should attend, the answer is yes. If you surf, you should attend. If you love the ocean and love watching surfing, you should attend. If you surf, you should bring your board and wetsuit. If you've never attended a Surfer's Paddle it is quite impressive. It is both uplifting and positive and it will help in the closure process. Ray was one of us. Let us honor him in a fitting Surfer's Send Off. Click on this link for more info.

Surf should be fun tomorrow (Monday). It should be warm enough for most of you to pull out the 4/3's. The Kids are on Vacation so expect the line-ups to be a bit more congested. Be patient. Waves are like buses, there's always another one coming.

Please Pass the word on the Ray Hackett Memorial Paddle.

Click On Wave to Go Back to The Top.
Today 2005. Last Monday, Patriots Day. The Cutback 'Heard Round The World.'
Don't know if Mike "Zap" Paugh is one of those who knows the significance of this day in our nation's history. He more than likely is concentrating on making the next section than he is thinking about the American Revolution.
Photo by Alex Orestis 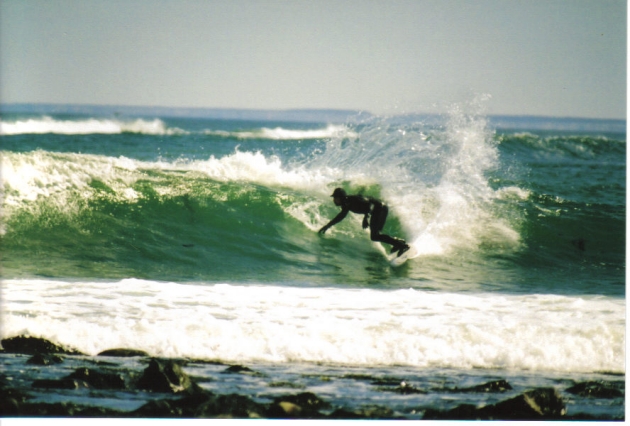 Today 2005. Can You Guess Where? Hint. It's on the East Coast.
Riding a wave this big is not common in Florida. Yet, this wave was shot in Florida on Patriots Day Monday. It looks like a a Big Mushy Mavericks. My buddy has been telling me how good Florida gets. This looks interesting to say the least. Perfect? Hardly. Warm? Definitely. Count me in.
Photo courtesy of Phil Beauchesne 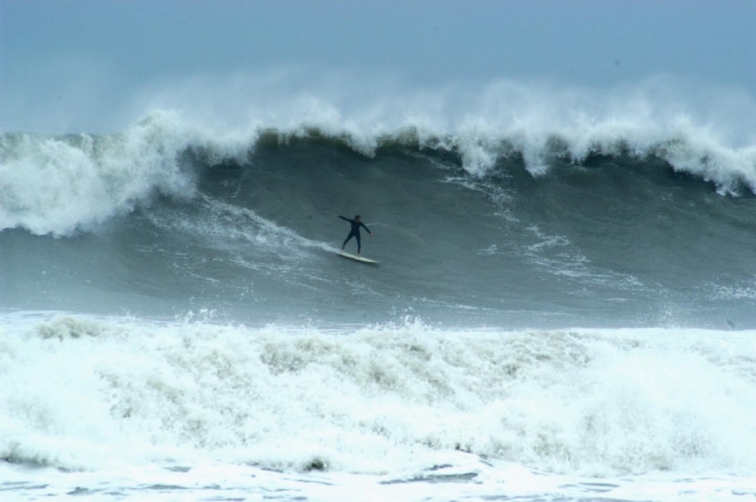 Today 2005. Dave and Phil's Fiji Adventure
The local shop gurus made their annual surf trip to Fiji last week. These are some of the images they brought back. Looks like they had fun. Great waves. Good friends. What else can you ask for on a surf trip.
Photos courtesy Dave Cropper 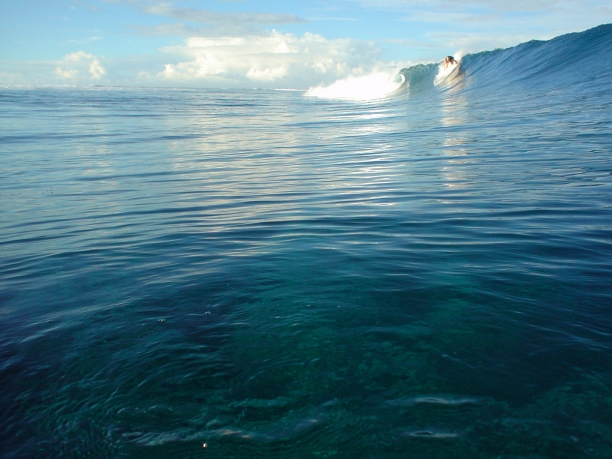 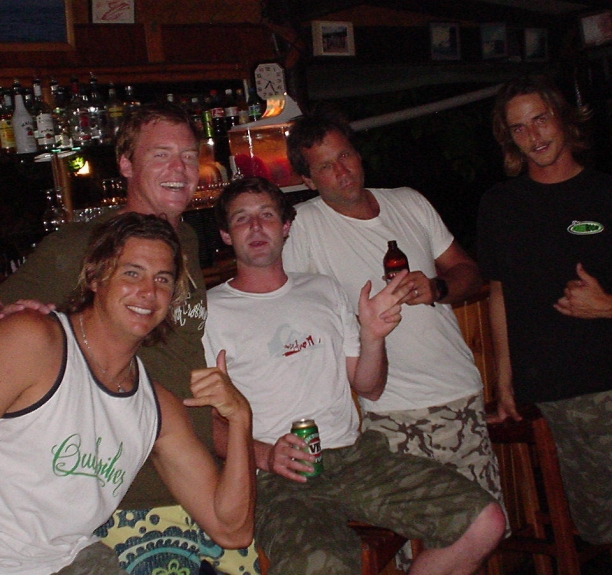 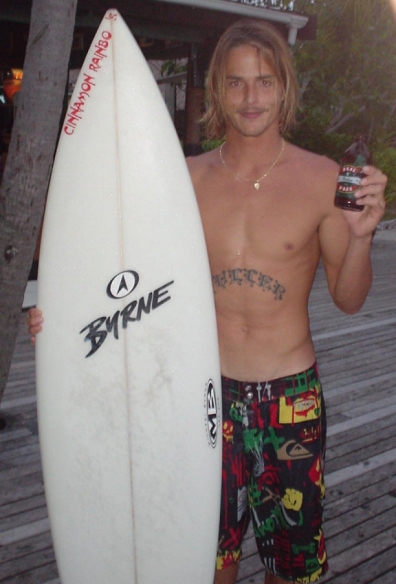