Looking at the calender this weekend, I realized that it's been one year since the birth of this new website and for writing this weekly column. Now, for all intents and purposes, I've been posting pictures on Cinnamon Rainbows for much longer. I think since 1998, or maybe earlier. I've also been posting surf pics on my other site Surf Free Or Die for way longer. But, it's this ' New weekly column' format that is celebrating our 1st anniversary. For the better part of a year now, the gang at CR has been putting out information and product that has been both fun and informative. Dave, Phil, Heather, Kevin, and all the other Shop crew have done an outstanding job. The man behind the monitor you look at, Paul Block has been instrumental in the cool look and feel of this site. So kudos to you Paul. The biggest addition has been the Wave Cam at the Wall. We all look at it. Everyday.

It's hard to believe a whole year has gone by.

A lot has happened since April 15, 2004. Like what? Well, the Sox are World Champs for starters. The Patriots are a Dynasty wining 3 out of the last 4 Superbowls. We've just experienced the Best winter in ages. In fact, we're still getting waves. If you haven't heard, there's decent surf today.

Lots of sad things too. We lost some friends and loved ones this past year. The key to losing someone, is to never forget them. The only way for that to happen, is to talk about them. And, we all witnessed the horror of the December 26, 2004 tsunami. The single biggest loss of life from a natural disaster in our lifetimes and it was caused by waves.

In short, it's been quite the year.

The last year writing this column has been especially rewarding for me. I guess it's because, I really had no idea how many of you actually read my column each week. I've had so many positive emails from so many of you. I've met many more out in the water, who have told me they read my column every week. I have to say, I am touched by all of you. And I am truly greatful for all of your kind words. Someone once asked me, "How do you find so many 'surf related' subjects to write about every week?" Well, that's easy. The thing about surfing and surfers in general is, we are such an interesting bunch of individuals. I mean think about it. I'm talking about surfers from our neck of the woods. New England. To the rest of the surf world, we're all considered certifiably insane. Surely, the thought of surfing in minus wind chill factors and in water temps hovering around freezing (32) we must look crazy to the outsider. I know we do. You know we do.

The California gang, the Hawaiian crew and even our southern brothers and sisters in Florida are slack jawed goofy when it comes to the extreme conditions we deal with. Throw in the fact, that we actually get World Class Surf and you got yourselves one unusual bunch.

Trust me, you guys are easy to write about.

Yesterday 1976. Jeff Crawford perfectly slotted in a dream wave.
I remember the first time I laid eyes on this photo. I stared at it for a very long time. It's a photo of one of my closest and dearest friends. Jeff Crawford. He knew what he had in his hands when he showed it to me. It was a bona fide photo of himself in a perfect tube. He had his ' then girlfriend' take the photo. Look at this shot! His girlfriend took it! Are you kidding me? Oh Jeffy, I can still feel the sting of jealousy seeing this photo again. Jeff and I have been on quite a few surf adventures in our lives and this place was hands down the best place we ever discovered. Where is it? Well kids, truth be told, it ain't a secret anymore. But I'm still not gonna tell you. I will say this. It's North of Cape Cod and South of Greenland (the continent). Remember...? Use your imagination...it's out there...go out and find it!
Photo courtesy of Jeff Crawford 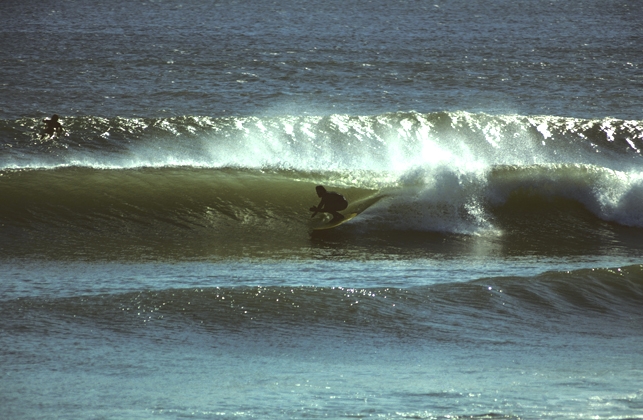 Today 2005. Jeff's Son Everest Having some fun in Thailand
This is my friend Jeff's son Everest. Clearly the kid has experienced more at his young age than most adults will
have in their entire lifetime. Riding elephants through the mountains and jungles of Thailand. Handling deadly King
Cobras. Spending a few winters on the North Shore of Oahu. Oh yea...he's seen some stuff.
Photos by Jeff Crawford 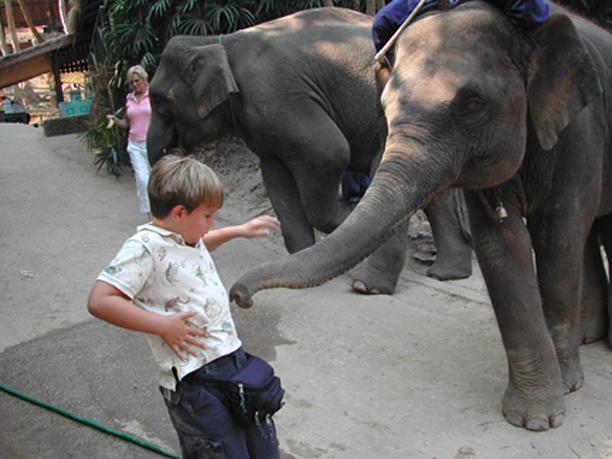 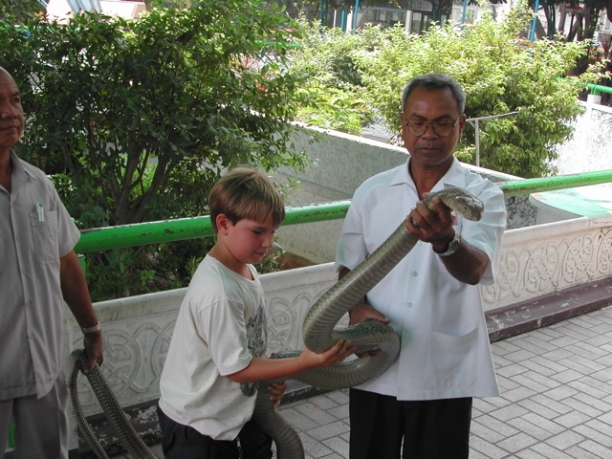 Today really felt like Spring. And if I may be so bold, I think we're out of the woods as far as Snowfall goes. Now I know we've had snow as late as May in the past, but I'm going out on a limb here and saying that it's all behind us now. However, if for some reason we get a few flurries here and there, please don't blame me.

I know it's Spring because my daughter Gabby went surfing after a winter lay-off. She was so stoked! So was I. I love to see her having fun in the surf. All you dads and moms know what I'm talking about. Gabby and I surfed the Wall on saturday. Now let me tell you, there were a few sets she caught on the head. And yes she went through the proverbial "ice cream headache" syndrone, but all in all, she was stoked to be back in the water. She caught a couple of long rights that had us both hooting. I was very proud and happy for her.

Speaking of girls...I'm seeing more and more women out surfing these days. I think it's great. I mean how could it not be? We have a pretty good contingent of female surfers in our neck of the woods. Some who surf year round. There's Nohea and Julia Nichols, Jen and her crew, Erica, and just a whole bunch more who surf right through the winter. And now that the warmer temps are here, expect to see Leah Grondin, Carly Gould, Heather Day and a host of others.

No offense boys, but the women seem to have a better understanding and compassion when it comes to sharing waves than most of the men and boys. There's a life lesson there for some of you.

Speaking of women. How many of you have ever had your poor girlfriend or wife stand out there in the freezing cold weather snapping photos of you and your buds? (See Yesterday Pic below) Come on be truthful. I know I'm guilty of it. In fact, my wife has shot some of the best video I've ever had. She's credited in most of my movies. There's a bunch of real good women photographers out there. Some of them got good because of guys like us. "Come on baby, just shoot some video of me and the boys. Just shoot the good waves. Baby? Please...hello?"

My friend Nick Valhouli says he spotted a couple dolphins last week while out surfing the point. Did anyone else see them? Typically we don't see dolphins that close to land and we sure don't see them in water this cold. Hope they were ok. Nick's going to opening a new Hair salon in Hampton next month. It will be called Jon Val's.
Look for it next month. Another friend has opened a new Mexican food restaurant in Newburyport. Mike Rosa is partners in the new Skate, Surf, Snowboard theme eating spot called "Bucky's Burritos". Check it out when you get a hankerin for MexFood.

Surf should be good tomorrow (Monday). Life is good again. Thank you again for a wonderful first year.

Click On Wave to Go Back to The Top.
Today 2005. Last Month, the Girls of Winter
Nohea and Julia Nichols with a chunk of ice in her mitt. Yes, I said ice. You got cold? I'd say so. Lenny told
me this large chunk of ice floated by them while they were out surfing. Julia grabbed hold of it and Lenny snapped
this photo. This photo speaks volumes of what we have to deal with. The bottom photo was taken in March after the last pretty snowfall we had. How many of you drove by this and didn't see it? The ocean was across the street. Did you notice this...?
Photos Courtesy of Lenny Nichols 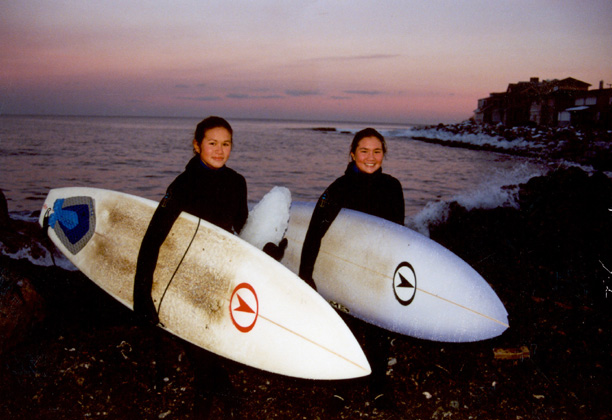 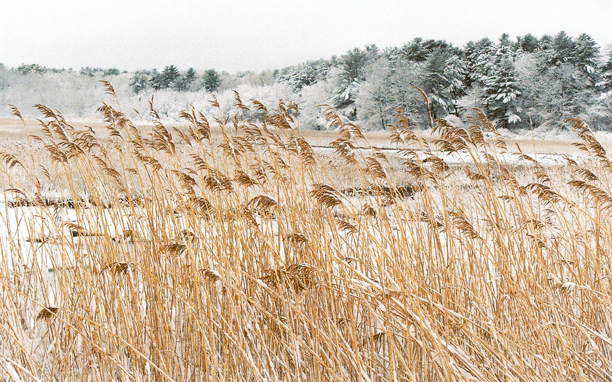 Today 2005. Pipe Charger
Riding a wave happens in many different forms. This is one of them and it is no less exciting if he were standing.
In fact, the wave looks bigger on your stomach, than it would standing tall in the pit.
Photo by Jarett Nicholas Arcand 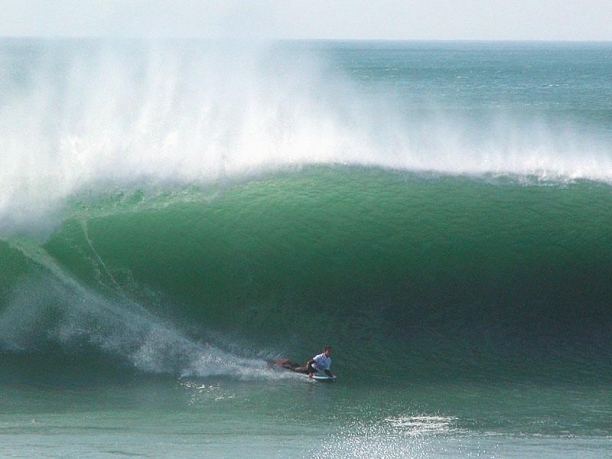 Today 2005. Different Strokes for Different Folks
My underground connection on the West Coast loves sending me these obscure images. He's always searching
for the unusual, the bizzarre, the downright insane images and he loves sending em off to me. Why? Because
he knows I dig em. And if I dig em...he knows you'll dig em too. Can you dig it? I knew that you could.
Photos courtesy of the Phantom 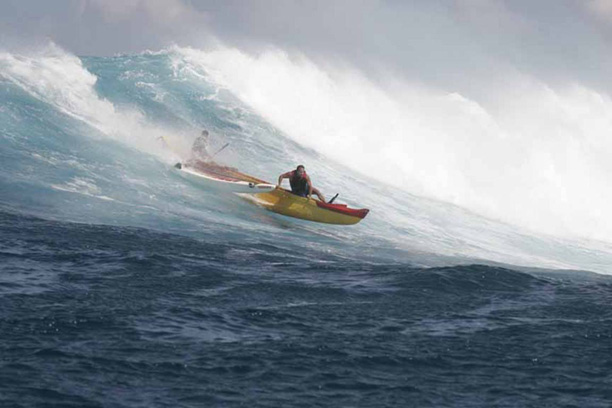 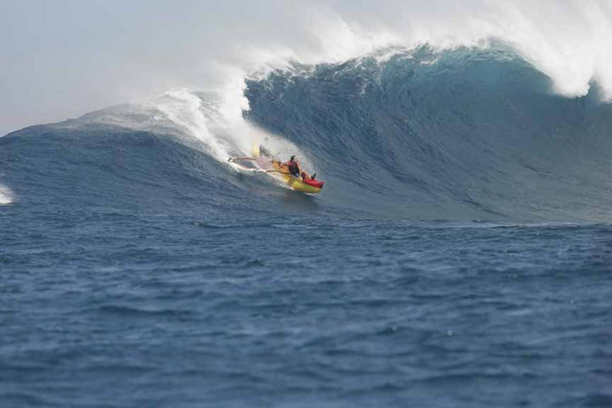 Today 2004. Gabby from last Summer
I wrote about my daughter Gabby surfing this last weekend after a long winter lay-over. She's so stoked to be back in the water. Just like she was the last time I filmed her riding this wave last year at Jeness. From the movie Monkey Punk. Video Frame grab by R. Fatello SFOD 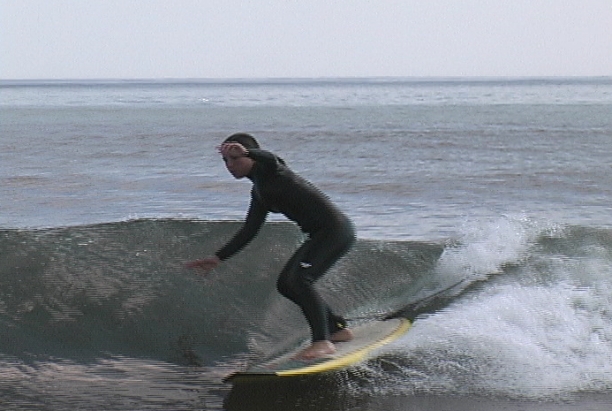