Go Out and VOTE Today. If you didn't Vote and you complain about anything in this world and in this country you have NO ONE to blame but yourselves. Well, it happened. The RED SOX won the World Series. And we just had 8 days of waves in what shop owner Dave Cropper is calling "The World Series Swell". What an amazing Come back Baseball story that was. 4 in a row from the Yankees and four in a row from the Cardinals. Did the Cards know they were in the World Series or what? I mean...hello?

Too bad the Patriots streak is over at 21 consecutive wins. What? You didn't think they were never going to lose again did you? Come on. Besides, that's one heck of a winning streak that may never be broken in our lifetime.

You have to believe. And, you have to believe in the wierd stuff too. My brother John pointed out that the last base runner for the Cards during the Final Out was wearing number 3. Babe Ruth's number. And there was a picture of two Sox hugging each other after their amazing Win that was taken from behind. Their numbers were 19 and 18. In the photo it looked like 1918. The last year they won the World Series.

It's still a GREAT Time to be a New England Sports Fan.

Yesterday. Harry Angles Back Into A Nice One 1984
20 Years ago, Harry Manzi from Salisbury Beach was a regular vistitor at the Wall. He was part of the whole Seabrook Surf Team that used to hang at 10th Street. Dean Savastono, Mike Paugh, Steve O'Hara and Harry were icons at the Wall. Harry has since had some medical problems involving his hips and has been sidelined for quite some time. He's married with three young sons and would like nothing better than to get back into the Surf scene with his kids. We hope he gets better to join us back in the water and invite his sons, Phil 1, Phil 2 and Phil 3 to join him.
photo Thom Moore 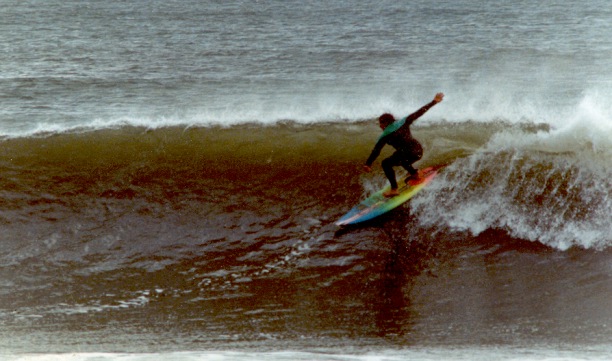 Today. World Series Swell Sunday October 24, 2004
Two different shots from the 24th that clearly shows both the quality of surf we had during that great "World Series Swell" and the crowded conditions of the day. Plenty of room? Sure...but only if you're friends with the guy in the passing lane.
photos by aaron rohde

By this time tomorrow (Nov. 3rd) we should all know who our next president will be. Those that know me, know who I want. I believe very passionately about getting out the Vote. I hope you were all good Americans and voted. I truly hope that whoever wins, is able to put a stop to World Terror. We must continue to fight those Evil SOB's who are making it hard for all of us to travel around this world and find fun, warm and peaceful surf destinations.

Hope you all had Happy Halloween. What's next? Oh yea, Veteran's Day and then Thanksgiving. Then the big Holidays Christmas and Chanukah! Is that true? Oh oh...better book my flights to the Warm water soon before I forget. You all should do the same. Book them flights early and save a few bucks.


Congrats to the RED HOT RED SOX! And to the NFL record Holders New England PATRIOTS! 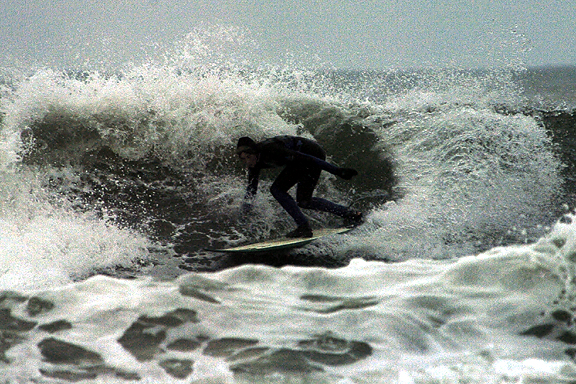 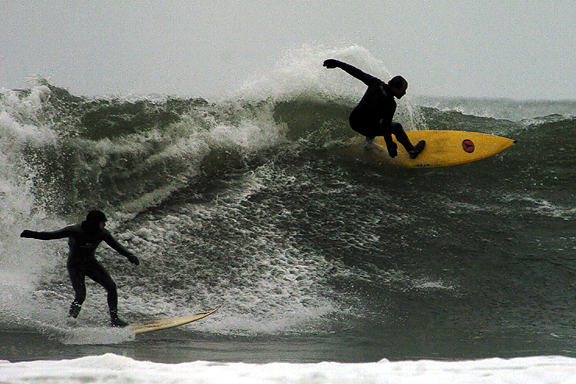 Johnny Meehand has one eye on Lenny's yellow board and the other on that collapsing lip.