August 1st, 2004
I was standing on the beach yesterday listening to a pack of Groms talk surf. You haven't lived until you've eavesdropped in on the under 16yr old's take on life. "The world would be a better place if eveyone surfed!" One of 'em piped in."WHA-???" I blurted out, as I blew the mouthful of coffee I was about to swallow. "Whoa, did you hear what you just said? The world would NOT be a better place if everyone surfed. Especially our world." I chimed in."Well it would be,
(he said), if there were more places to surf and everyone could surf." It's hard to deal with that kind of logic so early in the morning.

Where was I and what was I doing? I was at the 2nd ESA-NNE surf contest of the season. There were groms from all over NH and Maine as well as the Men's and Women competitors.
Which brings me to my main subject today. Surf Contests. Love 'em or hate 'em, they have been a part of our surf culture ever since the sport was born. And, here in the cold, flat, Northeast, it is thriving.

Now before any of you "Soul Surfers" start cringing with pain, I think it's important to know, that I will go to my grave with a perfect Contest Record. How's that? Simple. I never entered one. However, all my kids compete, as do a lot of my close friends and their kids. For the most part, I look at contests strictly for the kids benefit. It promotes many redeeming qualities that the youth of our sport need. First and foremost, they learn at an early age about the act of "dropping in."
In a contest, if you drop in on someone, you get DQ'd.
In the Free Surf world, if you drop in on someone you get yelled at (or worse). I'd like to make an amendment to the Grom's earlier statement about everyone surfing. What if everyone who does currently surf were to get DQ'd for dropping in? Surely, the world would be a better place. Especially our world.

Yesterday. SPEED STREAKING 1974...
The photo below is of a very good friend of mine. Jeff Chamberlain. Jeff lives in Central California with his wife Paige and two daughters along with their two dogs. Jeff's a Harbor Patrol Warrior, who's constantly in the thick of things out there. From pulling off hairball rescues, to dealing with armed bad guys, Jeff and his crew are fighting the good fight. He's also a Surfer. There is no one I know, who knows more about the history and subculture of our sport, than Jeff. He also happens to be the most prolific writer of Surfing that has ever graced any page, of any surf magazine that you have read. He's the real deal in every sense of the word. I could write a book about him, but then again, he could do a far better job of it than me. One of these days (he claims,) he's gonna pay us all a visit. I'd expect nothing than a full on New England warmth of well wishes from all of you, if that day ever comes. Hopefully, there will be surf when he gets here. Enjoy your New Hampshire glory my friend as one of the Pic's of the Week. 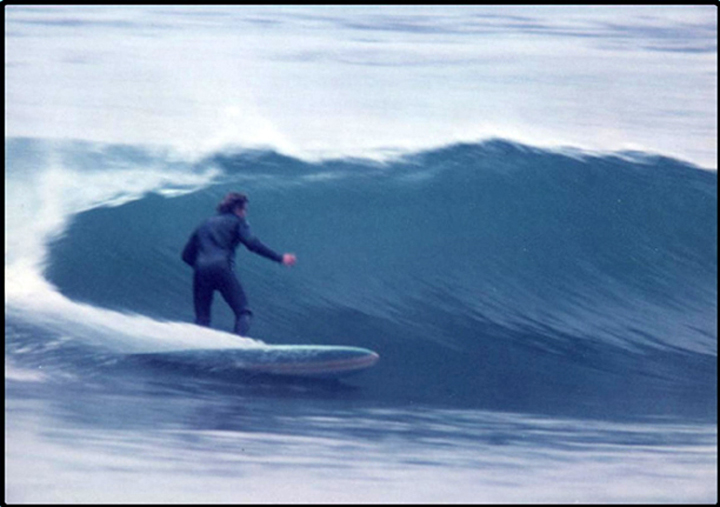 Today. GIRLS SURF TOO!
I know I have been neglecting the girls and I apologize for that. Please know that I only post what I get in my mailbox and what I have in my library. I'll try to make an effort to post more girl photos when I get them. Meanwhile, here's a clean shot of Shop Girl Gabby Fatello sliding into some evening glass on July 26, 2004. July was a good month...let's hope August is even better.

Seriously though, there's a lot of hard work involved in pulling off a successful contest. From getting the sponsors, to buying the trophies. Setting up the tents and music. Getting everyone signed up before 8AM and trying to accomodate late entrys...it's hard. I've seen it first hand. Not too mention the simple fact that, you are on Mother Nature's watch. It's either feast or famine out there. No sport has to deal with the elements like this. I said recently to a friend, "It's like being in a Pond Hockey league. Sometimes the ice is perfect. Sometimes the ice is terrible." The Nichols family and Bob McNeil work their butts off to make it happen and they pray for surf like no one else. Sometimes they get lucky. Like when Cinnamon Rainbows sponsored the first conest two weeks ago at the Wall. There was surf and it was good. Granted, it didn't last all day but, there was surf.

The kids have fun. And as we all know...surfing is fun. That's keeping in line with the contest theme. FUN. Besides, how can you not have fun if you get lucky enough to have waves in your heat and the surf is going off? Think about it. Surfing with just a handful of your friends in perfect waves. Now you're getting it cracky.

I can see a few of you signing up at the next contest just to get some uncrowded waves. Who knows...you might win. And how you gonna explain that trophy to your buds? Simple. 3 GUYS OUT in 6' SURF!

Speaking of Sports..nice knowing you Nomar...Red Sox better win big now or people will talk. Also...there's a storm brewing down south.
Get ready...she's coming. Get your work done now.
Until next week....Pray for Surf. Pray for Peace. Surf For Fun. 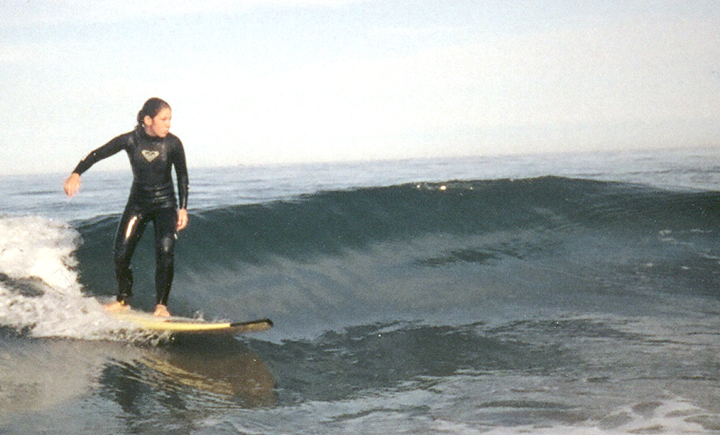