I woke up yesterday morning and there were rows upon rows of animals lined up in my yard. Two from each specie. A male and a female. Standing there in the pouring rain, shivering from the wet and cold. They were all chanting, "Build us an Ark...Build Us an Ark!"
Of course, I was dreaming that I was in a Noah's Ark Movie. You know, the 40 days and 40 nights of rain.
But seriously folks, how many days of rain was that? Someone said 10...is that true? The funny thing about all that rain and wind was, although it did bring us surf, it never really cleaned up until today...and then it really cleaned up, and basically, it went away.

That was certainly a wild and wooly week.

I was a bit premature about the Tropical Storm Vince rap as well. Although there was an actual T.S. Vince (Hurricane Vince), it was not the system that I was initially watching. I was looking at the mess that eventually gave us all this rain (and surf). It was the sub tropical system that was forming off the Bahamas and Florida. The first early reports had that system on the cusp of being named Vince. But lo and behold, a sneaky little Tropical Depression formed off the North West corner of Africa while the TD down off of Florida took it's sweet time. The TD off of Africa quickly turned into TS Vince and then Hurricane Vince and it sped off for Portugal and beyond. Thus my 15 minutes of fame was swept away towards Europe. It was depressing, to think that once again, another Hurricane Season had come and gone, and I would be denied the right to surf a storm bearing my name (or nickname).

Don't worry about me kids, I'll get over it. It's only surf. And like I've said many times before. Surfing is like riding a bus. If you miss one swell, there's always another one coming. That's what I like to think. I know some of you who read this column every week can't get to the ocean everyday. In fact, some of you have a hard time getting to the ocean on weekends. And if there's no surf on your weekend off, well...you have to wait for it. Or, plan a trip.
But for most of us, there's always another swell coming.

Unfortunately, that's not the case with some other ocean loving surfers. Sometimes, the bus stops. And you get off. Forever. There are no more swells. There are no more days on the beach. This happened to two young girls this week. Two sisters who loved the ocean and who took up surfing this last summer, lost their lives in an auto accident on Thursday night, October 13, 2005.

I got an email from John DeVries a surfer from Massachusetts who was good friends with these two sisters. Shauna and Meghan Murphy.

Yesterday 1985 Duffy McCarthy Surfing in October
Duffy is a good surfer and a good friend. Every now and then he comes home to visit his family and friends in Hampton. And if there's a good swell running, he's on it. Especially if it's October. We miss ya Duff!
Photo by Kim Grondin 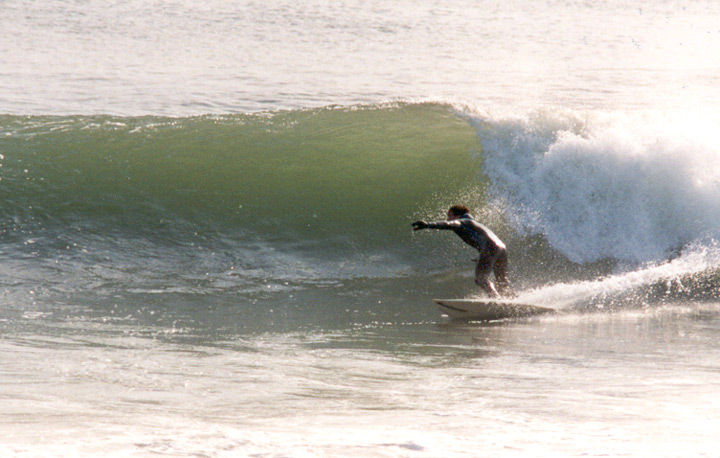 Turns out, John's a regular reader of this weekly column. He has been since I started it. He said he enjoys the weekly rants and insights and of course the photos. For the record. Typically when I get email from you guys it's mostly about some swell we're getting, or a surf session, or to share a laugh.

It's rare that I get an email this sad.

John knew these girls well enough to write me. He grew up with them on the beach. They were a part of his "Beach Crew" on Wingaersheek Beach in Gloucester, MA. The oldest sister Shauna, 17 was really into surfing. One of John's best memories from this past summer was teaching her how to surf. She caught 3 waves that day and rode them all the way into the sand. He couldn't believe how fast she picked it up. And he'll never forget her looking back out to him with such a huge smile on her face after each ride. Meghan her younger sister, who was also killed in the wreck, was only 15. She loved being out in the water. She could be spotted skim boarding on the beach all the time.

These girls loved the beach and the ocean.

Apparently these two young beautiful girls touched so many people both within their beach crew and beyond. Their brother Jeff is a surfer who surfs with John.
Let's all take a moment in our busy lives and say a prayer for them and their family and friends. We all know women and girls who surf. We all have sisters, daughters, cousins, friends, wives and girlfriends.

Don't take each day for granted. Don't wait to say I love you, or I'm sorry when it's convenient for you. There may not be another time. Be a good friend, a good brother, a loving husband and father today.

On behalf of everyone in our little surf community, we extend our most sincere condolences to the family and friends of Shauna and Meghan Murphy.

Today 2005. This morning, October 16th, 2005 The Wall
The swell that hung around for 5 days finally left this late morning...but before she did, my main Maine Man Ed O'Connell snapped these pics for you all to see. Thanks Ed.
Photos courtesy of Ed Oconnell

WHO DA GUY? Goofy footing Longboarder at The Wall This Morning...
Photo by Ed Oconnell 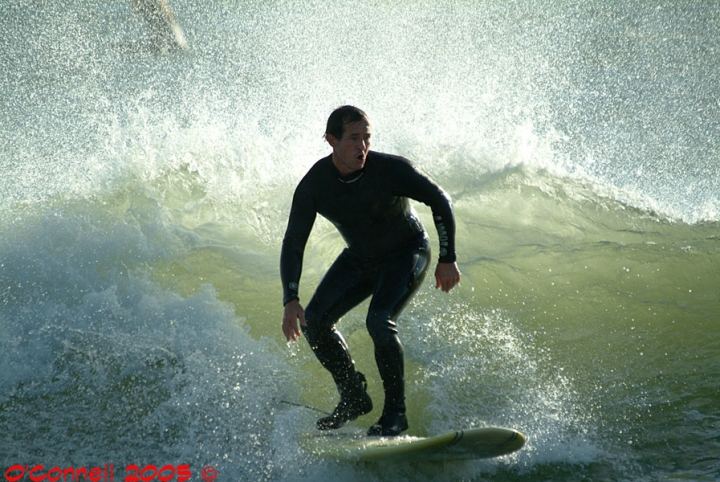 WHO DIS GUY? Regular foot Stomping Longboarder at The Wall This Morning...
Photo by Ed Oconnell 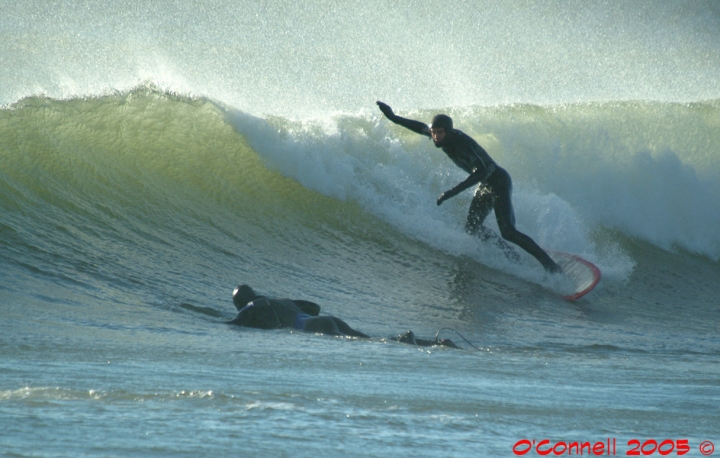 AND WHO DIS GUY? Regular foot leans into a green one at The Wall This Morning...while negotiating a lone paddler. And why is he wearing a hood and gloves? Is it that cold?
Photo by Ed Oconnell


Today 2005 This Past Wednesday
The start of the five day swell. The Ocean was churning this day and she burped and shook for 4 more days...did you get any?
Photo by James Mitchell 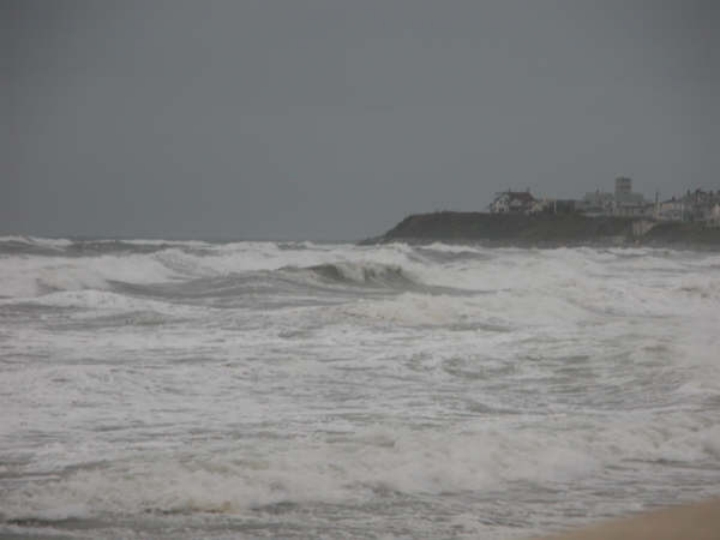 Today 2005 Thursday October 13th, 2005
This is a photograph that John DeVries took the day these two sisters were killed. The photo was at Wingaersheek beach. Two sand dollars in the sand with their names on them. He put them near the high tide mark so the waves could wash them away.
You're a good friend John. And I'm sure the Murphy family appreciates your thoughtfulness.
Photo by John DeVries 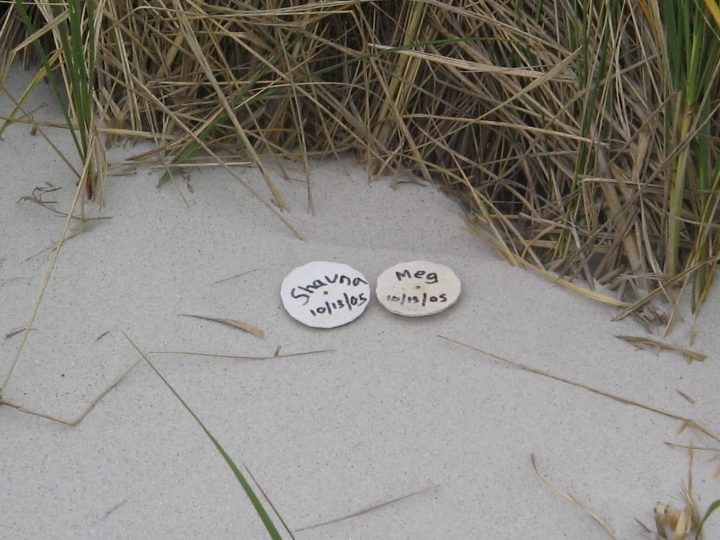 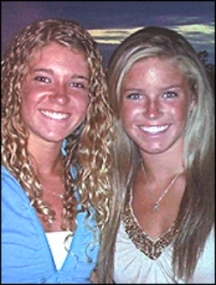