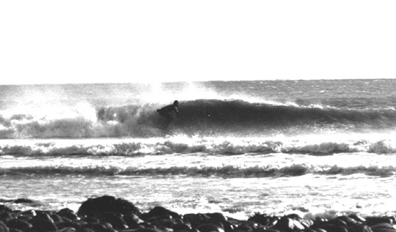 June 6th Newsletter 2004
60 years ago today, the Allied Forces of the world landed at Normandy Beach in France to defeat the Nazis. My neighbor's father was there. He was awarded the Silver Star for saving the lives of 28 men on that beach. He was a medic. He passed away a few years ago. I thought of him today as I watched his son mow the lawn. He had to have been thinking about his father today. 60 years ago. The world was different place then. Imagine what it was like being a surfer in the 1940's.

This day is also significant as the president who help defeat communisim passed away at the age of 93. Ronald Reagan helped end the Cold War. People are free today because of men like them. Free to Surf.

Yesterday I watched Smarty Jones almost win the Belmont and become the first Triple Crown Winner in over 20 years. But it was not to be. A horse named Birdstone took it. It was sad watching the jockey and owners apologize to everyone for winning. Are you kidding me?
No need to apologize for doing what you're supposed to do. There's a lesson in there kids. And that lesson is; You have to EARN it. There's no such thing as deserving. Everything you do in life must be earned.

Wasn't that fun surfing two days in a row last week. I don't know about you guys but my butt was out of shape out there. The Wall was pounding on Wednesday. But dang, it felt good to get slapped around for a change. Of course once we all got back into the groove the swell dropped. Looks like Surf Monday or Tuesday...so keep your eyes watching the Wave Cam. She don't lie.

Yesterday
An unknown Goofy foot rides through a sweet section at one of our infamous Point breaks. The date was Thanksgiving 1970. This guy was one of two who were out that day. The other Surfer was Steve "Surfer Crow" Watson. Yes that's a beaver tail flapping in the offshore wind. And yes, he had no leash.Another case of the Wave Remains The Same. 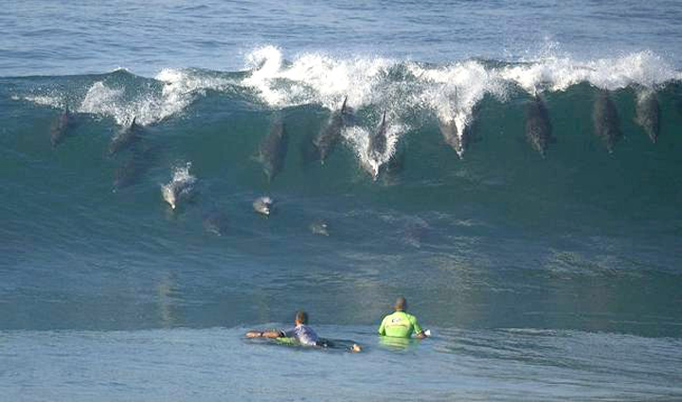 "My Wave! Going Right!! Going Left!! Going Straight!!!"
If you don't think this is unnerving you are mistaken. Having been in this exact position just 3 years ago, I can tell you first hand this is such a freak out that I'll never forgot it. The winter of 2002 and I was surfing in Central Cal with just 3 friends when a pod of dolphins joined us. At first it was neat. Sharing waves with dolphins was so cool. I can remember riding along on a wave and have these large animals join me in the face of the wave. It was an amazing wonderful experience. Then this happened. Just like these two guys above, we were paddling out when we saw them racing at us at an alarming rate of speed. And like above, they were in the face of the wave! What would you do? What did I do? I just froze. I stopped paddling and sat up on my board and ducked. Ducked? Yep. One dolphin went up and over me and one went under me. It's like they knew exactly what I was going to do. Did it freak me out? Absolutely. Trust me, these two guys are freaking. You would be too!