Well it's official. We now have three seasons. Winter, Summer and Fall. The season formerly know as Spring has been completely removed from the equation. The weather yesterday and today was Summer like. I do not recall experiencing much of what used to be called Spring Time in either April or May. No, it was definitely Summer today. I'm not complaining here friends. I'm just making a causal observation. We went from a week of heavy Northeast winds to a typical Summer temperature. Crazy? You bet it is. But, this is New England. None of us should be surprised.

The good news is, the summer weekend brought yet another swell. How many swells have we gotten since January? Gotta be at least once a week. Hope you got out to play in the Summer like waves. Both Saturday and today was fun. Except, yours truly made the mistake of wearing my 4/3 with mitts on Saturday. Suffice to say, my hands were beyond warm. In fact, they were burning up. Plus the 4/3 felt like a 6mil.I was dying out there. So off with the 4/3, and on with the 3/2 today. I felt much looser today without the additional rubber. It was good to shed. Because, the shedding led to shredding (No I didn't just write that). Please forgive me.

I saw something today, that I did not think I would see, (at the very earliest) until September. I saw Rick Evans catch his first wave in three years. If you remember, I wrote about Rick a while back. He's Megan, Matt and Mike Evans dad. He had both of his hips replaced.
Yes I said both. Intense and painful operation, it's uncommon for anyone to be able to do what Rick is doing right now. But what the doctors don't know or really understand is, Rick is a Surfer. And surfers tend to heal quicker and get beyond the daily therapy quicker than most blokes because...well, because they surf!

It ain't rocket science. Surfers will always find a way to surf. No matter how bad things are. They will find a way back to Mother Ocean.

Rick found his way back today. Sunday, June 5th, 2005. I was wading out with my board when I spotted his first wave. It was a left. About waist to chest high. Rick is a Goofy foot. He sprung to his feet just in time to hit his bottom turn, and the rest, as they say is history!
Did I hoot? Man did I ever. I was screaming so loud I didn't care who heard me. Joe Carter was standing next to me when I started hooting. Joe caught wind of what I was doing and he too started hooting.
Rick was stoked, as was his wife Karen and two sons.
Hell, we were all stoked. It was a bona fide Hoot Fest.

I just wished I had my camera with me. I told him, my written words would paint a picture. I hope it they did.

Yesterday 1978. Young Tucker tucked away in a Cove
I remember seeing this photo for the first time. It really looked neat back then. It still does. My fiend Jeff has a good eye for composition. The framing of this photo makes it look like it's in Uluwatu or some place. But it's not. It's an hour from Hampton. Nestled somewhere in a nook or is it cranny? Does it matter? It's out there kids.
Photo by Jeff Crawford 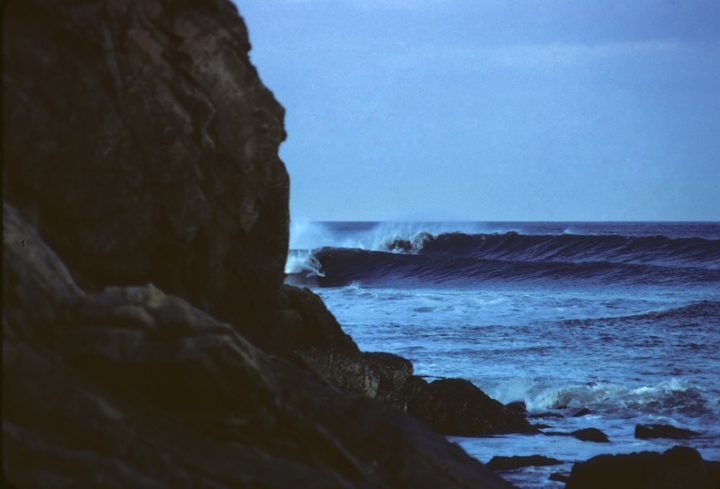 Yesterday 1969. Dave Hartnett New Hampshire Beach Pose
We all remember being this young once. Sun bleached blonde hair. The old wetsuit. It's all there. The question is where is that board? That baby could be worth something today.
photo courtesy of Dave Hartnett's family 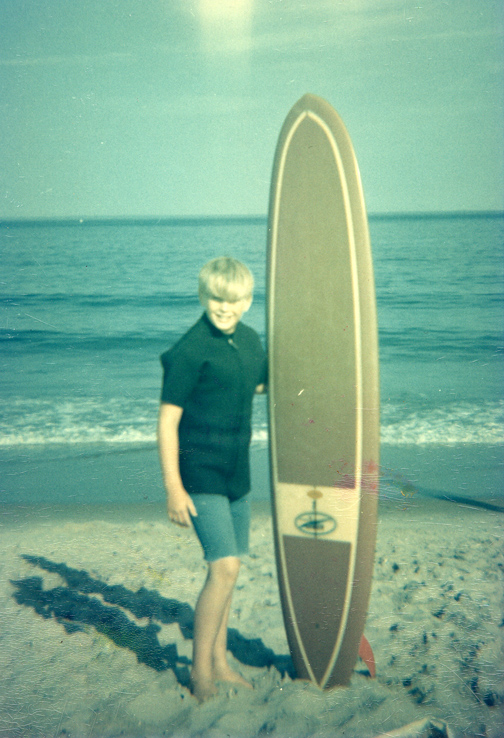 Watching Rick surf today, reminded me of how everyone I seem to know in our little surf community, has their own unique style. Have you ever noticed that? We all have our own individual surf style. Think about that. How many of you can pick out any one of your buddies when your standing on the shore line or down at the next peak? I know I can. I also know that, I can't tell the difference between most of the pro surfers today. To me, they all surf alike. Granted Kelly Slater is a recognizable surfer, but the others...? Take them all and throw em into one pot and take your pick. They all surf alike. Don't get me wrong, they (the pros) can all surf circles around me and most of my friends. It's just that they just seem to too mechanical to me. They have a certain repertoire and they all stick to it. It's like a job to them. You know. Hit the lip here. Do a floater here. a Big cuttie here. Pop an air here. All fluff and no soul. Whereas, all of us regular folk...well, were different. And that's a cool thing. You should all feel good knowing you have your own unique surf style.

How many of you noticed the new surf movie on the home page of this website? It's a little short film I put together for your viewing pleasure. Most of the footage has been used in 13POINT5 and Monkey Punk. However, there is some never seen before footage as well. Speaking of movies, the WINTER 05 project is getting closer to a release date.
There's just soooo much footage to look through. Aaron Lyon is contributing to the movie as well as a couple of other local photographers, like Jamie Wade and Bob Constentino. I'll keep you all posted when we're close to releasing it.


Next weekend is the first Surf Contest of the summer. The kick off to the 2005 season is almost here. Once again, Cinnamon Rainbows is sponsoring the event. If you haven't joined the ESA-NNE district, it's time. If you have young children or younger siblings have them join the ESA-NNE. It's a fun atmosphere for the kids. I personally enjoy them. And that's coming from someone who's never entered a contest in my life. Truth be told. Lenny Nichols does a good job with the kids.

To my two friends who shared those waves with me tonight, I just wanted to say how much fun that was. Hope you caught a bunch more after I left. It's all about the glide...

Today 2005. Mike Moran Mexican Pipeline
This wave is intense. No, this wave is VERY INTENSE. To surf something like this on a shortboard or semi gun is one thing. But to surf it on a longboard...well....that's just INSANE! Mike Moran doing New Hampshire proud as he charges a true Mexican Beast in Puerto Escondido. Holy Crap Mike!
photo by Brian Nevins 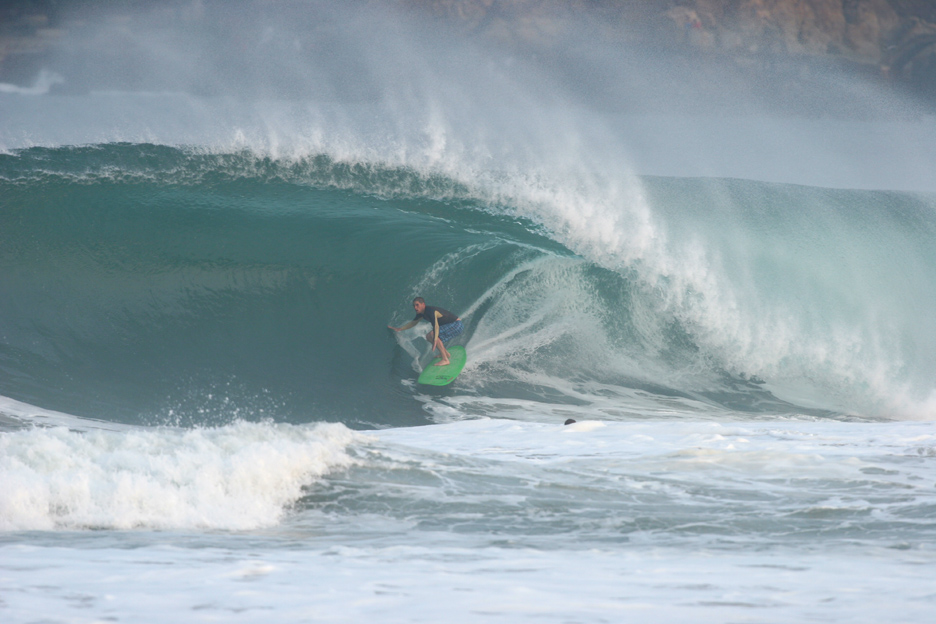 Today 2005. Dave Hartnett at Witches Rock in Costa Rica
Taken last month while on a family surf trip. This is the same Dave Hartnett from above. The couple in the picture with Dave are from Tennessee. Not exactly the surf capital of the world. However, according to Dave this young woman was fully charging it in significant surf at both Ollies and Witches. Jared and Cierra Waite from Davey Crockett's home state.
photo courtesy of Dave Hartnett 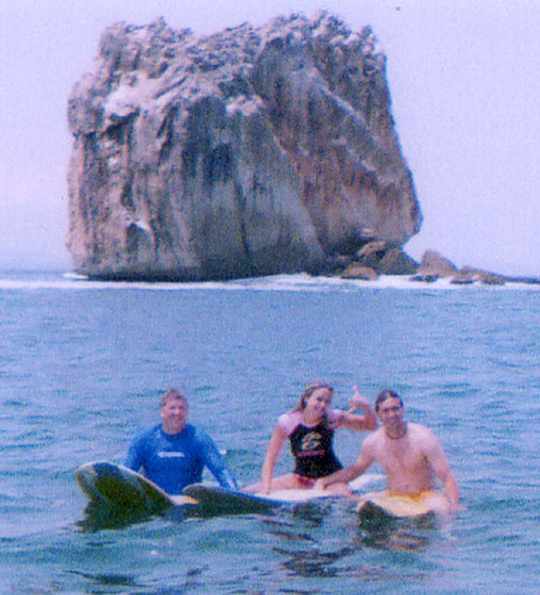 Today 2005. Somewhere in Northern New England
This is a beach break. Yep. Looks like a point break, but it's really a beach break. And...it's not known for the lefts. Where is it? Ha! You know I can't tell you that...
photo by Jeff Crawford 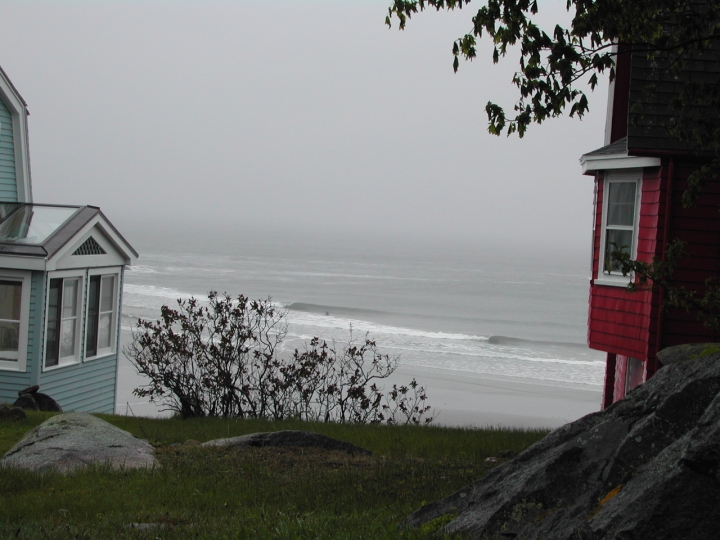 Today 2005. Ralph and Kevin with my latest acquisition
Taken in the shop last month. This is the day I picked up my new Rusty. I like this board. It reminds me of my old BH that I bought from Stevie years ago. That board was a 6' 4" this one is a 6' 8"...and yes it's a short board to me.
photo by Max Fatello 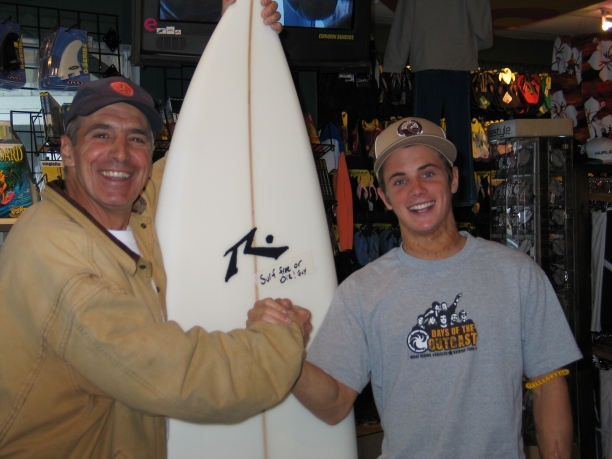 Today 2005. Last Week's Wicked Nor'easter
Taken somewhere in the great state of Maine during the week of Northeast winds...Unidentified Rider with a clean face all to himself.
photo by Featherman 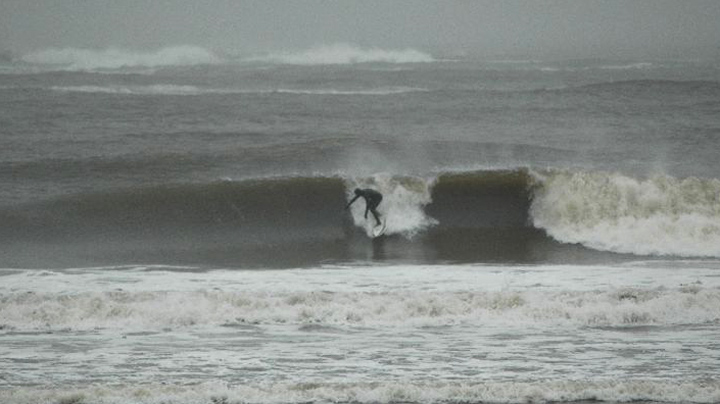