Cindy came to town this weekend. Did you get to meet her? No...? Too bad, she brought some clean waist to chest high surf on Saturday and then she threw us some left overs today. Still, if you didn't get to surf you didn't miss a whole lot. Just some more clean summer surf. This is the 2nd week in a row for fun summer waves. And I don't have to tell you about Hurricane Dennis do I? My guess is we might see something from Dennis by the end of this week...maybe in time for the weekend. If that happens...we may be on course with one hell of a summer. Keep yer fingers crossed kids we may be talking about this summer the way we're still talking about last winter.

Speaking of summer. Last Monday (4th of July) ended in an absolute tragedy on Hampton Beach. Two men from Massachusetts ended up drowning after getting caught in a "rip." The Riptide at the Main beach last week wasn't that strong. So, could that horror show possibly of been avoided? Yes. Look, we all know about Rips. Hell, most of us use 'em to paddle out. We just know how to get out of them. Just in case someone reading this does NOT know how to get out of a rip pay attention. RELAX. DON'T PANIC. Let yourself go out with it and then slowly but surely work your way out of it by swimming (or in a surfer's case paddle) parallel to the beach. When you feel less resistance swim (paddle) in towards the beach. Remember the waves and whitewater will always push you back on the beach. The Lifeguards had been warning people all day about the rips. They had just gotten off duty when the call came in for help. Remarkably, the Guards made 10 rescues. The Lifeguards did a great job, and we as a community, should all be proud of them.

Which now brings me to my next point. Drinking on the beach. Friday morning my son cut his foot at 10th Street. He stepped on some glass from a smashed Beer bottle. Look, I didn't just come down with yesterday's cold front OK. I understand the whole teen and 20's deal. You know, been there done that. However, I never, and I mean NEVER, EVER, broke a beer bottle on the beach.

For the life of me people, I just don't understand how anyone can break a bottle on the beach. I just don't get it. I don't understand that mindset. Personally, I think who ever breaks a bottle on the beach (especially a beer bottle) is a complete 100% MORON. I'm talking about a total idiot of a person. Someone, I hate to say, who has NO business breathing the same air as we do. And I'll say this too. If I ever catch someone breaking a bottle on the beach, we are going to dance. And we're gonna dance very freaking hard. And, it ain't gonna be pretty. So, if you know of anyone who's busted bottles on our beaches I'm asking you to please speak up and take a stand to protect our beaches.

We need to keep our beaches clean and we need to police them as well. Take a stand against morons.

Yesterday 1988 A Granite State Point Firing with only a few to witness
NH transplant Tony Z sent this old photo in from the West Coast. He snapped this baby back in '88. Tony writes all the time about how much he misses our waves and friends. Tony if you're reading this...you're only one Red Eye Jet Blue flight away...
Photo by Tony Sczabo

The ESA-NNE's contest was a huge success this weekend. Good waves and good surfing are always a good combination, especially for the tourists. I love listening in on the comments by the errant tourist. "Did cha see that Uncle Willy! That kid went flying into the air!" Oh yea...it's good stuff. The Groms, the Rippers and the Old Timers all got to strut their stuff at 10th Street. Cinnamon Rainbows sponsored this first event of the 05 season and by all accounts, it was BIG fun. The next contests for NNE is this coming weekend in York Maine. If you know of any kids who might be interested in competing send them up to York Beach Maine July 23rd. Or go to the NNE-ESA website.

OK class it's time for the 4th Summer Installment of:
"Ralph's Tip of the Week".
The last 3 weeks we talked about Holding On To
Your Board, Paddling Common Sense and
DROPPING IN.
This week it's KNOWING A LEFT FROM A RIGHT.
Just today, I was out surfing when a perfect Right popped up on the outside sandbar. I was in perfect position to catch it. Now, granted the waves were small today, but on a Longboard they were quite fun. I was riding along when I noticed that there seemed to be a paddler trying to catch the same wave that I was already on. Not only "on" but On and Riding. The person finally relented and let me pass. When I paddled back out I had to face him. He thought that he had possession of the wave. I told him in a calm way that I WAS IN POSSESSION. He said something to the affect that he thought the wave was a left and he was going in that direction. IT WAS A RIGHT! I commented back at him.
How many of us have been in position to catch a Left or a Right and then backed off because the person next to you appeared to be going for the same wave and because he was in position you backed off. ONLY to look on in horror as that same person went in the opposite direction. Look a Left is a left and a Right is a Right. DON'T GO LEFT ON A RIGHT and Visa Versa.
How can you tell the difference?

Ok...I'm not going to explain this at the Point breaks because if you don't know what the dam wave you're surfing is at a point break you are BEYOND my help. I'm talking Beach break here kids. Facing the Ocean. The wave that 'peaks' up in front of you usually has a a peak (high point of the wave) and a shoulder (the open face of the wave). If the wave is breaking towards your right (facing the ocean) it's a Left. So if you paddle for this wave (now facing the land) you have to ride towards your left. Same thing on the other side of the wave (do the math). In short people...use your directionals. Or the very least, call out where you're going.
Thank you.

Next week's Tip How To Use That Leash.

Today 2005. CR SURF Contest Pics from Saturday
All the Good, the bad and the ugly...
Video Frame Grabs by SurfFreeOrDie.com 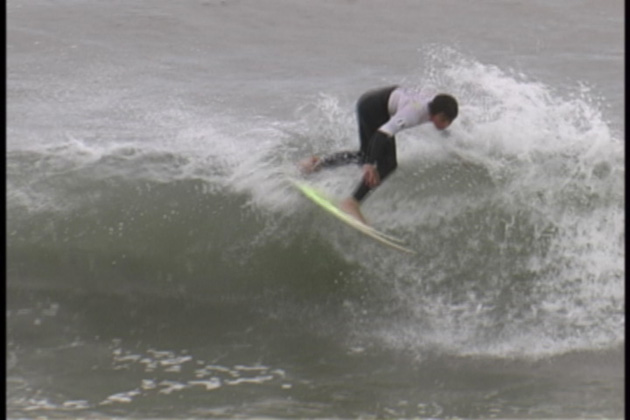 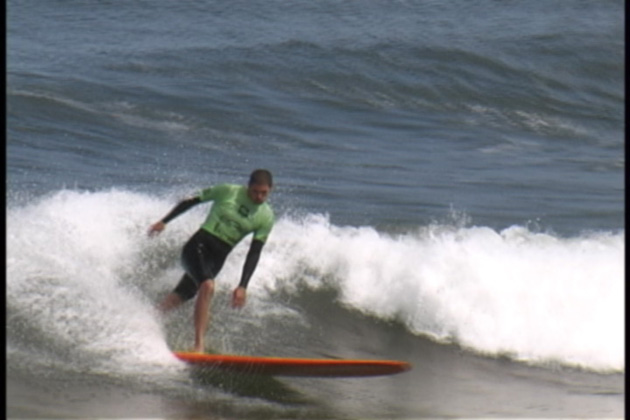 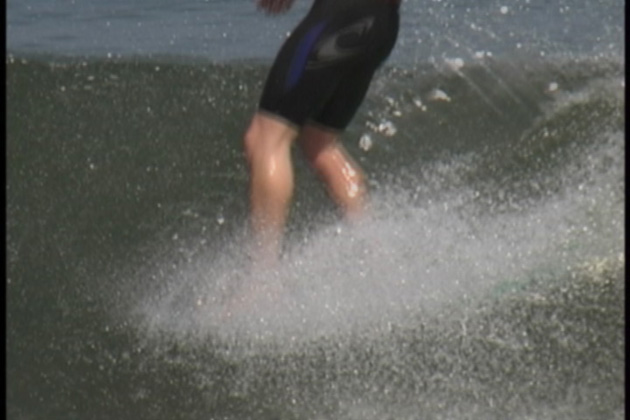 Whose Nose Riding technique is this? Roll the mouse over the image below and cast your vote. Mike Moran? or Mike Zap Paugh?

Mike Moran from last winter in Mexico...click on this image for a very impressive series of photos of Mike in Mexico photo by Rueben Pina 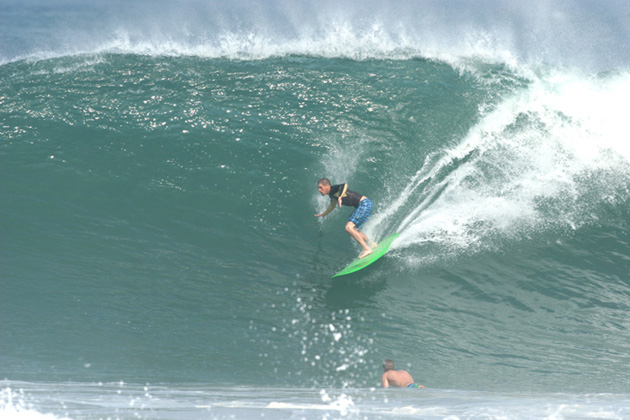