So, it's Super Bowl Sunday...whoopee. Wonder if the Patriots will win tonight...oh that's right, the Patriots are not in the Super Bowl this year. Dam. Well, in that case, I guess I'm hoping that the underdog wins. Who's that? Well, the Seahawks. I hope they win. Why? Why not? For starters, the Seahawks have never won a Super Bowl plus, they have ties to the Patriots. How so? The fathers of both Hasselback and Tatupu both played for the Patriots. And the name Seahawk has some kind of Ocean theme, so, I'm leaning towards them. And I like rooting for the underdog as a rule. I guess it's that New England, East Coast mindset.

Besides being Super Bowl Sunday, this week was quite the week for Super Bowls out in the ocean. Man. If you saw the Surf on Wednesday February 1st you know exactly what I'm talking about. My guess is...the surf was good everywhere. The photos I'm posting today will attest to that fact. In fact, I'll be keeping the writing down because, as the old saying goes, "a picture is worth a thousand words" and the pictures from that 02-01-06 swell speaks volumes of what it was like.

Suffice to say, it was quite a swell. And, there were some epic photos coming into my mailbox from a handful of local photographers. Some of the photos, were of the same wave and rider, but different angles. Which is kind of neat in itself. It's also a reminder (to me at least), of how the lifestyle is changing from a photographer's perspective.

Just a few short years ago, there were only one or two photogs out snapping shots. Now-a-days there's upwards of a dozen guys (and women) out shooting. Digital still photography and the auto focus has added to the calamity. But having said that, you still need to know surfing to get a good surf shot. I mean you REALLY need to know surfing. Any Chimpanzee can aim a camera at the ocean and snap a photo. And sometimes, them Chimps get lucky. But it takes talent, knowledge (of both surfing and photography) and creativity to get a good shot. Fortunately, for all of you reading this weekly posting, we have a good mix of talent, both in the water and on the land.

That's why your Monday mornings are so enjoyable.
You get to see it all... The Chimps, The Chumps and The Champs.

Yesterday 1974 Walking Out To Empty Wall Perfection
This is a photo of an old friend of mine. Larry Crateau. He and I were best buddies and surfed a lot of special places together during the late 60's, and the whole 70's and early 80's. Then one day, he decided to give up on surfing. That was hard for me to understand. I tried to get him back into surfing for the longest time over the years and then eventually gave up. Larry, if you're out there and you happen to stumble upon this photo, it's not too late brother. It's never to late to go surfing again.
Photo courtesy of SFOD 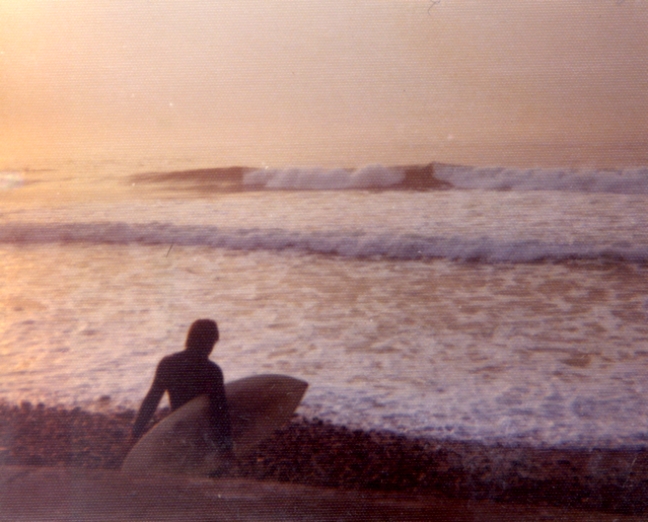 There was a front a page story in the local Portsmouth Herald today about the lack of Winter we're having. In the article, they were all complaining of not being able to do outdoor winter activities. They were talking of course, about ice skating, ice fishing, skiing and a number of other frozen games. I guess Winter Surfing is not considered a Winter Activity. How is that possible in 2006? Don't know and don't really care. It's just another case of Surfing flying in under the radar again. It's like we don't exist. Which is good for us. While I feel bad for the lack of "traditional New England " Winter activities, I feel good, for all of us, who surf year round. Every one of you who has surfed this winter will agree, it's been warm. Now, some of you reading this will reel in horror at the thought of Surfing 38 degree water temps with 50 degree air temp. But the truth is, that's WARM for us. In the Winter. I'm not talking about the Summer. Talking strictly Winter conditions.

As cold as it was last Winter it's been as Warm this winter. But the good news is...it's been consistent! We've had three different swells this week alone! The snow has melted! People are riding bikes and walking around in short sleeve shirts. Hello? It's freaking February. How is this possible? Is this Global Warming? Maybe. You know what else I heard? They (the weather gurus) are calling for another active Hurricane Season! Are you kidding me? That's great news for us (bad news for New Orleans). Is this because of Global warming? If it is...I say RIGHT ON Bring it on Mother Nature!!

Look, I know, some of you snowboard, ski and like to sit in a tiny wooden shack on a frozen lake and dig a hole in the ice and catch smelt while sucking down a six-pack of Budwieser. But I'm sorry. I'm digging this mild winter. It almost makes up for the fact that I may not travel to the tropics this winter. Hell, it's been good right here.

Congrats to Chuck Liddell...you are one Bad MoFo!

Today 2006 "SUPER BOWL" KEVLAR GET'S SHACKED!
Jack Fleming was the first photographer to send me photos this week. That's why he's up first. When I saw this first photo I said it was the BEST Barrel shot I have ever seen in New England. It's of new Surf Daddy Kevin "KEVLAR" Rafferty. And yes he made this wave. The sequence is inside on another page. Like I said, it was a SUPER BOWL WEEK of BARRELS! This is the first shot of many from this week Click here or on this photo for more of Jack's photos.
Photo by Jack Fleming

Today 2006 "SUPER BOWL" WEEK (February 1st, 2006) KEVLAR Sequence
This is the B&W sequence of Kevin Rafferty's BARREL ride. If Jack's photo (above) is the BEST Barrel Still I've ever seen of a surfer in New England, then this AMAZING sequence of the same ride and wave by Nick LaVecchia is the BEST BARREL SEQUENCE I have ever seen. To see more of Nick's amazing photos click here or on his photo sequence.
Photos by Nick LaVecchia 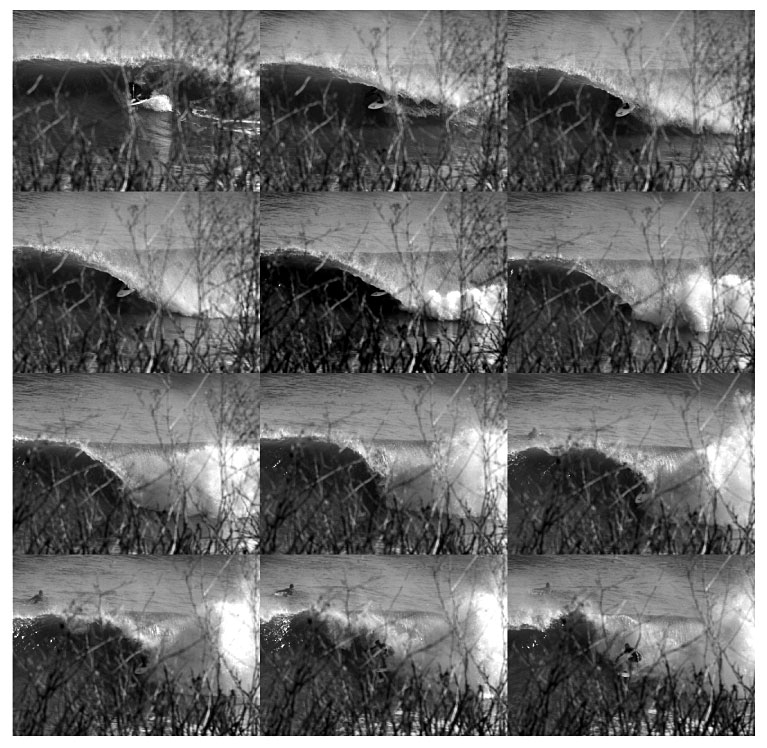 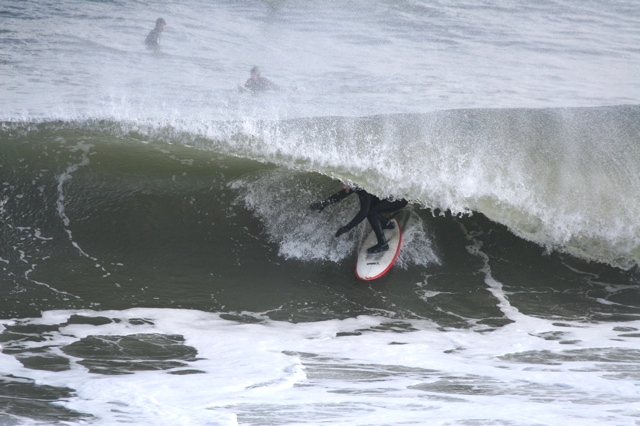 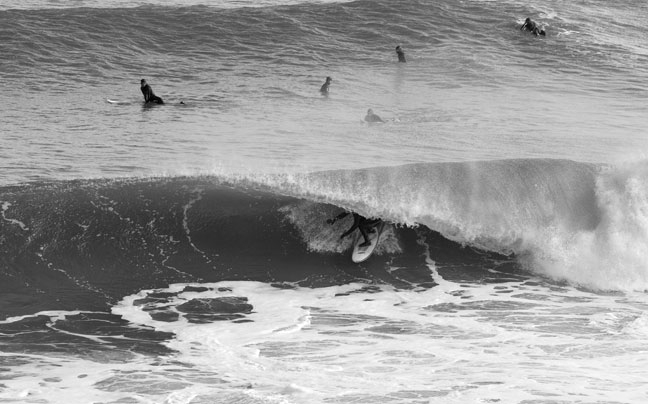 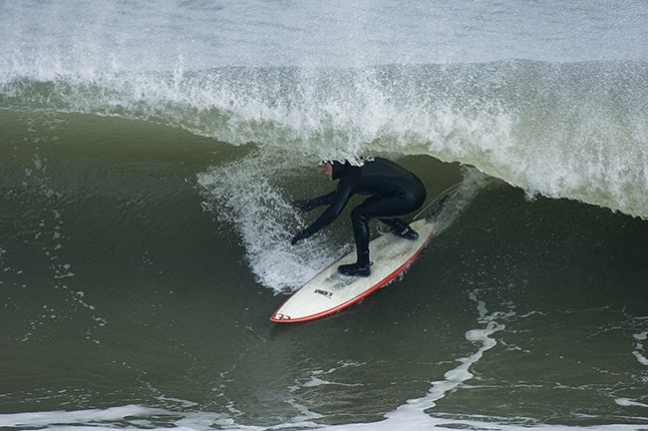 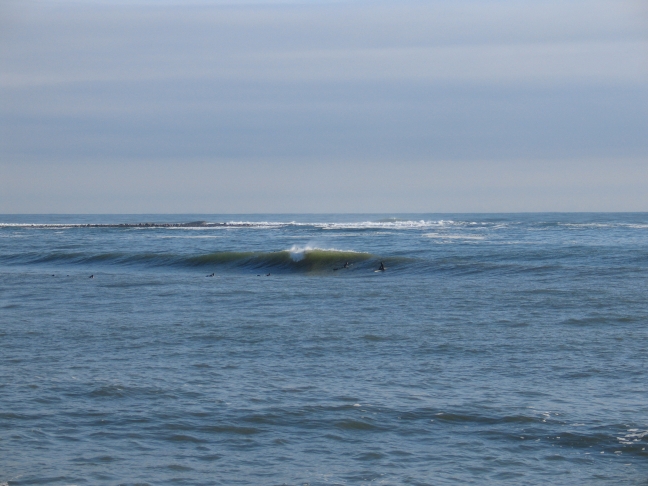 Today 2006 The Dream Peak
Does this look good to you? It does to us...
Photo courtesy of The Phantom

Today 2006 PARTING SHOT- February 1st, 2006
Why you didn't think I missed shooting this swell did you? Shame on you. Oh yea, I got the goods on Video.
Me and my trusty GL1 taking it all in...
Photo by SFOD R. Fatello 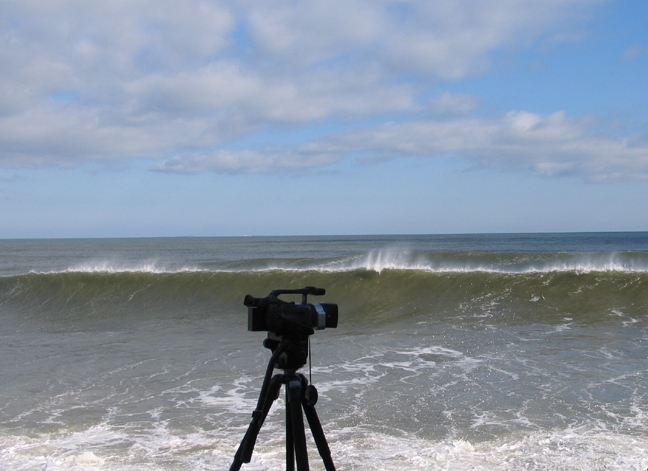