Last week the swell the came up on Monday. It was another treat for those of us who have become accustomed to such treats all winter. There were even decent waves on Tuesday the 5th. In fact, it was as fun and as perfect, as I've ever seen the Wall. My son Max and I enjoyed a perfect solitude soul session with just the two of us sharing a couple of well groomed peaks. We could see Jacko and a host of others down the beach. Jim was getting more than his fair share of waves. It felt like spring. The water was warming up and the sun felt good on our faces. At the end of our session, I remember looking at the sun setting in the West and thinking how fortunate we all are to be living here and enjoying these waves. Nothing could take this feeling from me I thought. It was that pure and honest of a vibe.

Later that night I spoke with some friends who shared the same feelings. It was all good and it was everywhere. Or so I thought. Little did I know, that a mere few miles up the coast, at the very moment I was feeling the jubilation of this clean Spring swell, a dear friend was passing away. A friend, who would of relished in all that I was feeling that day and more, was at the end of his journey here on earth. I'm speaking of Ray Hackett. Ray was 73 years old. I don't really know how many of you knew Ray or knew of him. But that's insignificant. Those who knew and loved Ray will tell you, he was a loving and kind human being who didn't have a bad bone in his body. He truly was a unique individual who loved this lifestyle of ours and everything it stood for. I mean to say, that Ray saw all the good in Surfing. He brought it out in his happy go lucky demeanor. Or, in his constant quest to shoot video of everyone who could stand on a surfboard.

That was how I met Ray.

As many of you may, or may not know. I shoot video. I've been shooting and making surf movies for a very long time. The first time I ever spoke with Ray was when I looked over my shoulder and saw him shooting at one of the more popular pointbreaks. He had an archaic VHS camcorder. A shoulder mount. The year was 1989. For the record. Ray started shooting video late in life. And this might seem odd to some of you. Ray never surfed. Or rather, he never stood up on a surfboard. He bodysurfed plenty though. Right through the 50's and 60's. To me, that was surfing. If you can ride a wave on a surfboard, bodyboard, or with your body well, that's surfing. Ray loved surfing.

Which brings me to my first meeting with Ray.

I remember thinking to myself, "Who is this guy?" I could hear him speak over the footage he was capturing. I also remember that he was shooting everyone and anyone. Trust me. No one does that. Nobody.

Yesterday 1996. Ray Hackett in the snow...shooting the surfers.
This is a video frame from my 99 to 90 movie. It's at the end of the movie and Ray was trudging through the snow when
I asked him if he had any words of wisdom for the Surfers back home. He just laughed and said "Keep Pumping!"
Video still by Ralph Fatello 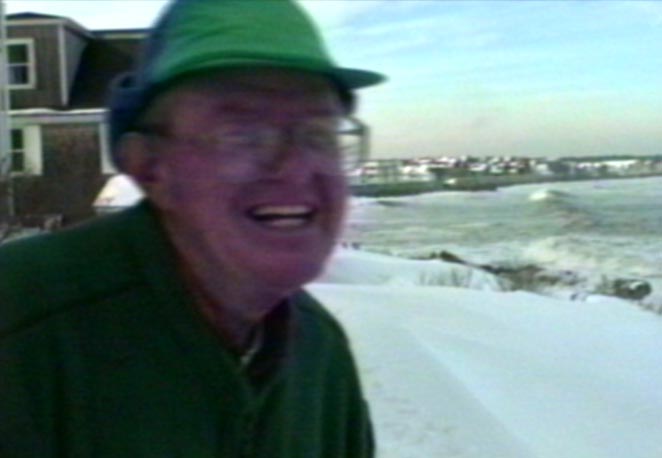 Yesterday 1995. Ray's Footage of some BIG Hurricane Surf down South.
This is another video frame from my 99 to 90 movie. It's one of Ray's shots. Ray shot some of the BIGGEST waves I have ever seen in New England. He traveled to Rhode Island with a bunch of New Hampshire boys and brought back the goods. Ray was especially proud of this footage. We used it in the 2nd tape/disk of 99 to 90. Ray, if you can read this...it's still still some of my favorite East Coast footage EVER!
Video still by Ray Hackett 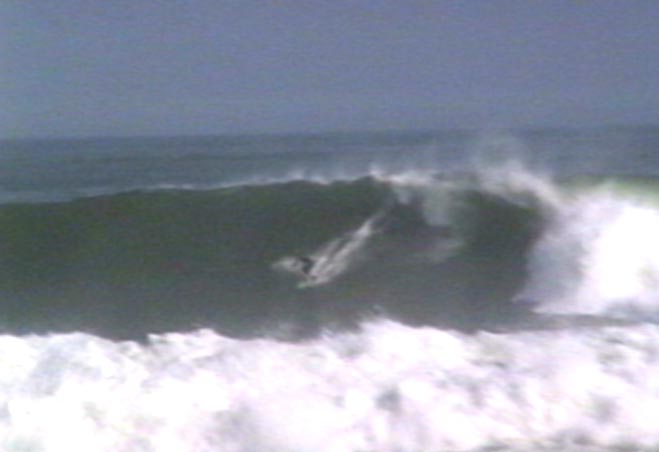 Today. Ray doing what Ray did.
This photo is the most recent one we have of Ray shooting video. You know where this is.
You also now know, that he was shooting anyone who caught a wave. Maybe it was you.
That's why we ALL NEED TO COME OUT on Sunday May 15th to Honor his memory.
Everybody loves Raymond.
Photo courtesy of The Hackett Family 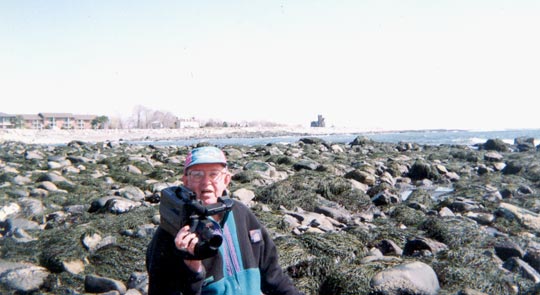 He was shooting anyone who caught a wave and it didn't make a difference if he could surf or not. Ray was pulling the trigger. My first reactions were of total disbelief. Then, eventually, over the months and years that followed, I became like everyone else who knew Ray Hackett. I loved his work and the man himself. His unique running dialogue over his 'seamless' footage was classic. His choice of music was also unique. I don't know many surf movie makers who would choose the Clarinet as surf movie music, but Ray did. And you know what? It worked with his stuff.

He shot tons of video in his short movie making career. A lot of you have some of his work. Ray became a fixture on the big days. He was a big man so he was not hard to spot. He wore those colorful hats and drove around in his vintage blue station wagon. We became good friends over the years. He was a true gentleman. When my two oldest kids were just 3 and 4 years old he'd take them for a rowboat ride around Rye harbor looking for Trolls under the bridge. My son told me this week, they (he and Gabby) believed that Trolls lived there. He'd send us colorful Christmas cards every year. And whenever he traveled to Mexico or Costa Rica, he'd send us postcards half written in Spanish. You see, Ray was a Spanish teacher. He could speak fluent Spanish. As his son Dan said on Saturday during his wonderful Eulogy. "My father's most endearing legacy was his students. He lived to teach his kids Spanish. He used music as a tool to teach his class." Indeed, Ray played his guitar and sang songs in Spanish for his students, his family and his friends.

I guess we were all his students. We just didn't know it. We will all miss Ray. Our little surf world will be a lot less colorful without him.

Because he truly loved Surfing and all Surfers, we as a community are planning a paddle for Ray. With the blessing of his loving wife Claudia and sons Chas and Dan and daughter Cathy, brother Bob and many in-laws, nephews, nieces and grandchildren. We will work with the family and make this happen for Ray. This will be a Seacoast Surf gathering and all the Shops and owners are onboard with this. Ray touched us all, whether you knew him or not. We have a tentative date of Sunday May 15th 9:00AM at the Rocks. We'll let you know more details as we get closer. Meanwhile, say a prayer for the Hackett family and know that they all love and appreciate what you do. Surf.

Click On Wave to Go Back to The Top.
Today 2005. Monday's Spring Swell
The place? The Wall. The Surfer? We don't know. Do you know? We do know who shot it though.
Photo by Mark Mortimer 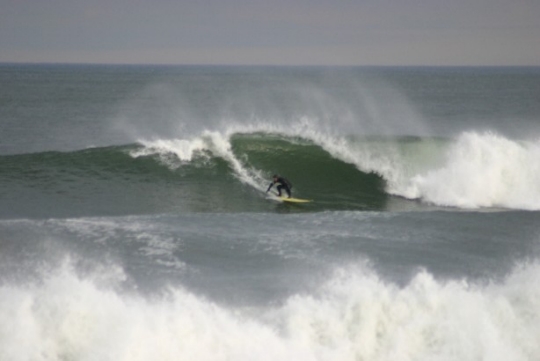 Today 2005. Costa Rica
This one's for Ray. He loved Costa Rica and the beautiful surf there. This is a beautiful photo.
Thanks Nick for sending this to us.
Photo by Nick LaVecchia 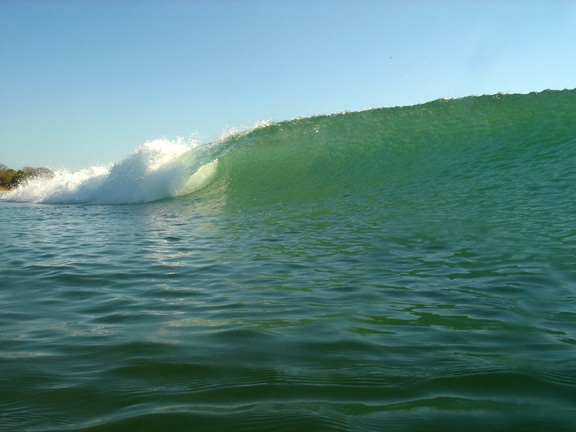 Today 2005. One More from the Left State
Vermont transplant Randy Gaetano now lives in Costa Rica with his wife and family. Why would anyone
want to leave Vermont for Costa Rica is beyond me. Yet, that's exactly what Randy did. Got any room for
my family Randy? Hello? Randy...? Nick...?
Photo Nick LaVecchia 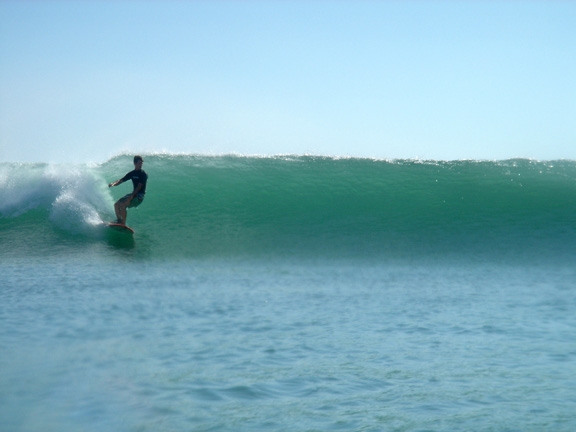