Tis the season to be jolly! And what a jolly season it's been so far! Man, I don't recall ever attending this many parties in my life! Seriously, there were back to back parties for so many days in a row! All of them big and festive! It was great being around so many Surfers who have so many things in common. With the single most important element being, the true friendship that we have for each other. So many friends and neighbors, all with a love and passion for surfing. There we all were, gathering around the egg nog and other holiday drinks to share a good laugh (sometimes at the expense of another friend) but, it's all in good fun.

I even got to play my guitar at one event. At the very successful Thank You Jacko Benefit at the Legion Hall! The band King's Highway featuring Crop, Paul, Steve, Johnny and Salt let me sit in for a few songs at the end of the night. That was a treat. It was also a reminder to myself, of how much I enjoy playing my guitar. I do miss it. Maybe someday The Nor'easters will get back to together again for a show. Or, maybe one of my other musical projects will finally come together. Like The Barrels. We'll see.

Meanwhile, I know that some of you have been casually mentioning my slacking off the last couple of weeks in my column,( Adam, Jeff the Westie) and a few others. My brothers, it's the holiday season and I'm wrapped up in the Holiday madness. Ya gots ta give a brother a break during this festive time of year. Besides, all them dang parties we're liking to kill me. I was in the partying mood.

I finally got around to posting some of the photos from the trip Max and I took to Central California.They are mostly frame grabs ffrom the video I shot. But I think you'll pick up on the overall vibe. Those West Coast boys remind me of what we all have out here. Surfers are surfers. And those guys are no different than us. They just have warmer water. A lot warmer. But heck! Who needs warm water? Ha!

Yesterday 1976. Joe Collins, Surfing The Lynnway.
Joe Collins recently returned from Iraq and had some spare time on his hands, he found these old gems of himself surfing at Lynn Beach on the North Shore of Massachusetts. Now before you start groaning about surfing in Lynn Mass, let me tell you all something. I surfed there plenty of times in the past. In fact, I caught my very first wave there. Long before there was that funky beach stank, there was good surf there. I can recall many a day seeing big perfectly groomed lines pouring onto those sand bars. Yes I had some fond memories of that stretch of coastline. These photos don't really capture those good days. They do however, capture the soul of surfing on the North Shore in the summer. photos courtesy of Joe Collins 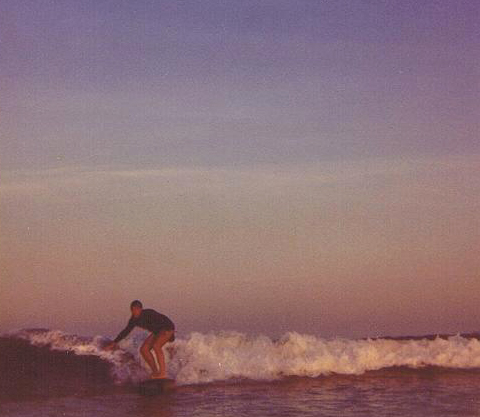 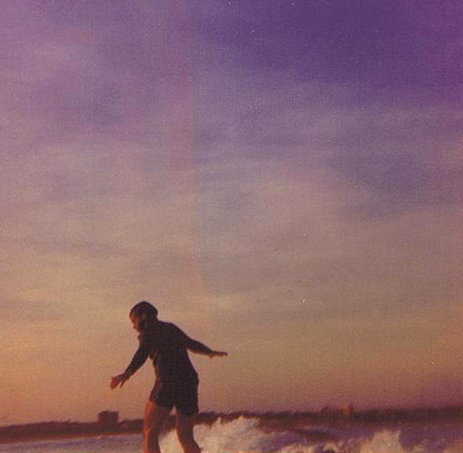 Today 2004. Max Fatello and his Sashi 5-Star Smacking one for the Easties Back Home!
Young Max Fatello age 13, samples some of California's best lefts. Representing New Hampshire, Max held his own in all conditions and at all the different spots during our short stay. It was a great trip, spending time with some very good friends and we can't wait to go back! Video Frame Grabs by Ralph Fatello

Adam was saying to me the other night at Jumping Jack Fleming's awesome gathering was how much he enjoyed reading what I wrote in this weekly column. The Red Sox and Patriots...wait did I say Red Sox? Oh baby. What the hell got inside Pedro's tiny head? I mean....come on! The Mets? Leaving a World Series Championship team where the fans love you, for a bunch of lowlife losers whose fans and media will turn on you like the fool you are? Hello? I guess it's true. It's not about loyalty and team spirit. It's not about the true hardcore fans who stick by you through thick and thin. It's about one thing and one thing only. MONEY. It's sad. (Jack you laughing at that line? Sad?) I'll tell you one thing. I'll make dam sure my kids see the clear picture in all of this. That overrated sports figures who couldn't do anything else in life to earn a living, get paid an extraordinary amount of money for doing something they love to do. And they don't give a dam about anyone but that big Fat paycheck.

Imagine getting paid $54million for 4 years to surf in contests? How crazy would that be? Wait, if my kid could get that kind of money surfing, than you can color my butt long gone! Where do we sign up? I'm kidding. I wouldn't leave this place for that kind of money. The hell I wouldn't! So really, who's at fault? The owners? The fans? The players? The agents? Where and when will this madness stop in organized sports? Lord only knows. Hey speaking of sports. I lost the Mall Game to Jacko. It was close and it was riddled with controversy. But like the true sportsman that I am. I acknowledged my defeat and paid the piper. Jack is a good Mall Player. He makes all the right moves during the off season. Whereas, I tend to let things slide until a week or two before the season starts. The judging was once again handled by the Honorable Judge John Meehan and although, some would say, that there is a biased intention on his part, I was in agreement towards the end of regulation time. That Jacko, did in fact, beat me fair and square at the end. Like they say..."There's always next year!"

Don't forget at the end of 13POINT5 (after the credits) to watch the bonus footage of the Red Bull Contest. 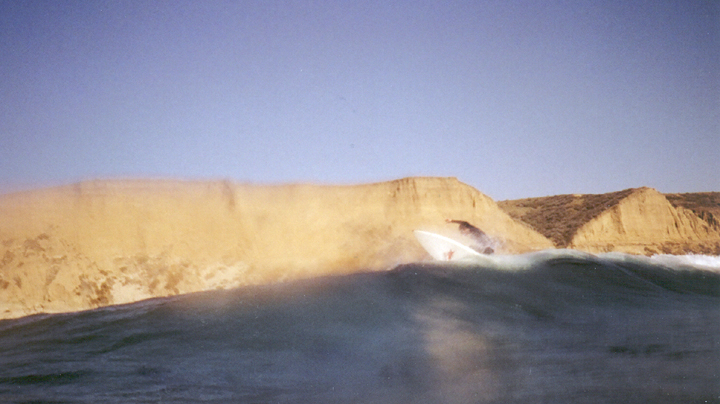 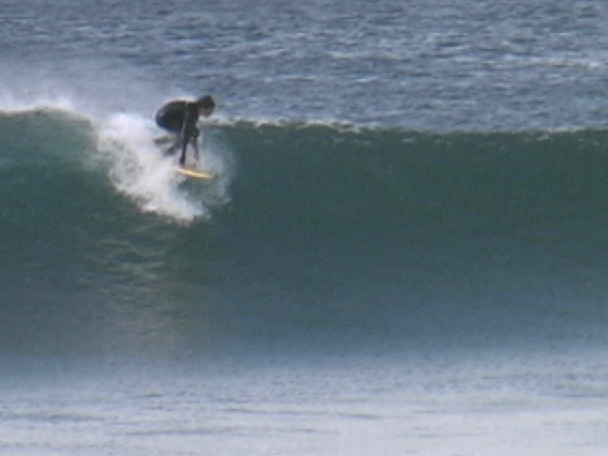 Max Taking Off and Heading East 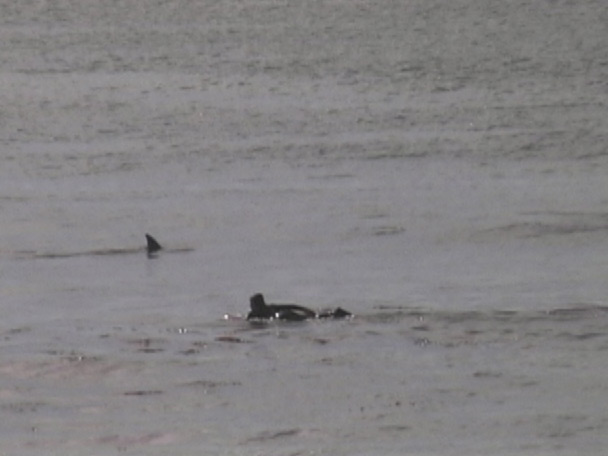 Max and Friend sharing the line-up. *Note -I don't care who you are, the first time a Dolphin this big pops up next to you when your paddling out, your heart stops. 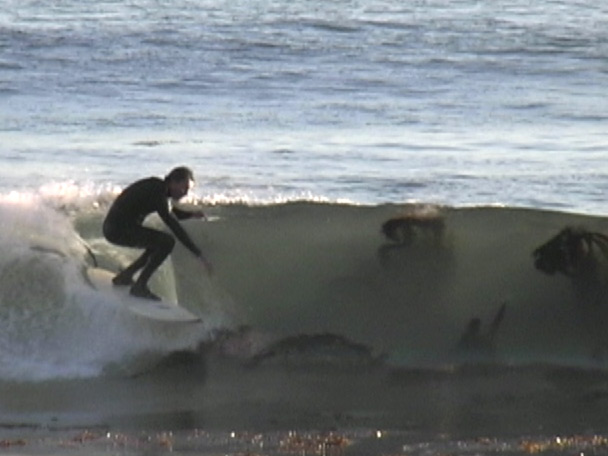 Maine Transplant Ron Freeman is very Cat Like in the Glassy Kelp Waves of His Fave Break
Today 2004. The Over 50 Crowd Can Still Rip Out West.
The whole reason we went out West 2 weeks ago was to celebrate my buddy turning 50. Ok that wasn't the ONLY reason, but it was the main reason. These guys can still surf pretty good for being 50. photos by Ralph Fatello 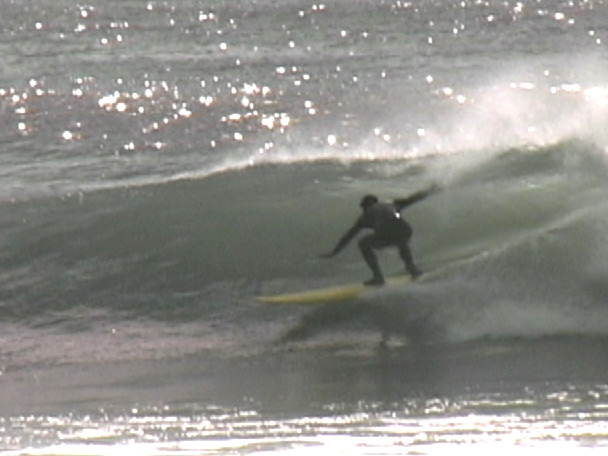 Doug Hendry Shifting Into 5th Gear...much like that new Porsche he Drives around In. 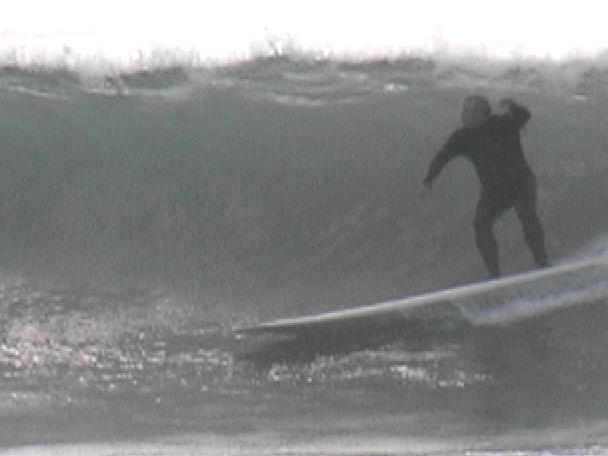 The Man "Jeff Chamberlain" Sliding down the face on a board that most of us couldn't even carry let alone surf. 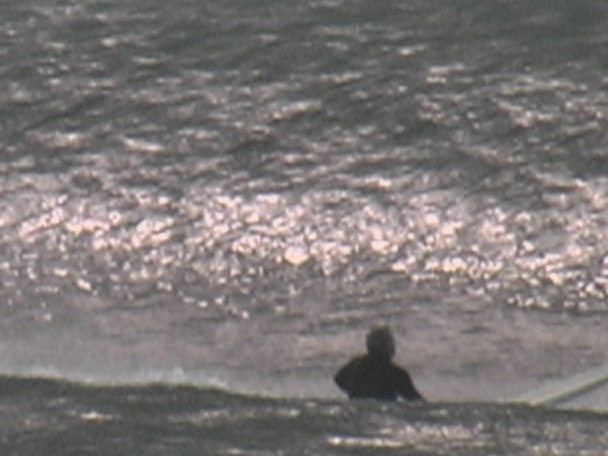 The Big man Faces Down a Big Wave. Jeff swinging into a set wave at Lefty's