August 23rd, 2004
Can you say "Keep your mouth shut?"Last week I opened my mouth about our active Hurricane Season and ever since I did, the tropics have shut down. Sorry. But none of you intelligent readers really believed I had anything to do with this do you? Come on!

Speaking of weather...how about those wild Thunder and Lightening Storms? Yikes! Some of those boomers had my house rocking! It was intense to say the least. Nothing to fool with those electrical storms. I hope all of you are aware of the dangers involved with Lightening. Take it from someone who knows...there's nothing funny about 'em. Suffice to say. If you hear Thunder and you're out surfing GET OUT OF THE WATER.

How many of you saw the flick RIDING GIANTS last week? I don't know about you, but I'm not exactly thinking I'm ready to surf something like that. Big wave surfing is a whole other animal. Especially Mavericks and Jaws! Are you kidding me? That wave at Mavericks looks scary from every angle. It just don't seem right.

And those waves at JAWS? I don't think so.I don't care how many jet skis and helicopters are buzzing around you. You get caught by one of those waves...you are on your own. And that Freak of a wave in Tahiti...as many times as we've all seen that thing it still sends a shiver up my spine. That thing is SICK!


Yesterday. JACK "Jacko" KEEFE
Jack Keefe has been surfing the Wall as long as anyone I know. Consistantly surfing. Year after year. Swell after Swell. He owns that sandbar between 8th and 6th street. Everyone knows and respects Jack. Respect-that's the key word. If you're Jack's friend, he has your back. Just like you have his. This image is from the movie Surfing the Soul. It's late 70's or very early 80's. And Jack is in control. Again.
Video still from the Movie Surfing The Soul by SFOD 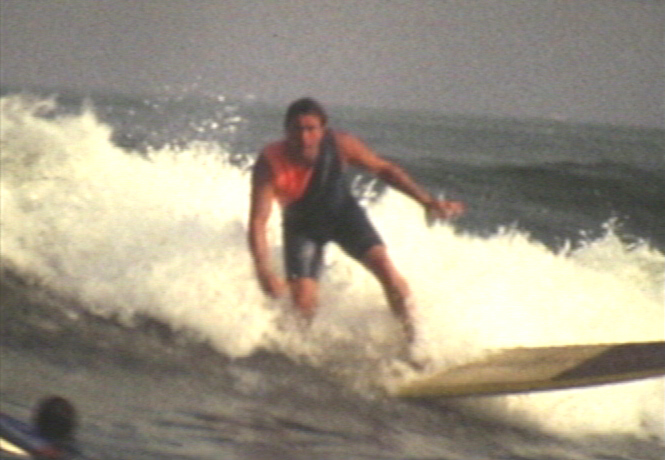 Today. SNOW CAPPED TAKE-OFF 2004
Taken last week in New Zealand. Andrew says his friends were getting the longest rides of their lives this day. Not hard to believe. The world is a big and wonderful globe. You owe it to yourselves to go out and seek places like this. Just remember to be good to those who came before you.

Photo courtesy of Andrew Rea and by SURF.CO.NZ

Out of that whole room full of surfers at the Music Hall the other night, there was only one person in that audience who could relate to that movie. Jay Gould. He's the only person I know who's surfed BIG Mavericks. At one point during the movie I looked over my shoulder at Jay and he was transfixed on the screen like a stoked Grom. Grinning from ear to ear. I was shuddering at the thought of getting caught by one of those monster Maverick sets and Jay was thinking just the opposite. Jay...he's so stoked on life and surfing. Jay had a great opening at the New Flatbread Company in Portsmouth two weeks ago. He was beaming all night. He was in his glory at the movie too!

But life has a funny way of balancing things out. Last week, Jay was dealt a stunning blow. His beloved father Bud passed away. Bud was one of the best. He was one of the World's Greatest Generation. Bud served proudly during WWII. A true, classic, individual. Everyone who knew Bud, loved him. Everyone. He lived on the ocean and loved every waking minute of it. He was a loving husband, father and grandfather.

He passed away listening to the sounds of the Ocean.
How beautiful is that?

On behalf of the entire Surfing Community, we want to extend our sincere condolences to the Gould family.

Today. BACK HOME-ON YOUR BELLY AND ON YOUR FEET!
Taken during the last couple of swells. The Boogie Man is from James Reidy who was apologetic for riding a Boogie Board! No worries James. There's nothing wrong with lying low. Besides...don't the waves look bigger down there? My take on Boogie Boarding is this. It's still surfing. And if you're having fun...it's CLEARLY Surfing! So have a go at it mate! Just don't drop in on anyone! The same rules apply to everyone.
Photo courtesy of James Reidy

This photo is of Jim Dunn's nephew first ever wave. His name is Riley. How many of you wish you had a photo of your very first wave? Think he's stoked? Think Jimmy's a proud uncle? The torch gets passed again.
Photo courtesy of Jim Dunn. 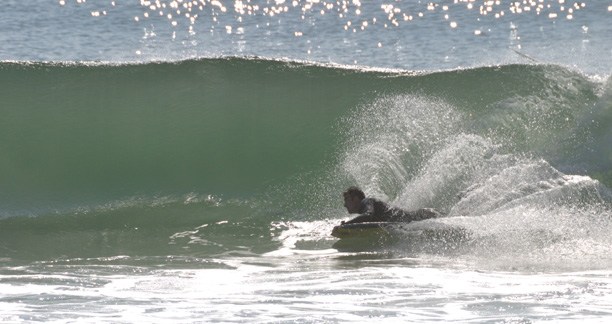 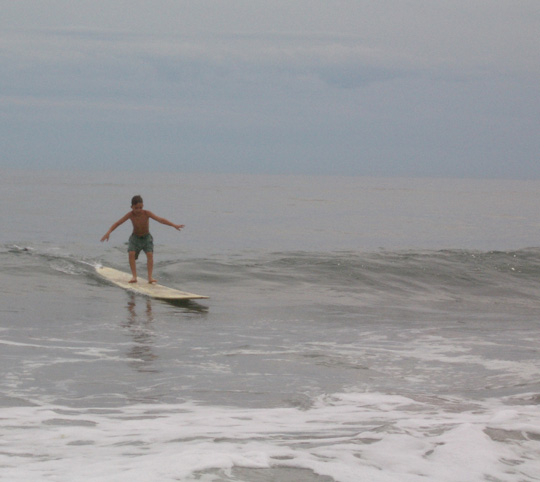